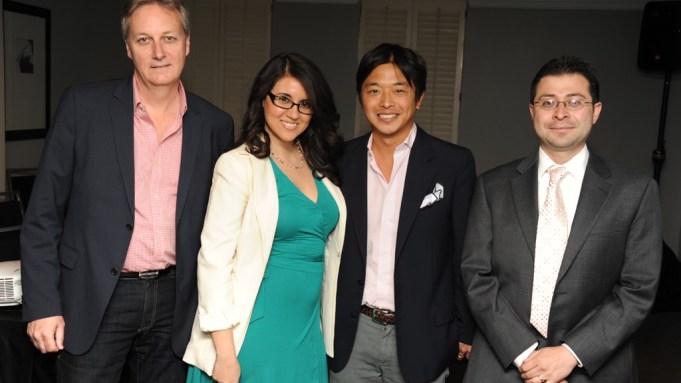 NEW YORK — E-commerce, mobile commerce, social media and its impact on consumer buying were the big topics at a seminar staged by the Underfashion Club here Tuesday evening.

Lingerie and related products, including sleepwear, robes and loungewear, are expected to continue as key categories of growth as shopping online becomes more of a customized and personalized platform for brands, merchants and consumers.

The event at the St. Giles Hotel in Manhattan pulled in more than 100 innerwear executives who were eager to get updates on the world of online retailing. Speakers included Ken C. Natori, vice president of finance at the Natori Co.; Kevin Doyle, vice president of e-commerce practice at Trifecta Technologies, and Layla L’obatti, president of Between the Sheets Lingerie. The presentation was moderated by Luis Paredes, publisher of The Lingerie Journal.

The seminar kicked off with a few eye opening statistics.

• $30 billion in retail sales are projected to be generated by social commerce by 2015, according to Booz and Co.

• By 2016, Forrester Research predicts, total e-retail spending will increase 62 percent, while consumer purchases online are projected to hit $327 billion. The number of U.S. consumers who will shop online will be 192 million by 2016.

• The United States Census Bureau estimates that the world population exceeded 7 billion on March 12, The Nielsen Co. said. By the end of 2012, there will be more cell phones on the planet than people.

L’obatti, a graduate of the Fashion Institute of Technology and a recipient of an FIT scholarship from the Underfashion Club, said her knowledge of technology made starting up the btslingerie.com business in 2008 easier during a recession.

“From the beginning, I knew that my knowledge of the Internet gave me an edge. I wanted to market myself, and designing a Web site was one of the first things I did. I created a blog in 2009, which basically is a press release to consumers.…A blog is the face of a company, but in a behind-the-scenes way,” L’obatti told the audience.

She said it was important to follow up with social media gathering, especially on Twitter, and she tweeted constantly.

But at the beginning it was like “tweeting in a big crowded room and no one is listening to you,” she quipped. Today L’obatti has more than 500 Twitter followers and uses the handle @LingerieLayla.

“Social media really helped to distill the essence of the brand. I exhibited at the Curve show in August 2009, and I discovered that a lot of the retailers I met there I knew from online networking.…Today, it really matters to stores that you’re active and interactive with consumers,” explained L’obatti.

“You can develop a list of stores stalking you and your brand on Foursquare.…It’s one of the many social media platforms you can be on,” she said.

Doyle, a 15-year veteran of IBM, said he created the e-commerce practice platform for Trifecta Technologies to fill a niche in the midmarket sector. Among the firm’s clients is Wacoal America, the U.S. unit of Japanese innerwear giant Wacoal Holdings Corp. “Not everybody is a Wal-Mart or a Staples.…We created a business for the midmarket to make it more affordable for clients,” said Doyle. “Launching an e-commerce site is one of the most exciting and scariest things to do because you are taking every part of your company to the Web so people can use it as self-service. Social networking is a big part of it, and establishing direct relationships with consumers is about expanding the brand. You can use it for events like ‘Fit for the Cure’ that Wacoal does.”

Regarding emerging trends, Doyle said he believes a growing trend will be product customization for niche product segments and for consumers who want one-of-a-kind items.

“An example is Shopvarsity.com, where cheerleader uniforms are being designed by consumers.…It’s being used by a mobile sales staff of 175 right now but will probably be turned on for the general public later this year,” said Doyle.

Addressing his family’s business, Natori, a former executive in the world of finance, joined the firm in 2007 and quickly found himself leading an online initiative. His first project was to upgrade and relaunch the natori.com Web site.

“I joined Natori to learn about the business, and started in the finance department, but we needed somebody to take care of our Web business, which had static images.…We decided we needed to tackle e-commerce and do it quickly,” said Natori. “The focus of the business model was on wholesale operations, and we wanted to make sure that it would not divert too much attention away from our core [retail] business. We wanted to work in harmony with our retail partners.”

Natori said he looked at two options: an in-house initiative or taking on a “turnkey” partner who would build a site, produce, buy, distribute goods, and at the end of each month “make a very substantial commission.”

“We got cold feet and decided to do it ourselves.…In April 2008, the site was relaunched with basic sleepwear and we got great customer feedback.…Through the years we’ve added categories to the site, and this spring every single collection became available online,” said Natori. “We also launched microsites with josiebynatori.com in August 2009, and nbynatori in August 2011.”

Natori further noted that the company’s online business has been boosted with user-friendly technologies such as RichFX, which allows a viewer to zoom in for a close-up of fabric and detailing.

“Our ChatLive [technology] with customer service representatives has been very popular.…We are also mobile optimized, and our site works fine with any device,” he said, noting that the josieblog.com blog has been gaining traction.

“But we’ve discovered that we need more than e-commerce. Our strategy has been to generate content,” he said.