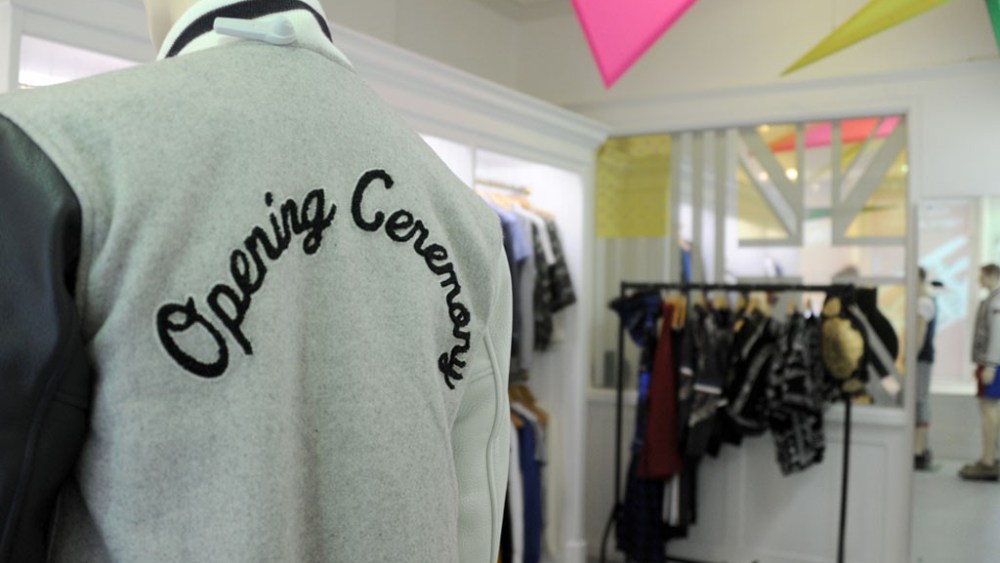 LONDON — Opening Ceremony is planting its multihued, animal-print flag in London this week with the opening of its first European outpost, in Covent Garden.

The 3,000-square-foot pop-up store at 31-32 King Street — in a former Hackett store — will operate until October, when a larger, permanent unit is set to open a few doors away. The move to London marks the 10-year anniversary of the store, which already has outposts in New York, Los Angeles and Tokyo.

The pop-up, which spans two levels, is packed with exclusive, 2012 Olympics-themed ready-to-wear and accessories, such as the Proenza Schouler PS1 bag reworked in shiny gold, and Barton Perreira sunglasses in gold, silver or bronze.

It also stocks the store’s best-selling capsule collections from days past, including colorful, graphic Vans by Kenzo, animal-print ponyskin Keds and Opening Ceremony own-label cat sweaters, which have been reissued in new colors and in men’s sizes.

“We’ve wanted to open in Europe for quite some time — we’ve got a good wholesale business here already, and a really big British customer base online,” said Carol Lim, who co-founded the store with Humberto Leon, during a walk-through.

Opening Ceremony products and collaborations are sold in stores such as Liberty, Harvey Nichols, Browns, Selfridges and Matches.

Leon added that the store is very much about the American and international roots of Opening Ceremony — there are myriad new and updated archive pieces by Norma Kamali, reversible dresses by Kenzo, Reyn Spooner Aloha shirts, Pendleton blankets and bags.

However, Leon and Lim said they are eager to support emerging British talent as well, such as Christopher Shannon, Lou Dalton and Henry Holland, who’s done a red, white and blue Olympics-inspired capsule collection for Opening Ceremony. “I want this to be a home for them, too,” he said.

As for the Covent Garden location — where brands such as Burberry Brit, Ralph Lauren Rugby and Apple have recently opened — the word in London was that the shop was looking to lay down roots in the East, but Leon and Lim plumped for a more central location instead.

“We love East London, but we wanted something central, so everyone could come. We see this as an accessible collection, and wanted the store’s location to be the same,” said Leon.

The shop, designed in-house, has white interiors, a flurry of colored flags stretched across wooden frames and stairs emblazoned with the words from the Bananarama song “Hey Young London.”

“We wanted it supersimple, no waste, quick, fun, light and easy. I hate the idea of building something, tearing it down and throwing it away,” Leon said. The London-based designer Faye Toogood designed the tables, lean minimal chairs and whimsical wood-and-string cages that showcase jewelry by designers such as Delfina Delettrez and Pamela Love.

The store also features the new children’s collection and stacks of small goodies such as Band-Aids with animal prints, Olympics-themed mugs, key chains and toy eyeballs.

On the lower level, there is a Claire de Rouen bookshop that reflects Leon’s and Lim’s literary aspirations. In August, OC Annual, a new collectible fashion-and-culture magazine, will launch, with a focus on sports.

On Sept. 4, the brand will launch a 300-page illustrated book with Rizzoli to mark the 10-year anniversary. The book will feature original photography by Terry Richardson, and contributions from Chloë Sevigny and Spike Jonze.