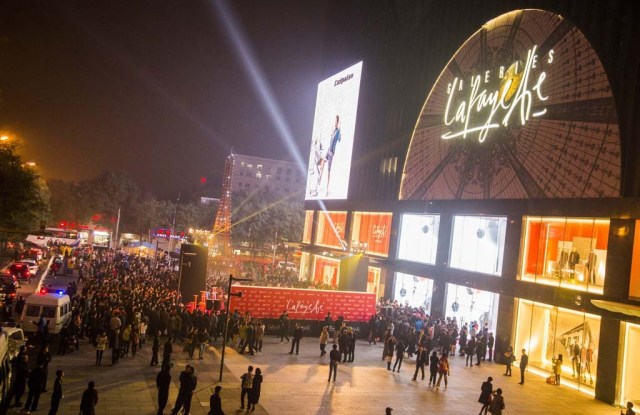 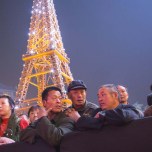 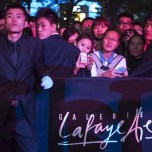 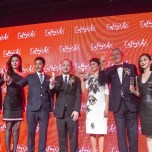 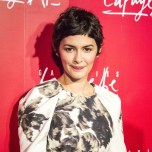 BEIJING — Throngs of enthralled Beijingers gathered around a glittering replica of the Eiffel Tower Friday night in the center of the Chinese capital for a glimpse of the city’s latest shopping showpiece — Galeries Lafayette’s newly opened 350,000-square-foot department store.

Though the department store is new to many in China, the brand is well known to the country’s high-fashion set, many of whom have traveled to Paris for shopping sprees at its flagship. The Beijing store, the company’s 65th worldwide, will feature 500 shops-in-shop and is second in size only to the Paris one. A ring of police held onlookers in check, as executives spoke from the podium and watched a dynamic traditional Chinese dragon dance. Security did not seem to dampen enthusiasm.

“I visited the original in Paris last summer, and was very happy to know they were bringing this department store to Beijing,” said Li Tiancheng, a 23-year-old who waited with hundreds of others outside the mall as company executives and celebrities filed in for the opening. Li and her friends laughed about not needing to go to Paris to shop anymore.

Still, prices in Beijing are apt to be higher than Paris, given duties and the general higher cost of clothing and luxury items in China. That fact did not deter the curiosity of hundreds who turned out for the six-story department store’s opening.

In addition to the wide range of shops, the store has nine Asian and French restaurants, and one item certain to appeal to the maturing tastes of Chinese elite shoppers: a Bordeaux wine library.

The opening comes after three years of work, he said, and “symbolizes the group’s international growth strategy. Building on our strong retail expertise and strengthened by our partnership with I.T Ltd., we are bringing to China the unique concept of the department store à la Française, in order to satisfy the needs and desires of Chinese customers.”