Opening the Gates to a Retail Rush

NEW YORK — When Barneys New York general manager Kevin Dyson stopped by the Madison Avenue flagship on Saturday, he had to do a double take. The level of activity suggested Christmas Eve, not an ordinary weekend in February. 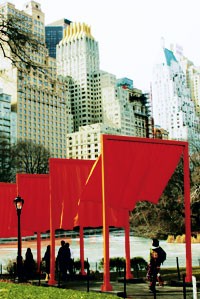 NEW YORK — When Barneys New York general manager Kevin Dyson stopped by the Madison Avenue flagship on Saturday, he had to do a double take. The level of activity suggested Christmas Eve, not an ordinary weekend in February.

Dyson credits Christo and Jeanne-Claude’s environmental art work “The Gates, Central Park, New York, 1979-2005,” for some of the traffic. “I had the best weekend,” he said. “There were a lot of Europeans and they bought. We had a very healthy increase over last year, well into the double digits for the weekend. It was the perfect crowd for Barneys — arty and fashionable.”

The spectacle of 7,500 saffron-colored fabric panels fluttering along 23 miles of footpaths in the park has beckoned hundreds of thousands of viewers, a United Nations of tourists and locals. When all is said and done, “The Gates” may have the distinction of being one of the most successful events in the city’s recent history in terms of fueling the local economy.

“I can’t recall an event that will have brought in so many visitors over a 10-day period,” said Jonathan Tisch, chairman of NYC & Co. and chairman and chief executive officer of Loews Hotels. “About 14 percent of all visitors are from international destinations, but they’re responsible for about 45 percent of the visitors’ spend. The weak dollar coupled with an attraction like ‘The Gates’ is an open-ended invitation for people to come to New York City and bring their dollars.”

Orange certainly appears to be the new green.

The Economic Development Corporation estimates the project will bring the city $80 million in revenue in hotels, restaurants and stores.

Opening weekend brought huge crowds. Doug Blonsky, president of the Central Park Conservancy and Central Park Administrator, said 350,000 people visited the park on Saturday and 450,000 on Sunday. On Wednesday, the New York City Department of Parks and Recreation reported that over 1 million people had been to the park since Saturday.

The conservancy’s licensed “Gates” merchandise — which includes posters, signed and unsigned by the artists; hats; T-shirts; sweatshirts; commemorative maps; mugs; belts, and watches — is selling briskly. “We ran out of some of our better-selling items like the hats,” said Blonsky, “but we’ve already restocked.”

Henri Bendel’s Citrus Punch promotion serendipitously coincides with “The Gates” as it celebrates the color orange. The store has seen an increase in sales of orange cashmere sweaters and orange lingerie.

“I’d love to say that we planned it that way,” said a spokeswoman.

Hermès since Jan. 20 has been previewing in its fourth floor gallery a documentary about the making of “The Gates” by Albert Maysles and Antonio Ferrera. The store hosted discussions with the artists and filmmakers and produced a commemorative scarf to benefit Nurture New York’s Nature Inc. An oversize print of the scarf pattern is displayed in one of the store’s Madison Avenue windows.

“We’ve seen a nice jump in our business, with very strong double-digit increases,” said Robert Chavez,  president and ceo of Hermès U.S.A. “Some of it has to do with Valentine’s Day falling on Monday.”

Bloomingdale’s experienced double-digit gains on Sunday at its restaurants and in the 59th Street flagship, a spokeswoman said. “Something of this magnitude is bound to affect all facets of business,” she explained. “This will have a bigger impact than the Republican National Convention, where all of the festivities were taking place in other parts of the city.”

The effect of “The Gates” is even being felt in neighborhoods that are far from the park. At Macy’s, a bump in international customers was noted by Patti Lee, senior vice president and general manager of the Herald Square flagship, who said tourists are buying status brands, shoes, handbags and cosmetics.

International group sales at the Hotel Pennsylvania, where rooms start at about $135, totaled 1,000 room nights for the period “The Gates” is on display, until Feb. 27. At the Mandarin Oriental Hotel, where a deluxe room costs $685 a night, occupancies are “far above February projections,” said a spokeswoman. “We have a very global clientele. We’re seeing lots of people from the United Kingdom and there’s a big German interest because of associations to the Reichstag project. [Christo and Jeanne-Claude wrapped the building in 1995.] They have a very international pull. Europeans are really taking advantage of the strong euro. We have high end shopping right here.”

Lord & Taylor’s senior vice president of fashion merchandising, LaVelle Olexa, summed up the appeal of “The Gates”: “Whether you like it or not, whether you consider it art or not, it’s a happening and New York loves a happening. It’s energy and it’s exciting.