Dab a bit of orange onto Oscar de la Renta, as in Orange County, Calif. 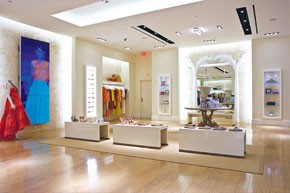 Dab a bit of orange onto Oscar de la Renta, as in Orange County, Calif.

The designer has opened his second West Coast store in a 2,700-square-foot space at South Coast Plaza in Costa Mesa.

“We’ve been looking at Orange County for some time, and it was the only location we were serious about,” said Alex Bolen, chief executive officer of Oscar de la Renta. “It took some time because there’s a long line of people waiting to get in there. Shopping centers are not typically our strategy, we like to have our own space and be a destination.” He described the new store as a destination within a destination.

The store is in a new area on the upper floor of South Coast Plaza dubbed “The Penthouse,” which devotes 22,000 square feet to luxury retailers. Others slated to join the lineup include St. John and Canali.

The boutique, which opened this month, was celebrated at a cocktail reception and fashion show on March 13, attended by about 200 people, including Bolen and his wife, Eliza, who is de la Renta’s stepdaughter.

Oscar de la Renta has stores on Madison Avenue in Manhattan, and at The Americana Manhasset in Manhasset, N.Y., Bal Harbour Shops in Florida, NorthPark Center in Dallas, the Wynn Resort in Las Vegas and on Melrose Place in Los Angeles, as well as an outlet store in Woodbury Commons in Central Valley, N.Y. An Atlanta boutique is planned for fall 2009.

“If I had the capital we could open 15 stores, but if we added three to four stores in the next year that would be a lot for us and we’re certainly not going to do more than that,” Bolen said.

The store will stock a range of items, including a navy cashmere silk sleeveless sweater for $1,990, cream silk crepe pants for $1,350, a white embroidered tulle dress for $8,590 and crisscross strap sandals for $655.

The look of the brand’s stores was developed by de la Renta himself, and while each location is different, all use coral from a quarry near his home in the Dominican Republic. Wood and bronze are used throughout the stores, as well.

The current economic climate is creating headaches for retailers, even in the luxury sector, and Bolen acknowledged the potential effects.

“Depending on severity and length of any recession, it will have an impact on luxury goods,” Bolen said. “A long one will certainly cut into our market.”

The brand is intensifying its focus on international expansion, though Bolen said large U.S. retail hubs like Ala Moana Center in Honolulu could be a good fit.

“Asia and the Middle East are fast-growing markets, but let’s face facts: We don’t have a store in London yet, so there are some more tried-and-true markets we need to look at first,” he said. “Western Europe is where we’re looking now. There may be higher rents but there’s less risk associated with operating in those locations.”

Bolen added, “Our preference is to retain control, but there are some places where it makes sense to work with a partner internationally. There won’t be franchising in the U.S.”

South Coast Plaza is known as a strong handbag market, and the store will unveil some offerings in that category, Bolen said. Fine jewelry is an area that is growing in importance, and there will be an expanded line for fall.