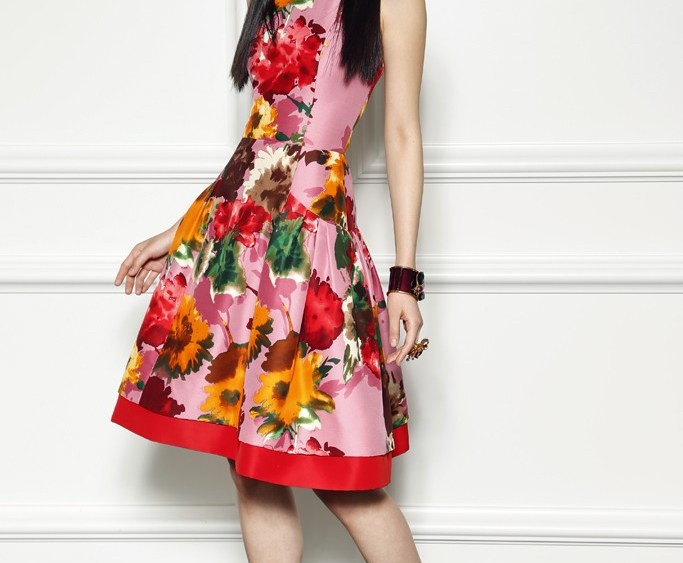 Through a partnership with The Outnet, one of three sites under the Compagnie Financière Richemont SA-owned Net-a-porter umbrella, the designer brand on Feb. 26 will unveil its first 24-piece offering created specifically for the outlet sector. More approachably priced than de la Renta’s main collection — where dresses typically cost upward of several thousand dollars — Oscar de la Renta for The Outnet will range from $325 to $1,295, with the bulk of the dresses set to retail at less than $1,000.

“Currently, the brand’s outlet model is driven by surplus merchandise, and this marks the first time product has been actively developed for this channel of trade,” Oscar de la Renta chief executive officer Alex Bolen told WWD. Right now the company’s sole outlet store is located in Central Valley, N.Y.’s Woodbury Common Premium Outlets, but Bolen added that he’s “very seriously thinking about” opening a second outlet in the U.S., as well as bringing the off-price experience to Europe. He was surprised to learn that some of the best outlet customers were also the best customers on Madison Avenue.

“We have things around here that are underutilized — [such as] 40 years of patterns, fabrics and artwork that a lot of people spent time on. We thought, perhaps we can put something together in a way that is new, that doesn’t require as much development time and in an exclusive way,” Bolen said. “[But] the thing we have to be careful about is that we don’t want to dumb down our product or offer the same thing at two different prices.”

He is clear that a different cost structure exists for the line, and this offering doesn’t have the same development costs of the main collection that will walk down the runway Feb. 12 during New York Fashion Week.

While Oscar de la Renta for The Outnet uses the same fabrics, the same patterns and is made in the same factory as the main collection, they are all past fabrics and past patterns for the outlet. Bolen explained that for the main collection, the graphic design team develops the prints and the company pays for the runway show, a model to wear it, a second sample and a pattern maker. But in this case, because the fabric and pattern already exist, the brand has “sunk all those costs.”

The prints in the outlet line are quintessentially Oscar — such as ikat in two colorways and ladylike florals set against navy or dusty-rose backdrops. The collection is nearly half dresses — there are 11 total, and silhouettes range from a $995 sleeveless and full-skirted style to an $895 sleek and formfitting leopard-print shift.

A pair of ivory and red ikat shorts or a hot-pink sleeveless tie-neck blouse each cost $325, and skirts — like a black-and-white polka dot pleated A-line, a pink pencil style with red and marigold flowers and a black-and-white bouclé — will retail for $450. In addition to the red splashed throughout the floral and ikat, there’s a solid red classic shift with a skinny patent belt that falls below the knee, red high-waisted pants and a red belt. There is a silk faille bohemian trapeze gown in vibrant coral that will retail for $1,295, the most expensive piece.

The Outnet has previously collaborated with the likes of Alexander McQueen, Erdem, Anna Sui and Paul & Joe on various programs, but this is its largest-scale partnership to date, according to Stephanie Phair, the e-tailer’s managing director. Not only will a full marketing strategy for the de la Renta line roll out leading up to and coinciding with the launch, but Olivia Palermo has been named the face of the collection.

“We know that our customer loves Oscar, but we also feel that this is an amazing opportunity to tap into The Outnet’s audience and a new audience that Oscar as a brand might not have reached yet,” Phair said, noting that theoutnet.com receives 1.5 million unique visitors a month from more than 149 countries and its full-priced sister site Net-a-porter carries Oscar de la Renta. “This is tapping into a potential customer that will become an Oscar de la Renta customer.”

And as for tapping Palermo to front the campaign — she will appear in a homepage takeover, as well as product images and a shoppable video — Phair said finding someone who “made sense” was a collaborative effort between The Outnet and de la Renta. Visuals of Palermo will appear in banner ads and the content will be cross-promoted across social mediums like Facebook, Twitter and Pinterest. On Feb. 19, a teaser video will go live on The Outnet and YouTube to give consumers a preview of the line, and users will be encouraged to sign up to receive more information and a chance to win a piece from the collection.

“It’s all about reinterpreting classic styles, so we wanted someone polished who represented the Oscar brand but that also was someone that Oscar doesn’t typically use,” Phair said of Palermo.

De la Renta senior vice president of communications Erika Bearman — also the brand’s social media persona, OscarPRGirl — will promote the line on Twitter, Facebook, Tumblr and Instagram. Bearman will photograph herself in select items from the collection and share on Instagram and encourage fans to do the same.