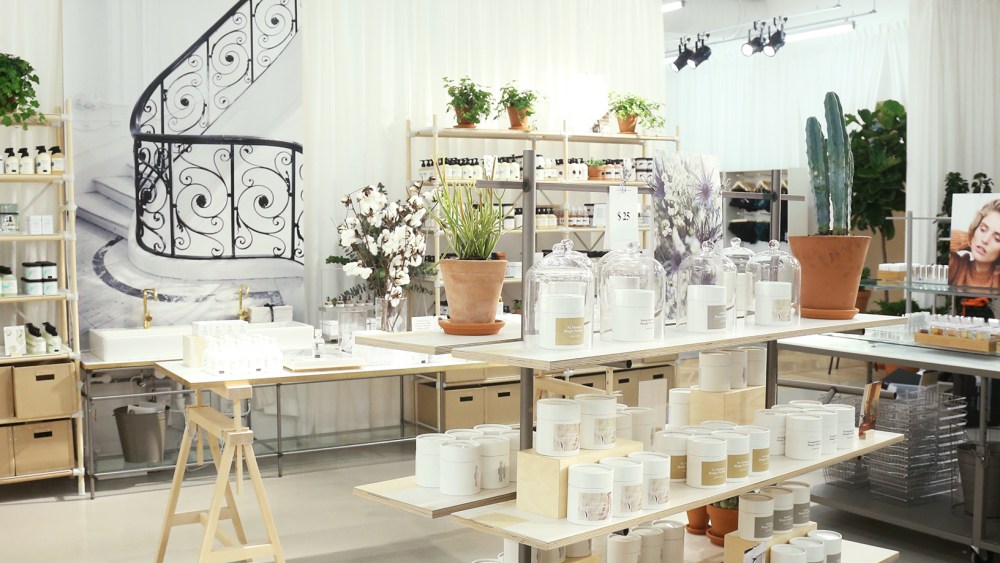 NEW YORK — The H&M subsidiary & Other Stories today unveiled its second U.S. store, a 9,700-square-foot flagship at 505 Fifth Avenue and 42nd Street here, almost a year to the day of the opening of its SoHo unit.

The new flagship, which occupies two levels, is adjacent to a COS store that opened on Oct. 15. COS also is owned by H&M and this month unveiled its second California unit at South Coast Plaza in Costa Mesa and opened a flagship in Boston, with locations at The Beverly Center in Los Angeles and Houston’s River Oaks District on tap.

With 25 stores worldwide, the two-and-a-half-year-old & Other Stories is less developed than COS, which operates 133 stores. A unit for & Other Stories will open at the World Trade Center in Manhattan, where COS and H&M also will have stores, and the retailer will open a flagship in Washington, D.C., next year. “We’re going to the West Coast, to the Los Angeles area,” a spokeswoman said, noting that & Other Stories will open a unit at South Coast Plaza. “We’ve been flirting with that whole vibe. You could think of a lot of cute little areas in L.A. where this [concept] would work so well.” She said more stores in New York could be in the offing.

The retailer maintains a high degree of autonomy from H&M, with its own design ateliers in Stockholm and Paris. “The customer doesn’t necessarily have to know those things,” the spokeswoman said, referring to its relationship to H&M. She said the brand appeals to “a 16-year-old girl to Iris Apfel,” the nonagenarian who appeared in the company’s ad campaign last year.

With about one-third more space than the SoHo location, the Fifth Avenue flagship offers the lingerie collection in a separate room on the second floor. There’s also a shoe, handbag and accessory department behind glass doors and the bath and body range, fragrances and color cosmetics, which bowed over the summer. Ready-to-wear is displayed on rolling racks, with cards above each look, the way clothing would be arranged backstage at a runway show.

Throughout the store, plants, especially cacti and other succulents, can be found on shelves and tables. A large orange tree stands next to the store’s “free library.” “It’s a nice non-commercial project that’s all about sharing,” the spokeswoman said. “We have a connection to books and storytelling with our name. Flowers and plants are at the heart of our brand.” Books, which bear a tag that says, “Bring me back or swap me,” have botanical themes such as “The Drunken Botanist” and “The Book of Palms.”

“Our botanical-loving hearts are beating a little extra over this opening as we have Bryant Park as a neighbor,”said Sara Hildén Bengtsson, creative director. “It gives our plant-infused decor an extra sense of green.”

The fall collection has a bohemian theme and was inspired in part by flowers, Hilden Bengtsson said. A black crepe dress with a paisley pattern is $325; a floral-pattern jacquard dress, $195, and a paisley jacquard sweater, $125. New this season is a suede gold rivet saddlebag, $175, and its cousin, a gold rivet bucket bag, $195. There’s mixed-media tassel and fringed boots, $245; gold reptile leather boots, $195, and a pleat handbag in dark blue and hunter green suede and black leather, $245. A tan alpaca-blend coat is $275; a dark green wool long tailored coat, $325, and a gray quilted coat, $325.

Satoshi Kawamoto, a floral designer from Green Finger, created an installation in the Fifth Avenue and 42nd Street windows, called “The Floating Garden,” which is made up of monumental forms constructed of dried and partially dried flowers, leaves, twigs and branches. The displays, which capture and compliment the deep purple, rust, tan and violet hues of the fall apparel, will continue to dry and change color.

When & Other Stories launched, it offered an in-store recycling program for its beauty packaging. The company is now extending the program to include textiles. Customers can bring textiles from any brand, including old socks and towels, to & Other Stories and receive a 10 percent voucher that can be used in stores and will be valid for three months.

Fresh mint tea made from mint leaves picked off dozens of plants will be offered to shoppers during the weekend for the opening.