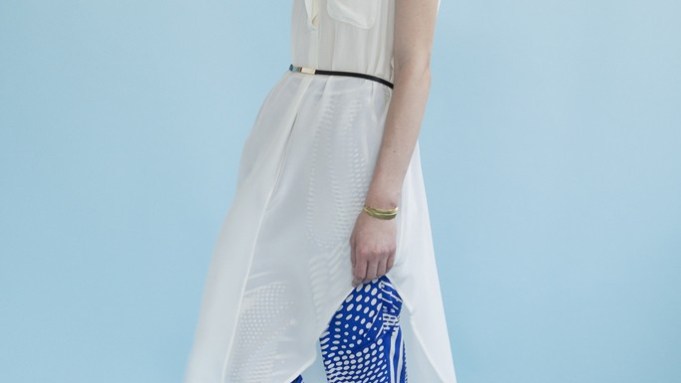 NEW YORK — Otte has a spate of initiatives ahead.

Kay Lee, who founded the brand 15 years ago, will open a new store in NoLIta at the end of the month, which represents store number five in Manhattan. The 650-square-foot “nook,” as Lee calls it, will be devoted to Otte’s in-house label, which she designs. The collection is minimalist and modern, with sleeveless V-neck silk dresses with rounded hems and cotton voile tops with uneven hems. “We decided to grow the Otte brand,” said Lee, noting that the collection is manufactured in the Garment Center.

The recently unveiled #8 New York Showroom — eight is a lucky number in Lee’s native Korea — wholesales the Otte collection along with the lines of eight young designers. Lynn Rosetti, a veteran of Steven Alan, is Lee’s partner and director of the showroom, which also showcases her handbag line, Oliveve. The other brands represented include Poupette, Sunday Somewhere, Alexia scarves, Great by Sandie, Lionette by Noa Sade and Marie Turnor.

A Brooklyn location planned for next year will be something of a homecoming for Kay, who unveiled her first store there in 1999.

E-commerce is growing at a 40 percent to 50 percent clip. Online is a bigger focus for the company, Lee said, noting that 50 percent of the online business comes from international customers, mostly in China, Japan and Southeast Asia.

Stores in Asia are on the horizon. “The concept of a multibrand store is lacking in Asia,” Lee said. “We’ll open stores as soon as we can find the right local partner.

“I’m executing a foundation for this brand,” said Lee, who has put a team in place. In 2011, Lee realized she needed a right hand, so she hired Nancy Zhang, a former marketing manager at Google, as vice president and chief operating officer. “Nancy is executing an entrepreneurial vision,” Lee said. After Zhang joined, Otte in 2012 opened its biggest store, on Third Avenue and 71st Street, which Lee refers to as the flagship.

Lee’s is a rags to riches story. After studying fashion design at Parsons The New School for Design, she worked at J.C. Penney and Forever 21. She decided to open her own store in Brooklyn on Bedford Avenue. With no merchandise or money, she borrowed leftovers from her designer friends such as Jody Arnold. “I still kept my job,” she said. “I worked seven days a week for three years, nonstop.” In 2002, Lee opened a store on Greenwich Avenue in the West Village. A Madison Avenue and 94th Street unit bowed in 2008. When her 10-year lease ended in Brooklyn in 2009, Lee closed the store and opened another one in TriBeCa.