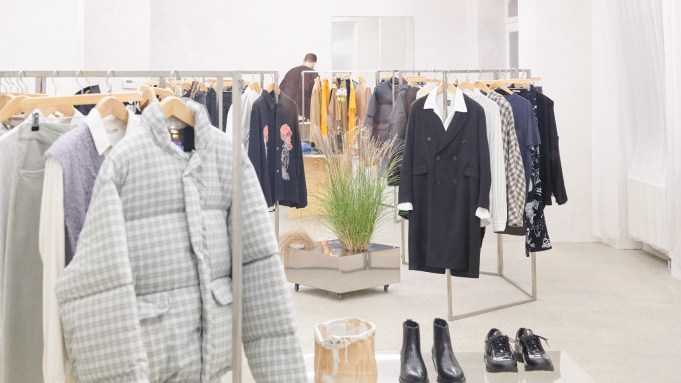 BERLIN — It’s continuing to be a year of expansion for independent Swedish brand Our Legacy.

Now stocked by about 240 multibrand stores worldwide, with a strong online business particularly at home and in the U.S., plus four company-owned stores in Sweden and London, Our Legacy has just opened its first store in Berlin. Located on a gallery and café-studded stretch of Tucholskystrasse in Mitte, and in close proximity to Comme des Garçons around the corner, the 1,000-square-foot store exemplifies the brand’s pared-down aesthetic.

When closed for business, gauze curtains shutter the space for a feeling of mystery, and when open, the plentiful windows are lined with leather window seats for a quiet time-out moment, rather than accommodating fashion-clad mannequins. Stripped of merchandise, the interior looks like a gallery installation comprised of concrete, steel, acrylic glass and pine. Yet the products themselves have a natural, friendly and hands-on appeal.

Generously proportioned in fabrics that can range from homespun wool, handwoven and washed silk, satin, linen/wool, hemp and nylon, the fall 2018 collection, called Circles, dresses down ceremonial wear to be worn with casual worker gear while at the same time dressing up workwear in what the makers call a “lo-fi, hi-end” mix.

The brand got its start in Stockholm in 2005, and in 2007, brought out a full collection of contemporary men’s basics with a quality and product-driven focus. Over time, Our Legacy has adopted a more experimental and progressive approach while retaining signature pieces reworked in a new guise each season. “What we’ve done and managed is to be 100 percent design-driven,” commented co-owner and chief executive officer Richardos Klarén, “but what is also always natural for us is that you have to be able to wear Our Legacy on the street.”

As for women’s wear, Klarén and cofounder and creative director Christopher Nying said it had been in planning and discussion almost from Day One. The question was whether women’s should be a reflection of Our Legacy’s men’s range or completely on its own. The decision for the premiere was to turn the tables around, and this season’s design process actually started with the women’s collection versus the men’s.

“It was a way to be objective, and we felt it was important to allow the women’s DNA to affect the men’s,” Nying said. “And so there’s a dress for guys, and it’s the same dress on women. We kept the fit. There’s also a blouse for guys, but vice-versa a men’s shirt on women. They’re taking from each other.

“We’re distributing both at the same time,” he went on, and while the fabrics might not be exactly identical and there is a separate set of women’s patterns, “the fits are the same,” he emphasized. Accessories are unisex and footwear will also continue to be offered in unisex sizing.

Aptly titled Synthesis, the spring 2019 men’s and women’s collection is a study in “natural tech,” inspired by the materials used in farming and gardening which tend to involve both naturals and synthetics.

Regarding the brand’s further progression, Nying and Klarén hope to keep the growth organic. “We’ve always grown organically, and didn’t build on a business model, but built on people,” Nying remarked. “Maybe I’m conservative, but I hope we can keep the independence we have. The system is incredibly fast and yes, we now do more drops. We have to accept that. But we’re producing less (pieces) than before,” he pointed out.

Our Legacy’s turnover will near 7 million euros this year, and does best, according to Klarén, as an entry level for designers’ brands or as a bridge between casual and designer. “Our online business is really good, our biggest [sales channel] so far. That’s the big discussion in the industry: how do you manage to build online and also open more stores?”

He said the company came to the conclusion that it was necessary to open stores to show the brand’s identity, while acknowledging “you can’t expect as much sales from physical stores anymore, but they drive online and also build brand recognition. Of course, stores have to operate with a plus,” he remarked adding “we definitely want to increase our store network.”

Tokyo and Paris are in the brand’s sights, as well as Copenhagen where the brand has a good following, he said. The West and East Coasts of the U.S. are also in focus. “We definitely have the customer there. Together with Sweden, we do the biggest online business there,” he said, “but we’re still small, so we have no set-up in the states. Everything’s handled from Stockholm at present.”

But we’re not in a hurry,” he stated. “We’re now adding women’s and a few more stores,” such as a neighboring space to the London Soho store, which will house women’s, and another women’s only shop in Stockholm department store NK. “We’re expecting big growth,” he concluded.