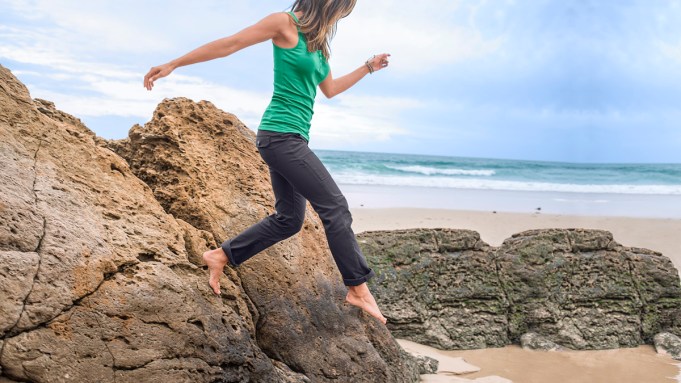 While the Gap is still pushing chinos and khakis, outdoor apparel brands like Kuhl, Mountain Khakis, Prana and REI have found that hiking pants are becoming the new office “khaki.” This has been especially true on the West Coast and the Mountain States, although now it seems the trend is pushing east.

“We’ve been watching this trend coming for a number of years beginning with yoga leggings/black leggings being worn in everyday scenario’s and into the work environment,” said Christian Castellani, senior merchandise manager at Prana. “Our feeling was that if you could make a stylish ‘outdoor’ pant, that we’d see adoption into the work environment given the comfort and versatility of the fabrics that we use.” Prana is a subsidiary of Columbia Sportswear.

The NPD Group found that the sports apparel business remains healthy, while regular fashion is struggling to find customers. Total activewear sales as of March were up 13 percent year-over-year, while fashion apparel fell 2 percent year-over-year. Women’s activewear was up 15 percent as of March, while fashion apparel fell 1 percent.

There seems to be little letup in the momentum. The Outdoor Retailer Summer Market in Salt Lake City, which ended Sunday, saw roughly 29,000 visitors attend and had more than 1,600 brands on display. Of those, 300 were new to the exhibition this year.

Part of the increase can be attributed to the growing popularity of outdoor sports, with hiking-related purchases up 10 percent for the past year as of May and recreational kayaks up 11 percent for the same period. Women’s hiking products jumped 12.4 percent and women’s outerwear bottoms increased 7.5 percent.

NPD also determined that of the top five apparel categories in outdoor, active pants were the only category that wasn’t in decline. They found that in women’s outdoor apparel, Mammut and Lucy are the fastest-growing brands.

“It’s all about comfort and it’s definitely a West Coast thing,” said Gabriella Santaniello, founder of retail consultant A-Line Partners. “It’s looser and from a woman’s standpoint, it doesn’t wrinkle. It’s moisture wicking, it doesn’t have to be dry cleaned and it has a casual, but tailored look.” Gabriela confirmed that the West Coast is beginning to dictate the East Coast casual office style.

“It’s a natural progression. Patagonia, REI and Lululemon all came from the West Coast desire for a more comfortable work uniform,” she said. “It’s the happy medium because jeans are still jeans.”

REI confirmed Santaniello’s view that the business is booming. “Outdoor is a trend in the broader market,” said Michele Orr, general merchandising manager of REI. “When we talk about some of these crossover brands that go from performance to lifestyle, we’re seeing double-digit growth year-to-date.”

“Kuhl has a very outside, mountain look to it. Prana is trending well and so is the REI Sahara brand,” she said.

Orr pointed out that the younger generation wants to go from office to trail to pub and not have to change clothes. “We started in performance, but now we’re seeing the lifestyle component. We’ve noticed a strong bottoms business,” she said.

Kuhl is an emerging brand in the space. It won overall vendor partner of the year from REI in January. While the company has been around for 30 years, it has been selective with where it places its products and refuses to be placed with discounters.

“We see it in our office,” said Melanie Webb, brand manager of Kuhl, which is in the heart of Salt Lake City. The “splash pant” for women is its top seller. “We take a technical, high-performing fabric and put it in a casual silhouette. It has a little bit of stretch and clean lines. They have side pockets so you aren’t sitting on your things.”

Echoing REI, Webb said their customers are most likely headed back out after work to go hiking or biking and like not having to change clothes.

Mountain Khakis was established in 2003 in Jackson Hole, Wyo., as a mountain-inspired lifestyle brand. The brand saw its sales grow 30 percent annually for the five years to 2015. Mountain Khakis is now in over 1,000 stores. It recently hired Jennifer Slack from Patagonia as its senior product developer to expand its men and women’s offerings. Chief executive officer Ross Saldarini echoed the others in the space by saying that his customers want to seamlessly go from trail to pub. He believes there is a big opportunity in creating women’s outdoor clothing that is technical, but attractive.

Mountain Khakis embodies the ethos of creating the new office casual because it has a work uniform program. At the request of businesses that liked the Mountain Khakis brand, the company began providing work uniforms for dude ranches, outfitters, breweries and corporate offices, to name a few. “The ‘rugged yet refined’ look bespeaks a lifestyle that these folks aspire to reflect while at work and at play,” said Mountain Khakis spokesperson Jen Taylor. “Mountain Khakis invented that look and language.”