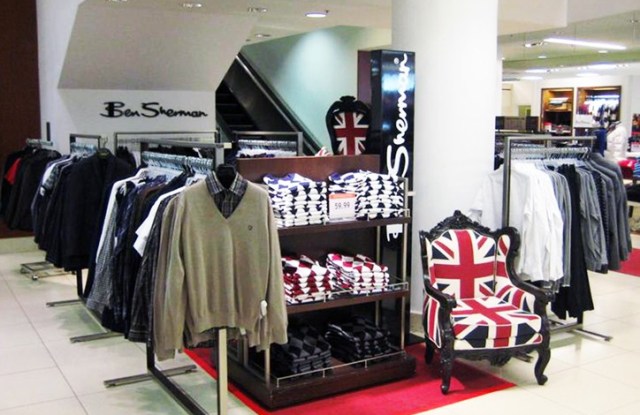 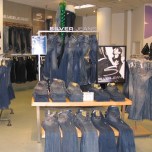 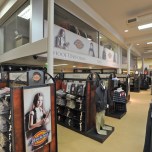 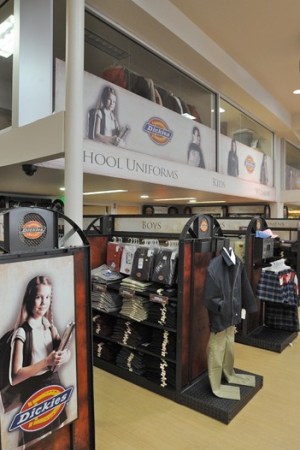 Dickies kicked off an initiative this summer that focuses on in-store experience—one that is largely supported by outsourced merchandisers.

Apparel companies are increasingly looking to third parties to help stock, merchandise and sell goods on the department store floor as they seek new and cost-effective ways to entice shoppers.

Merchandising responsibilities in the past fell to the retailer. More recently, brands themselves shared some of the burden, assembling in-house merchandising teams that fanned out across the country, descending on department stores where they ensured sizes were stocked, presentations were neat and signage was up to standards.

But in lean times, in which retailers have reduced sales staff and vendors are closely scrutinizing operational costs, outsourcing some or all merchandising jobs to retail service companies has come into vogue.

“Not only is there not as much support on the retail floor, but it’s more cost effective to fund that support on a project-by-project basis than to have a team within house,” said Jan Croatt, president of Winston Retail Solutions, which has helped brands such as Emporio Armani, Hugo Boss, Nike and Ralph Lauren merchandise their product in stores. “In every conversation with prospective clients, the economy comes up. As brands look at their costs, some are realizing there is more flexibility and lower costs when you outsource your merchandising programs.”

That dynamic has led to two consecutive boom years for Winston in what has been for most of the fashion business a difficult period. Revenues at the New York-based concern, which also offers branding and retail design services, were up 18 percent in 2008. Croatt said sales jumped 26 percent this year.

Much of that growth was supported by new clients. Within the past two years the company added William Rast, Silver Jeans, Ben Sherman, Williamson Dickie and Timberland to its roster. Other long-term clients, such as The North Face, have expanded their use of the service during the same time.

BDS Marketing, an Irving, Calif.-based retail service company, also has seen its share of apparel clients rise since the economic turmoil began. It declined to name clients, but said more brands in the department store and sporting goods channel have asked BDS to augment their retail presence during key selling times, especially back-to-school and the holiday season.

Another third-party merchandiser, Retail Assistance Corp., agreed that recession-fueled penny-pinching has been good for business. Company receipts jumped 8 percent for this year.

“Some brands have reduced their in-house teams and are looking to us to maintain their stock and visual standards,” said Alan Spalter, president of the company that counts Macy’s — and its private labels — as a client.

Ben Sherman is one brand that now outsources part of its merchandising program. “We reverted to a third-party group so that we could gain more coverage in our stores, get better reporting and feedback and cut costs,” said Joseph Cook, senior vice president of sales and marketing for Ben Sherman USA. The company’s U.S. division originally had six in-house merchandisers, but the cost of maintaining that team — and its significant travel and entertainment budgets — prompted cuts. “But we needed to [make these cuts] without sacrificing quality of the brand experience,” Cook added.

“It makes a huge difference by physically going out there and making sure the environment is user friendly,” Cook said of maintaining the brand’s in-store oversight via outsourcing. “It keeps Ben Sherman more on-brand.”

Merchandising and restocking assistance — whether from a third party or not — does make an impact, said Michael Silver of Silver Jeans, a women’s denim brand sold in 400 doors. The brand had minimal coverage in terms of in-store support until this fall, when it hired Winston for a test. “We put them in 40 doors in some weak areas for us to see if their services would make an impact,” Silver said.

The results were immediate, he reported, as sell-throughs improved, particularly at Macy’s and Dillard’s. Silver Jeans is now expanding its coverage with Winston to 140 by the end of the year. “We’ve tabled the idea of hiring an in-house team,” Silver said. “Once you consider the level of execution and the value for the dollar [you get with outsourcing], you have to reconsider how merchandising is done.”

It’s not surprising that department stores have been at the center of this emerging trend. The channel has been particularly hard hit as middle-class shoppers have traded down. The resulting slump in sales has led to widespread layoffs, including at Macy’s, where 7,000 employees were let go in February. Sixty percent of the pink slips went to staff at stores, distribution centers and the Macy’s Merchandising Group.

According to some vendors, that has made selling and supporting product even more challenging.

“You get one chance to make a first impression,” said Scott Orr, executive vice president of operations for handbag maker Stone Mountain, which hired Retail Assistance Corp. in September to handle its merchandising in a portion of its 1,000-plus accounts in J.C. Penney, Bon-Ton and Boscov’s. “These days, stores have fewer employees and resources, so when boxes get shipped, there is no guarantee they are hitting the floor when they should be. We needed to have a presence there making sure our latest and greatest product is on the shelves.”

But not all agree outsourcing is a quick and cost-effective fix for a brand’s merchandising needs.

“Front-end functions, like product merchandising and store support, are the heart and soul of the business,” said Bob Grayson, principal of The Grayson Co., a retail consulting firm. “I’d be very cautious about outsourcing those roles.”

His concern is one commonly raised by opponents of outsourcing: Third parties can’t execute a brand strategy as well as a dedicated in-house team. Anyone who has booked a flight over the phone recently might agree.

But retail merchandisers counter that their in-field employees match and even surpass the service a brand is able to provide. “Some brands can cover their primary markets well, but often we are asked to cover those secondary and tertiary markets that the brands would never be able to support on their own,” Croatt said. “Also, we have people in local markets who go to the stores all the time. They are experts in their particular regions.”

Some recent outsourcing converts concur. “We would have never been able to build a team with as much merchandising expertise,” Tad Uchtman, senior vice president of merchandising, marketing and licensing for Williamson-Dickie Mfg. Co., said of Winston, which it hired 18 months ago to service 200 doors on an ongoing basis and more doors during key periods.

Dickies had no in-store merchandising support until the workwear company began an initiative focused on its retail shopping experience called “the last 3 feet.”

“Through our research, we know that the in-store experience is how our consumers decide to buy Dickies,” Uchtman explained. “We hired Winston to make that experience more consistent.”

But most brands that recently have retained a third-party merchandiser have split the difference, maintaining a skeleton in-house team that manages key accounts and oversees strategy for the outsourced operations.

“It’s a combination,” said Eric Green, director of global visual direction for The North Face. “There has been a shift from large internal teams to outsourcing. But you want brand ambassadors who understand the objectives of the company and are invested. They are in strategic places in key markets where they add a lot of value. Winston is there to offset the other regions.”

Other brands, especially those atop their respective categories, maintain large in-house teams, including Nautica and Phillips-Van Heusen’s furnishings division, which oversees the biggest dress and neckwear businesses in the department store channel. “A lot of major brands are keeping their salaried teams,” said Spalter.

But in a market where consumers are looking for any reason not to buy — be it an absent price tag, a missing size, a messy rack or otherwise — many brands are focused on putting their best foot forward, even if it means someone else’s feet are walking the selling floor.

“It’s been successful,” said Orr of Stone Mountain’s partnership with outsourcers. “Turn has increased. I’d like to say it was the product and the value. But you never know. Maybe it was just that the bags were straight.”