MILAN — There’s a new Upim in town. The mass-market store chain founded in Verona, Italy, in 1928, unveiled on Wednesday a 16,145 square-foot flagship on Milan’s Via Marghera.

Coinciding with the opening, Stefano Beraldo, chief executive officer of OVS SpA, which controls the Upim chain, outlined the strategy he aims to set in motion for the retailer.

“When we acquired Upim in 2010 it was a dusty business, which didn’t resonate with the market’s evolution and the growing appeal of fast fashion,” said Beraldo referring to a non-competitive price and sales policy.

Following the acquisition, out of the 140 Upim stores, 70 units were turned into OVS banners. While some were then shuttered, Beraldo stressed the group wanted to preserve some key locations, yet reviving and rejuvenating the retailer at the same time.

The first phase of the restructuring process paid off, as Beraldo noted Upim’s earnings before interest, taxes, depreciation and amortization skyrocketed from a 7 million euro loss in 2010 to 25 million euros to the good this year. Meanwhile revenues are expected to post a double-digit increase in 2019, although Beraldo didn’t further elaborate. OVS SpA has been listed on the the Italian Stock Exchange since 2015.

Now in its second phase, the new strategy pivots on three main pillars, including opening additional flagships in key cities such as Turin and Rome. “We are addressing a daily consumer who needs proximity, who’s not eager to spend time at shopping malls and who wants to find excellent value for money products,” Beraldo said, stressing OVS’ network of suppliers and a very compressed value chain guarantees the quality of its products. They include men’s and women’s fashion, kid’s wear under the BluKids label and Croff, dedicated to accessible interior design. The latter two categories are seen as the most significant drivers of growth.

Compared to the OVS retail chain, Upim was described as “a container rather than a brand,” as it offers perfumery and homeware, vertically integrating proprietary brands and other labels.

The retail network counts 450 doors, between directly operated units, franchises and shop-in-shops located inside supermarkets. The latter format was seen as particularly appealing to those food retailers, which will enhance their apparel offering. In particular, OVS struck a deal with the Pam Panorama SpA and Iper retail chains, with already three and six shop-in-shop units, respectively. 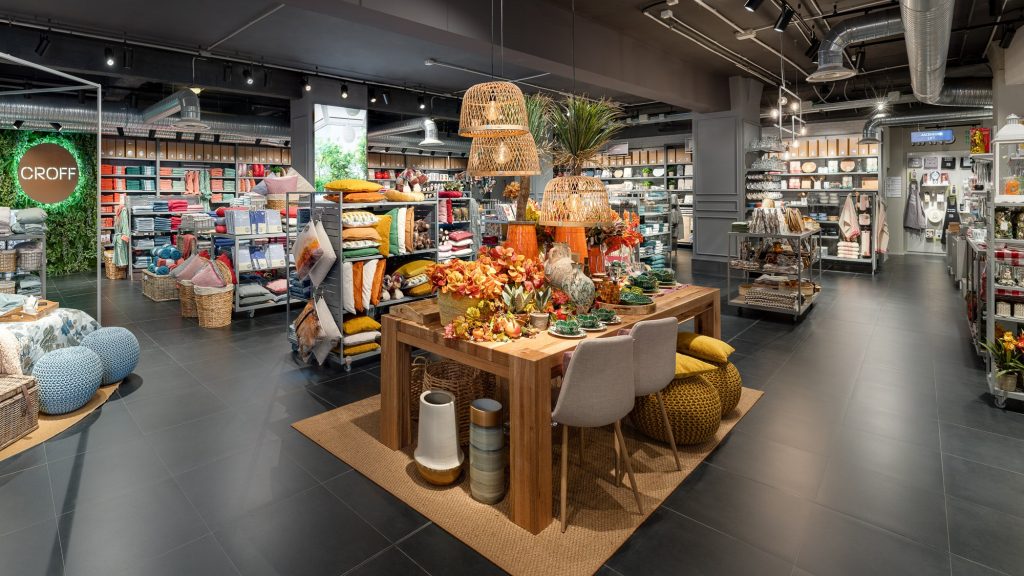 The third pillar for development is seen in the opening of local Upim units in small Italian towns with about 5,000 to 10,000 inhabitants where Beraldo said 20 percent of the country’s purchases are generated. “That’s what we call the ‘Upim of the bell towers,’” he noted.

“There’s a part of the country, which is not into the modern shopping practice, so there’s also a social value in this move,” the executive said noting international retailers don’t usually install outposts in these locations and local entrepreneurs come up with a poor offering, also often poorly priced. To this end, Upim is targeting suburban multibrand stores and haberdasheries to open franchises of 5,380 to 6,460 square feet, catering to less fashion-savvy clients compared with those that shop at OVS.

“Fast fashion is giving way to better thought-out purchases, seeking value-for-money products and quality,” he said noting the retailer is adding premium categories such as linen, silk and cashmere fabrics.

The move resonates with Upim’s strategy to further engage with its customers, which Massimo Iacobelli, the retailer’s general director described as “loyal and recurring.”

Iacobelli said 50 percent of the retailer’s business comes from 30 to 35 percent of consumers that spend their clothing, homeware and perfumery budget at Upim only. “We aim to be the go-to retailer in Italy as we were back in the Sixties and Seventies,” said Iacobelli.

International expansion is also part of the strategy, with the kid’s wear segment and the homeware Croff banner seen as the main growth drivers. Upim already operates 170 BluKids abroad.

Talking about the group, Beraldo said that while OVS SpA’s performances were hit by unseasonable weather in the first half, sales in the third quarter are picking up and on a trajectory to reach the company’s expectations. He added that the group owns 8 percent of its market’s shares in the country.

Asked about the impact of online sales, Beraldo offered that “the disruptive growth of digital sales is slowing down and the sector we operate in, in Italy, has never really reached a peak, as online customers usually surf [the Internet] to find the perfect bargain for labeled products or commodities.”