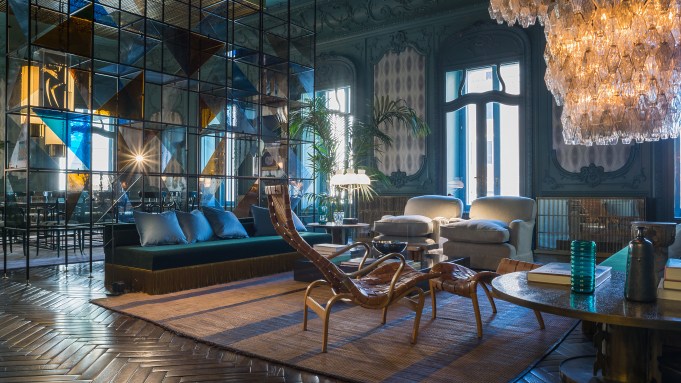 Palazzo Fendi was conceived to be “a must-see in Rome.”

Pietro Beccari, the brand’s president and chief executive officer, speaks enthusiastically of the newly refurbished building in the Italian capital, which will be officially inaugurated with an event on March 10. “It’s expected to leave a long-lasting impression and further raise one’s perception of Fendi,” Beccari told WWD.

Palazzo Fendi will comprise the brand’s biggest flagship in the world, which includes a fur atelier; the company’s first boutique hotel, the Fendi Private Suites, and Palazzo Privé, an apartment designed by Dimore Studio, as well as a Zuma restaurant. “We completely overhauled the interiors of the building, but it only took nine months for the works, with four architects and six companies of builders,” said Beccari, who masterminded the project of moving crammed Fendi employees from the former offices in the location to the new headquarters in the Palazzo della Civiltà Italiana last year.

The company has occupied Palazzo Fendi, which is on Largo Carlo Goldoni, located in front of luxury shopping street zvia Condotti and the Spanish Steps, since 2004 for retail and office purposes. The building was originally a residence of the Boncompagni-Ludovisi family, one of Rome’s oldest, most aristocratic lines that boasts Pope Gregory XIII among its ancestors. The flagship in the five-story, 17th-century building covers almost 10,800 square feet, and is an evolution of Fendi’s Paris and Milan stores by architect Gwenael Nicolas, with a new area dedicated to Fendi’s in-house fur atelier, for special made-to-order pieces, with seven artisans at work.

The hotel concept is by architect Marco Costanzi, who also conceived Fendi’s new headquarters in Rome’s Palazzo della Civiltà Italiana and the company’s Milan showroom. The Palazzo Privé, which covers 1,080 square feet, includes a kitchenette and is a private location for VIPs, celebrities, and “special friends of the house,” said Beccari. It is decorated with artworks by Agostino Bonalumi and Lucio Fontana from the Galleria Mazzoleni.

The hotel has seven rooms, but Beccari is cautious about rolling it out elsewhere. “Let’s see how it goes. This is not about the business, it’s about a lifestyle concept and offering a service to our customers,” he explained. For example, the seven rooms can be booked together for 17,000 euros, or $18,460 at current exchange. Guests have a table reserved at Zuma.

Beccari described Zuma as “the first real international” restaurant in Rome. The Japanese restaurant Zuma, cofounded by Rainer Becker, is on the top floor and roof bar. Zuma at Palazzo Fendi was designed by Noriyoshi Muramatsu of Tokyo-based Studio Glitt, who has worked alongside Becker realizing his vision of Zuma since it first opened in 2002.

A lepanto red marble staircase is a striking fixture at the entrance of the store. Beccari said that 10 different marbles were employed in the building, from marmorino to travertine.

In addition to Fendi Casa furniture, the Palazzo is peppered with standout design pieces: A vertical light, by Dimore Studio, in oxidized brass and black painted iron in the foyer ceiling; a conversation armchair in briarwood, oxidized brass, crocodile leather and velvet fabric in the foyer; wall lamps by Hans-Agne Jakobsson; a GioPonti Daybed from Apta Series; a portoro marble console by Oeuffice in the foyer; a Venini chandelier; an Axel Vervoordt armchair in the living area; Marco Zanuso for Arflex armchairs, and a chinoiserie French cupboard supplied by Dimore Gallery from the year 1800 in the fitting room.

The boutique carries the entire women’s and men’s collections. Men’s wear, noted Beccari, has more than doubled sales in the last two years.

Beccari is especially proud of the fur atelier. “It’s a revolutionary idea — a working atelier in the store. We want to convey the idea that it’s cool to become an artisan, or a tailor. It’s extraordinary to work with people that create ideas. In food, it’s special to be invited to eat in the kitchen and see the chef up close. Likewise, it’s a unique experience to see artisans at work.”

The executive said that, in sync with the growing desire for social responsibility, old fur models can be revamped and refitted. Beccari revealed that Fendi has created a tailoring academy in Casperia, a small village outside Rome, with a historical tailor, Maria Antonietta Massoli, and her family, restructuring the historical Palazzo Locatelli that houses the students and purchasing machines and tools. “We’ve received more than 200 requests from all of Italy, and selected nine [for the first group].” After six months of training and a diploma, Fendi or Massoli provide an internship. “But the students may also decide to intern or work for other companies; they are not bound to us,” observed Beccari.

Although Beccari is mum on the amount, Palazzo Fendi is yet another major investment for the company, after the restoration of the Palazzo della Civiltà, which includes an open exhibition space on the ground floor, and of several historic fountains in Rome, including the Trevi fountain. “It’s all good for the city,” he said simply. “I am proud to say that 33,000 visitors came to see the Palazzo della Civiltà since October. Stay tuned — more projects are in the pipeline.”