In a snapshot of spring data from businesses and consulting firms, consumer behavior is still shifting sustainably amid the pandemic.

For some small companies, spring shoppers seem to be either gearing up for the long haul of time spent indoors (turning to resale for leisure and exercise purchases) or envisioning life on the other side of the pandemic — dreaming of getaways or at least better habits, with the adoption of reusables.

Either way, it’s just a snapshot.

TURNING TO RESALE FOR ENTERTAINMENT BUYS: Japanese resale marketplace Mercari has seen “record numbers of Americans” shopping and selling on its platform since the state of emergency was declared mid-March.

In a report released Monday, some categories fared especially well as social distancing has bolstered an appetite for all things leisure. Mercari — which boasts 3.4 million users in the U.S. — saw exercise equipment sales up 607 percent in April; toys and collectibles, up 574 percent; video games and consoles, up 437 percent.

With spring cleaning under way, in April 2020, the average U.S.-based Mercari seller made $183, which is a 50 percent increase compared to April 2019. March 2020 also saw a notable increase in sales per seller over the prior month. 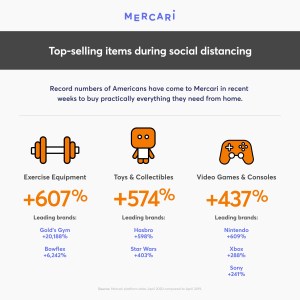 Coinciding with its unisex sleepwear launch, which features a collection of digitally-printed pajamas made with 55-percent recycled PET, the brand also came out with its version of seamless underpinnings called Au Naturals this spring.

The collection is made with the same corn sugar-based EFL fabric that is seen across its swimwear category, with corn-based fabric claiming about half the energy footprint compared to conventional cotton, according to FibretoFashion market intelligence.

And although Sharleen Ernster, We Are Hah’s founder, presumed their leading category — swimwear — would tank, she saw the opposite. “We’ve seen a really strong sleepwear launch, steady lingerie, and in swimwear, a 1,000 percent uptick since March, April and month-to-date May since last year,” said Ernster, despite being a small business with little market share. 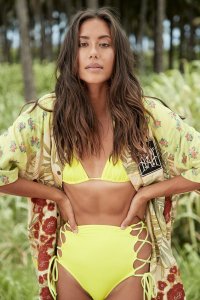 PAPER OR PLASTIC?: With municipal and statewide legislation on plastic bags being lifted in California and postponed until June in New York City during the coronavirus pandemic, an unlikely consumer behavioral shift is noted in recent research: reusables.

The annual study, released every April, tests consumer attitudes to a range of topics such as fast fashion, plastics and how companies market environmental benefits. 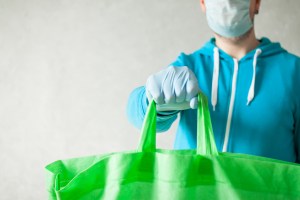