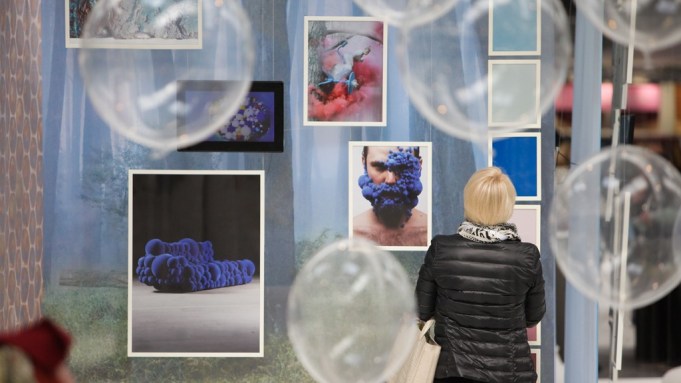 With Turkey looming as a new powerhouse player at both fairs, the organizers are adapting swiftly to a changing retail landscape and fine-tuning their offering to meet growing demand for innovative and sustainable fabrics.

Première Vision, which will run from Feb. 18 to 20 at the Parc d’Expositions in Paris Nord Villepinte, is expanding its creative and geographic footprint, while spotlighting Turkey, a rising star in the textile industry that boasts the third-strongest presence at the fair, after Italy and France.

“They would probably surpass Italy, but we have very strict quality criteria, and some of the applicants are not quite there yet,” said Philippe Pasquet, chief executive officer of Première Vision SA.

Among the Turkish exhibitors making their debut this season are Gallus Tekstil, a historic producer of high-end jerseys, and Mayteks, which boasts a number of special finishing techniques such as silk touch and antimicrobacterial finishing. What Turkey excels at, Pasquet noted, are competitive prices, production capacity and know-how, “following substantial investments in the industry, which is appreciated by large retailers such as Marks & Spencer, for instance.”

With that in mind, Première Vision will launch a new outpost in Istanbul in October. Pasquet said, “The fair will convene twice yearly during off-season to attract larger segments of the clothing industry, especially from Russia and Eastern Europe.”

Pasquet highlighted an uptick of 14 percent between February 2012 and February 2013 in U.S. customers, which is the fair’s fastest-growing group of clients, followed by an 11 percent growth from Italy, and 10 percent gains from both Russia and Japan. He predicts a similar scenario for customers visiting from Russia, which make up 25 percent of Turkey’s export sales. He said,“In the past eight years, we have tripled the number of Russian visitors, a trend that will likely continue.”

A total of 1,771 exhibitors are expected to take part in the different trade shows under the Première Vision Pluriel banner — Expofil, Première Vision, Indigo, Modamont, Le Cuir à Paris and Zoom. This represents an increase of 1.8 percent versus a year ago. At PV, organizers are expecting 740 exhibitors, six more than last February, with 338 coming from Italy, “a country which, despite a difficult economic environment at home, has a strong pulling power,” noted Pasquet.

Meanwhile, the U.K. is flexing its muscle at Indigo, the textile design exhibition. This season, the show will count 198 studios and independent designers, 82 percent of which are British.

Having already amped up its Web site to include regular trend news during the show, PV is further expanding Maison d’Exceptions, an atelier highlighting the craftsmanship of its exhibitors, now in its third edition.

Pasquet said his biggest concern for 2014 was price volatility. He said, “With a weak dollar, a strong euro and uncertain exchange rates, naturally, there is fear, but we are reasonably optimistic. We are now going through the second wave of the economic crisis, which is less violent than 2008 and 2009, but will last longer. It’s cleanup time in Europe, but the global signs are very positive.”

Citing the U.S., PV’s most important market, as its motor, Pasquet added that emerging markets such as Mexico, Colombia and Indonesia were also stepping into the arena of creative fashion, PV’s core business.

At Messe Frankfurt’s Texworld show, which will run from Feb. 17 to 20 in Le Bourget exhibition center, momentum is building with its ongoing focus on sustainability.

“This is not a trend for just one season, it’s a necessity,” said Michael Scherpe, president of Messe Frankfurt France. “We will speak about sustainability for many more years to come.”

Although Scherpe does not expect any radical changes to happen immediately, he said the market has shown a “growing will” for change in this domain.

“This is true for production in general,” he said. “Buyers have become increasingly sensitive to this issue,” referring to countries such as Bangladesh, where poor pay and working conditions continue to generate negative headlines. “They have come to realize that price is important, but price is not all.”

This season’s hot topic is also reflected in the fair’s seminar program. Among the conferences are “Improving Working Conditions in Your Clothing Supply Chain,” organized by Well Made; “Sustainable Fashion, the Key Success Factors and Limits,” led by Ekyog, and “Chemical Regulations and Opportunities for Eco Design: Case Studies in the Textile Supply Chain,” delivered by Ecomundo.

Some 620 exhibitors are confirmed, 10 percent more than a year ago, with Turkey showing “most vigorous growth,” driven by the increasing quality and close proximity to European buyers.

“It is our second-strongest country now after China, followed by India and South Korea,” said Scherpe.

The fair will count 81 new weavers, with knit producers registering the most significant increase, up 20 percent compared with last year. Among the newcomers in the sector is Korea High Tech Textile Research Institute, for instance, which offers high-tech eco-friendly knits.

As for overall conditions, Scherpe said, “Unless there is another major crisis, 2014, 2015 and 2016 are looking very good. There is a lot of optimism in the industry. The situation has much improved compared to two years ago.”

“Most impressive,” he said, was the evolution of the Apparel Sourcing show, dedicated to finished-product manufacturing. Its number of exhibitors, now standing at 110, is expected to double this season compared with last year.

“This is an interesting result. It shows the market has always been there, but a platform was missing,” Scherpe added. “There are not so many shows in Europe for garment sourcing, while a lot of companies think about outsourcing their production. With the Apparel Sourcing show, Paris is gaining an important place in the industry.”