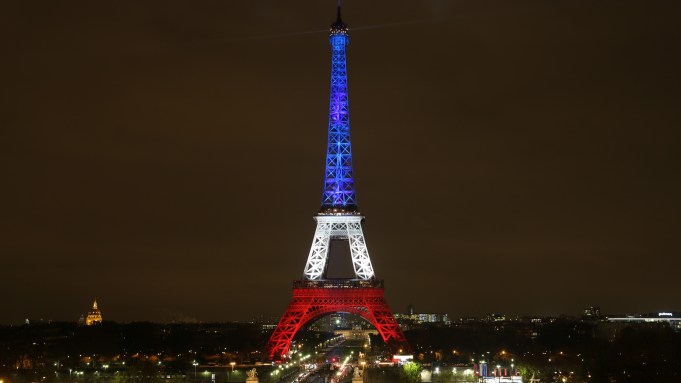 PARIS — Parisians resumed their daily routines on Monday, albeit nervously, falling quiet for one minute at noon to commemorate the victims of Friday’s wave of terror in the French capital.

Stores, most of them shuttered since Saturday amid security concerns, resumed trading. Museums and cultural institutions reopened at 1 p.m. CET after the Ministry of Culture had ordered them shut over the weekend.

French President François Hollande was at the Sorbonne Monday morning to pay homage to the 129 people who were gunned down at cafés and a concert. Later in the day, he gave a rare address to a joint session of Parliament in the Palais of Versailles during which he said “France is at war” and emphasized the necessity to destroy ISIS.

“France is not engaged in a war of civilizations because those assassins don’t represent any [civilization],” said Hollande. “The sponsors of the attack in Paris must know that their crimes, far from making France’s resolution waver, further reinforce our determination to destroy them.”

During a 37-minute address, Hollande proposed amending a law in the constitution to extend the country’s state of emergency for three months. (Currently, it can only last 12 days after which a vote is needed for a prolongation.) The idea, said Hollande, is to adapt the law’s content to the evolution of technologies and menaces. Parliament is to vote on the updated legislation, which dates from April 3, 1955, at the end of this week.

The president also said he would create 10,000 new jobs within five years to help beef up security. This includes 5,000 new jobs in France’s police force and gendarmerie in two years. There will also be 2,500 new posts in the country’s justice system and 1,000 in its customs department.

Hollande plans to meet with U.S. President Barack Obama and Vladimir Putin, president of Russia, in the next few days to forge a coalition against the Islamic State in Syria.

“We must continue to work, go out, live and influence the world,” he continued. “They will never prevent us from continuing to live fully, freely.”

Earlier in the day, France’s Prime Minister Manuel Valls gave an interview to French radio station RTL in which he said that terrorism could strike again in the days to come, in the weeks to come.

“We live, and we will live for a long time with this terrorist menace and – without a doubt – we must prepare for reprisals,” he said.

On Sunday night in France, there were 23 arrests and 31 arms seized, of which four were weapons of war, according to a Tweet from France’s Minister of the Interior Bernard Cazeneuve.

Cazeneuve also specified that 168 searches took place and 104 people were put under house arrest. A Kalashnikov rifle, bulletproof vests, police armbands and three automatic pistols were taken from a suspect in the Rhone region.

France remains under a state of emergency and the army has sent 1,000 additional troops to patrol the city in the coming days, as reported.

Amid a tense and morose atmosphere, a plethora of fashion-related events fell by the wayside. Victoria Beckham postponed a personal appearance at Galeries Lafayette scheduled for Wednesday. Gap, La Prairie and Calvin Klein canceled press days; Loewe, a cocktail party planned for Monday night in tandem with Candy magazine; Maison Francis Kurkdjian, a Wednesday event for its Marais boutique; Isetan, its Nov. 24 event at the Plaza Athénée to announce a Paris boutique project; and Tag Heuer, a Nov. 30 party to celebrate its new smartwatch.

For security reasons, the lighting of Christmas decorations on tony Avenue Montaigne, scheduled for Friday evening, has been canceled. Jean Paul Gaultier was originally to push the button in front of the Théâtre des Champs-Élysées.

The lighting of Christmas decorations on Rue du Faubourg Saint-Honoré, scheduled for Tuesday evening, has been canceled too. Baccarat was to light up the ritzy street with 12 chandeliers from the Avenue Matignon to the Rue Cambon. The crystal maker had already set up the chandeliers, but they are to remain off for the time being.

The Eiffel tower was lit in the colors of the French flags – blue, white and red – starting at 7 p.m. and through to Wednesday night. The iconic attraction resumed welcoming visitors at 3 p.m. on Monday.

The city’s main department stores, including Galeries Lafayette, Printemps and Le Bon Marché reopened on Monday. “The general mood is not good, as you can imagine,” said a spokeswoman for the Galeries Lafayette Group, which also runs BHV Marais, though she noted that no major changes in traffic and day-to-day business could be observed.

At both Galeries Lafayette and Printemps, mostly Asian tourists were queuing in front of luxury shops-in-shop, with Chanel, Christian Louboutin and Saint Laurent boasting the longest lines, while others were snapping pictures of Christmas decorations and animated shop windows.

Security was tight. Private security forces had closed off some of the main exits to get a tighter grip on the foot traffic. Customers were asked to open their bags and in some instances to also unbutton their coats.

“Yes, we are increasing security significantly, but we are not implementing these measures in reaction to the attacks. Security is our top priority and our top concern every single day of the year. It was already very strong,” the Galeries Lafayette spokeswoman added.

A spokeswoman for Le Bon Marché also confirmed that “drastic security measures” have been installed at the group’s store network, including Le Bon Marché, La Grande Epicerie and Franck et Fils, starting Saturday morning, though she would not reveal any details. “How long these measures will stay in place does not depend on us, but on the current events,” she added.

Galeries Lafayette said its would stay in place “at least” until Christmas.

The tragedy is bound to cast a pall over the holiday season, and crimp tourism and spending at “what was already a difficult market for luxury goods,” said Luca Solca, managing director, global luxury goods at Exane BNP Paribas. “Anything that disrupts travel is very bad indeed for the sector, as luxury depends 40 percent on people traveling.”

Paris is the second most important city in the world for personal luxury sales after New York, according to Solca, citing data from Altagamma and Bain.

“Tourist inflows to Europe were already seen sharply down in December,” denting European domestic consumer confidence in Q4 and adding to the headwinds Europe’s luxury and retail firms are facing as they head into 2016, he added.