The scene in Paris as retail reopens.

PARIS — The first, post-coronavirus shopping day in the French capital got off to a bumpy start on Monday, but by mid-afternoon a number of streets — and some stores, too — were buzzing with activity.

Tension had run high in the days leading up to France’s first opening day on Monday. People would be allowed to move around freely, without the obligatory permission form, and most stores were allowed to resume business. But shopping centers, along with restaurants and cafés, were left off the initial list of new openings —to be revisited in three weeks’ time. 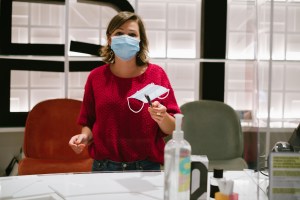 There was hope that the famed Boulevard Haussmann department stores Printemps and Galeries Lafayette would be given the green light, too, but at the last minute local authorities voted no, dashing the expectations of executives and store employees who had scrambled to outfit their stores, erecting plexiglass in front of checkout stands, setting up hand sanitizer stations, and taping distancing guides on the floors.

“Everything was ready so it was a big disappointment,” noted Guillaume Houzé, image and communications director at Galeries Lafayette.

For shoppers hankering after a department store experience, however, there was still Le Bon Marché, Galeries Lafayette on the Champs Elysées and BHV Marais, which took to social media over the weekend to inform shoppers they would be opening at 11 a.m. on Monday. 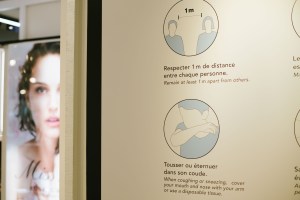 To add to the hand wringing from retail executives, a storm blew into Paris the night before, temperatures shot down 30 degrees, and a blustery wind kicked up.

None of that stopped Youcef Achemaoui, who rolled in on a train from the suburbs and was on the second floor of Galeries Lafayette on the Champs Elysées before noon.

“I came looking for watches — Rolex — that was my motivation for getting out today,” said Achemaoui, wearing a bright blue puffer coat, jeans and, in compliance with the store rules — posted at the bright, light tunnel entrance — a face mask.

“I also thought maybe there would be some sales — I’m a sneaker fan, and I’ve bought them here before,” he said, pointing to the upper floors of the store, which had floral displays spilling off of the railings.

“I’ve been putting my money aside for two months — I’d like to spend some of it,” he added.

Maria Ivanova, who had sewn a mask with a Chanel logo — snagged from a shoe bag — was playing catchup.  “I’m shopping for my mom — it was Mother’s Day yesterday,” she said, noting she lives in the neighborhood.

It was a family outing for Vira Tsepkova — she and her husband were looking for something to buy for their stir crazy toddler.

“We ordered on the Internet, but deliveries are two to three weeks late, so we’re going to buy something for her today. It was time — two months of being shut up at home was too much,” she said, as her toddler dashed out of reach. It might have been her first shopping trip in weeks, but it was also maybe her last for another spell, she laughed, touching her pregnant belly. “This may be my last outing before the next confinement,” she said, noting the due date was imminent.

Two sales clerks crossed paths in front of a conveyor belt featuring a Balenciaga handbag and a pair of chunky soled sandals — all white, embellished with crystals, and bumped elbows. 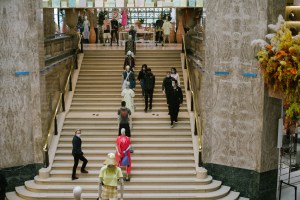 Houzé pointed out the new, plexiglass coverings — “It looks good, doesn’t it?” he said before darting upstairs to inspect the upper floors.

The stakes are high for retailers across France and its capital city, which experienced a good deal of disruption in recent years. In 2015, terrorist attacks brought tourism in Paris to a standstill. The yellow vest protests, which began in 2018, turned sections of the city, including the Champs-Élysées, into battle zones and last year’s pension reform strikes disrupted business during the crucial holiday season.

With international tourism at a standstill, retailers will have to rely on local consumers.

A recent Opinionway poll for Fastmag showed that 45 percent of French people expect to reduce their spending on apparel after lockdown measures ease up, with most citing financial considerations as the reason. The Institut Français de la Mode, meanwhile, recently noted French apparel sales fell 53 percent in March compared to the previous year.

The COVID-19 crisis has brought tourism to a halt, and is expected to push luxury sales down sharply this year, as much as 20 to 30 percent, according to some estimates.

In contrast with the Champs-Élysées, shops along the tony Avenue Montaigne were mostly empty on Monday, while clerks hovered near the doors waiting for signs of life. The normally bustling L’Avenue café remains still shuttered until at least June, as well as the five-star hotel Plaza Athénée.

Christine Stahl, a communications executive, moved down the street on her way to the office — she had no plans to shop but was pleased to cross the River Seine from the Left Bank for the first time in two months.

“I’m happy life is returning — it gives me great energy,” she said. 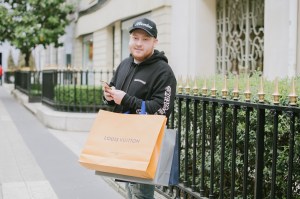 Alex Politi, toting Dior and Louis Vuitton bags, meanwhile, said he was “seriously happy” to return to the store.

On the Rue Saint Honoré, which has seen steep investments from the likes of Chanel, Louis Vuitton and Saint Laurent in recent years, activity remained subdued, with popular fashion crowd haunts, including Bread & Roses and Honor Café, still shut.

Kara Anissa and Zergouin Souad exited the Hermès flagship with a new pair of high-heeled sandals for the summer, just as the weather in Paris began to clear up, turning to sunshine by the afternoon.

“It’s nice to have a change of scenery,” said Anissa, of her shopping outing. 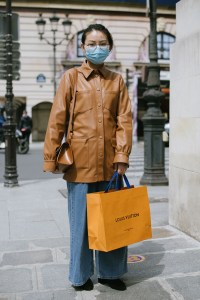 Xuelian Wang, who had been holed up by herself in an apartment, went to the Louis Vuitton flagship on Place Vendôme in hopes of snagging a handbag she had been eyeing on the Internet — where it was no longer available.

“I came the first day to see if it was in stock,” she said. It was and she bought it — a new belt, too — before heading to Zara, where she expected to stand in line before entering.

In the Marais, the streets were bustling. BHV Marais director Amandine Souza said she expected to remember the day.

“This day will stick in our minds — the emotion of opening our store after two months of closure,” she said. 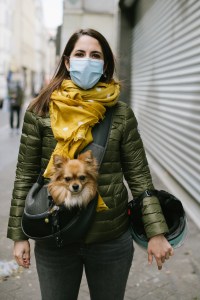 Fanny Beaumont and a friend drove into the neighborhood from the 15th arrondissement on a scooter to BHV’s pet supply store, “La Niche,” but didn’t plan to head into the department store itself — which had a fair amount of shoppers on all floors, filing up and down the escalators, mostly respecting the rules of three-stairs’ distance.

“Today it’s for the dog, because we are running out of crunchy dog food and this is his favorite store — the food is organic,” said Beaumont.

The Left Bank near Le Bon Marché was also busy, with shoppers filing into the store as well as the Grande Epicerie — with a steady stream of taxis shuttling people in. 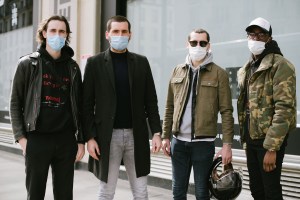 Garret Ramplou, Jérémie Myola and brothers Raphael Morand and Jules Morand came in from the southern suburb Alfortville and said they were after some revenge buying.

“We’ve got to spend money — we’ve been saving it,” said Myola. One of the Morand brothers noted things were starting to feel a bit normal, if subdued.

“It’s important to keep up the social distancing,” he said. 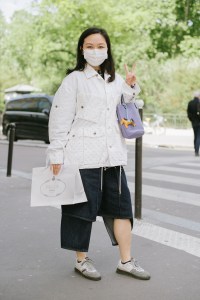 Yan Yan, sporting a pair of Aalto jeans, exited Le Bon Marché with a Prada bag, looking cheerful. “I cooked a lot, relaxed well and spoke with friends and family,” said the executive with a Chinese consulting firm, who lives full-time in Paris.

“I disinfected my hands 3,000 times, I try not to touch things,” said Melanie Aussanaire, who popped out of the store with a Sézane shopping bag that contained shorts, a top and a belt. 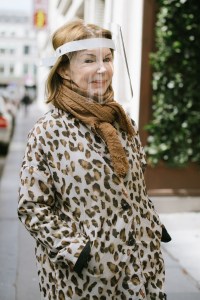 Patricia Kouliche was headed to the drugstore because, as she noted sheepishly, she had recently lost her bank card.

“It’s not that I’m not motivated,” she said, ticking off her usual shopping list for spring.

“New shoes, dresses, sometimes a handbag — yes! We’re in the mood,” she said, sporting a clear, plastic face-covering visor that she had bought through Instagram.