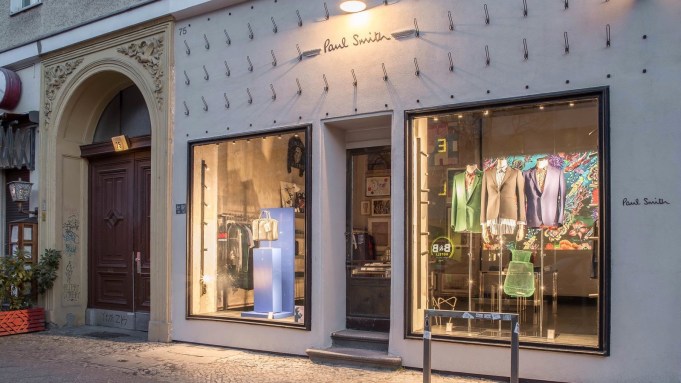 BERLIN — Paul Smith is clearly hooked on Berlin, or so the facade of his first store in the German capital would suggest. Forty-five black metal coat hooks join his well-known signature above the shop’s front windows, which also boasted a precariously hanging trumpet at the opening here Tuesday night.

In Smith’s typically offbeat manner, the Berlin store is not located on one of the city’s main retail drags, but rather on Potsdamer Strasse, a developing haven for art and design galleries and some adventurous fashion retailers, most notably concept store pioneer Andreas Murkudis, who kick-started the neighborhood a few years back. Smith joins Acne, hatmaker Fiona Bennett, Odeeh, Viu and a growing number of hip eateries on the street, but also a hodgepodge of assorted enterprises, including one of Berlin’s last remaining Woolworth’s.

Nonetheless, finding an empty space wasn’t easy. “I’d been looking on this street a long time, and then someone told me Ave Maria was moving around the corner.”

The funny old shop selling religious artifacts now houses the designer’s men’s and women’s ready-to-wear, shoes and accessories, as well as playful objects and curiosities such as the current terrariums filled with miniature model railway figures. As in his other stores, the walls of the Berlin store are adorned with a pastiche of art, photographs and posters from the designer’s personal collection.

The building in Berlin dates back to the 1800s, and Smith retained as much of the old store features as possible, from the floor boards to the doors. “I wanted to integrate, not alienate,” he noted. He also wanted to keep the painted landscape that wound up one wall, as well as the clouds on the ceiling, but “the night before she was to hand over the keys, the former owner dreamed she had to paint them over, which she did the next morning. So I basically kept that,” Smith said of the shop’s now patchy walls and ceiling.

This is the designer’s second outpost in Germany, following Hamburg’s two-floor, 5,000-square-foot emporium in a Biedermeier-style house with garden, which opened in 2014. “It’s gorgeous and quite big,” he said of Hamburg, as well as similarly sprawling Paul Smith stores in London’s Mayfair or Los Angeles. “But right now my mood, with all the nonsense going on in the world and the enormous switch to e-commerce, is for something more intimate.”

The Berlin store has 1,000 square feet at its disposal, similar to the Paris Marais door, or the shop at London Bridge. “In my head, I think of these as neighborhood shops. We’ve all observed the sheer volume of big companies and the facelessness of retail, with every major street in every major city filled with the same designers. It’s so sad,” he declared.

“Shops are about conversation,” he added. “This is almost like a family shop, the kind of shops I first started selling to. It’s a small shop I’m delighted with — my modern statement.”

Smith is reportedly closing in on a store location in Munich, but would not say more at this stage.

As reported, the recently restructured company, with Smith back at the creative helm, has numerous retail openings in the planning. A new London store at Coal Drops Yard is to open in October, and other new stores are slated for Korea and South Africa. In addition, the brand’s 70 shops in Japan will also be refurbished.