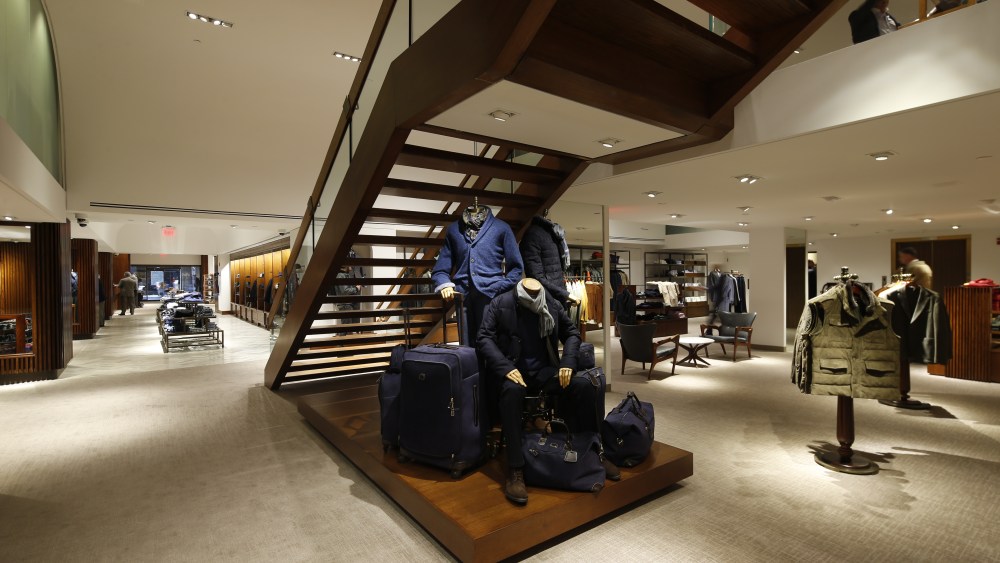 NEW YORK — Paul Stuart has been given a facelift, but the 79-year-old retailer is still completely recognizable.

That’s all part of the juggling act spearheaded by Paulette Garafalo.

Fifteen months after the men’s wear veteran was brought on board as chief executive officer, the store is taking the wraps off a refresh and modernization strategy that touches all parts of the business. From a remodeling of its 60,000-square-foot flagship store here to updates to its silhouettes, Paul Stuart is preparing for its next chapter.

But Garafalo and her team have been respectful of the store’s history and its loyal customer base, so they used kid gloves when instituting the updates.

“We wanted to brighten everything but not lose the store’s character,” Garafalo said. “Our longtime customers were concerned that it wouldn’t be their Paul Stuart anymore.”

They need not worry.

Upon entering, the first thing the customer notices is that the lighting has been enhanced, vignettes have been installed for new product additions, and modern furniture and fixtures have been added.

But the antique tapestry still hangs on the same wall to the right of the front entrance and the 200-plus artifacts that the founding family collected and displayed over the years are still scattered throughout the store. The wood accents that give warmth and character to the building have also been retained.

The renovation of the flagship, which started in May and wrapped up on Oct. 10, was overseen by Bob Green, Paul Stuart’s chief merchandising officer, with help from consultant Margaret Spaniolo, the former head of men’s wear for Bergdorf Goodman.

“Bob had the vision and the inspiration for the renovation even before I got here,” Garafalo said. “And then Ralph filled the store with beautiful product.”

When Garafalo came on board, she named Ralph Auriemma, a 14-year veteran of the company, to the new role of creative director, overseeing all categories of business.

Garafalo, who succeeded Michael Ostrove, the third generation of the family that founded the business, said in the past year or so, sales have risen double-digit every month. “But to be fair, we don’t have a giant business and we’re starting from a lower base,” she said.

“We’ve made a lot of simple changes and additions. But we have much less real estate, and we’re able to be much more flexible because we’re smaller.” In addition to its New York flagship, Paul Stuart has two stores in Chicago and one in Washington, D.C.

“And we’re fortunate to be owned by a very strong, patient and supportive corporation,” she added.

Mitsui & Co., Paul Stuart’s longtime Japanese licensee, purchased the business from the founding family at the end of 2012. Mitsui’s relationship with Paul Stuart dates to 1975 when it began to import the retailer’s private-label merchandise into Japan and today there are more than 100 in-store Paul Stuart shops in Japan, as well as two flagships in Aoyama and Ginza in Tokyo.

The company doesn’t provide volume figures for Paul Stuart in the U.S. or internationally, but when Mitsui bought the company in 2012, Paul Stuart Japan had sales of $133 million and plans called for growing that number to $231 million by 2015.

Garafalo said the biggest opportunities for Paul Stuart are to grow its “underdeveloped” women’s business as well as its fledgling e-commerce operation. Digital had attracted only 2 percent of the company’s marketing spend in the past, she said, but now it accounts for 45 percent. “We’re doing more CRM and digital advertising and we find that it’s driving people into the store,” she said.

In addition, Garafalo said Paul Stuart “just shipped our first wholesale product,” men’s big and tall to DXL stores. And the company’s first outlet recently opened in Clarksburg, Md. “The strategy is not for it to be a profit center,” she said, “but to keep the flagship stores up to date. We had no exit strategy [for leftover merchandise].”

She said that while the results have been encouraging, it hasn’t been without a lot of hard work. “It’s not easy,” the ceo said, “but we’re working very hard to get these results.”

Over the past six months, the renovation has been a major area of focus.

One change is that the former Phineas Cole shop in the front of the main floor has been replaced by a new concept: Made on Madison, where robes, scarves and pajamas that are created by tailors on the third floor of the store are displayed.

“We’ve been doing this forever, but nobody knew it,” Green said.

“Everybody says there’s no robe business anymore,” Garafalo added, “but we sell them every day. It’s become a very good business for us and it continues all year, it’s not just a Christmas gift.”

The furnishings department remains in the front of the store but a new easy-care dress shirt, the Traveler, has been added to the mix. Pocket squares and bow ties, which remain a strong category for Paul Stuart, have been expanded and enhanced with new cases.

Aesthetically, a new seating area has been installed in the front of the store with Fifties-era Midcentury Modern chairs and tables. All told, throughout the store, four seating areas have been added, Green said.

The red brick tile that had signified the entry into the sportswear area on the main floor has been removed in favor of a limestone floor. And the area is now seen as the company’s “lifestyle room,” Green said. Before, it was very classification-driven, but under Auriemma’s direction, the fall collection has three distinct concepts: Estate Tweeds, St. Moritz and Merchant Marine. Each has a distinct, yet complementary signature with its own color palette and expression.

But in all the merchandise, the construction has been lightened up with an emphasis on softness and a more-modern silhouette. Interlinings have been removed in sport coats and coats, trousers are slimmer, patterns are small and sophisticated.

The sportswear offering continues in the large room under the stairs and offers updated pieces such as a waxed silk motorcycle jacket, unconstructed Shetland sweaters, technical joggers, a wool and cashmere laser-cut jersey jacket and a linen sport shirt that looks and feels like brushed flannel.

In the rear of this room is another addition: the Fleischman’s Men’s Salon. This is the third location for the haircutting business in New York.

Next is the Phineas Cole sportswear shop. This is the company’s younger-skewed collection. “It has the same sensibility but a more-modern approach,” Auriemma said, pointing to the washed suede cargos, hooded sport jacket and cardigan-style peacoats.

Perhaps the most striking change is at the rear of the store where Paul Stuart has created a bright and contemporary women’s department. Formerly, women’s, which represents a small part of the company’s sales, was tucked into a cramped space on the mezzanine.

“This is brand new,” Green said. The design is similar to that in the men’s department, but with a lighter, more feminine feel. The merchandise offering is also defined by the same three seasonal concepts, color palette and soft dressing aesthetic.

“We’ve had the biggest positive reaction to this,” Green said.

The former women’s space on the mezzanine is now home to a new men’s shoe boutique. “This is a big departure for us,” he said.

In addition to the dress shoes that have defined the mix in the past, Auriemma has added more sport styles. And the recent addition of former Ferragamo designer Javier Suarez as a consultant and creative director of footwear and men’s accessories is expected to enhance the assortment in the future.

The made-to-measure department remains in its home on the mezzanine as well, but its profile is being boosted by a push for more shirts to augment the clothing.

“We’re looking forward to building a nice shirt business,” Garafalo said, noting that the entire sales staff is now able to sell made-to-measure shirts, not just those who work in the furnishings department.

She said made-to-measure sales have risen 40 percent in the last six months and is one of the fastest-growing businesses in the store. Women’s and e-commerce have both doubled in size in that time frame.

The second floor, home to the company’s large and profitable clothing business, has not been renovated — intentionally. The category accounts for more than 50 percent of overall sales and business has been so strong of late that it didn’t make economic sense to disrupt that with a remodeling effort, the team said.

“Last month, sales were up 18 percent and the month before, 16 percent,” Garafalo said. “A change of carpeting is not going to change anything,” she said.

But the mix has been updated with the classic silhouettes and styles augmented by more soft clothing and coats.

The Phineas Cole clothing shop remains in the rear of the floor.

Garafalo said that the second floor may get a renovation next year, but that hasn’t been decided.