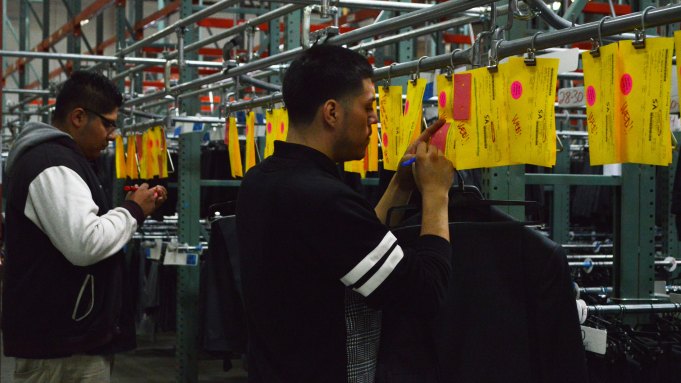 It’s an intricate dance that a suit in the flat-pack Black Tux box goes through before getting to a groom’s door.

The e-tailer that’s made a name for itself renting suits and tuxedos this year raised $25 million in a round led by Stripes Group. That followed a $10 million Series A the previous year. Armed with that new capital, the firm quadrupled its warehouse footprint as it shuttles in a new era of growth.

“Right now, it’s all about logistics and expanding our footprint to offer great customer service,” said cofounder Andrew Blackmon. “So, truly, our whole focus is on this place.”

The Santa Monica, Calif.-based company leased 50,000 square feet of space in Gardena, Calif., relocating within the city from a 12,000-square-foot warehouse. In about a month, the on-site dry-cleaning facility will be up and running. A second floor, which would double capacity, will be added over the winter. Suits and tuxes on hangers begin their journey through the warehouse at the back of the facility. They slide their way through the building on an overhanging pole system that shaves time off the packing process as shirts, shoes and accessories are added to the order and then packed for shipment.

Being close to headquarters and Los Angeles International Airport was crucial for the company, which regularly receives last-minute requests from frantic grooms or groomsmen.

FedEx picks up orders daily at around 5:30 p.m. But there’s always the stragglers for which the company does its own runs to LAX, which has the latest drop-off times in Los Angeles at 6:45 p.m.

“Customers will just call us late in the day and will need something the next day so we have a van that we run to LAX almost every night,” said vice president of operations Mike Gammarino.

The company is considering a separate distribution center in New York and is shopping for new headquarters space in Santa Monica.

Black Tux, founded in 2013, employs about 75 people, including warehouse workers.

Gammarino came on board roughly two-and-a-half years ago from Beachmint, where he ran e-commerce. Black Tux gained even more warehouse savvy when it brought on Mike Klepfer, a former senior operations manager at Amazon, to oversee the warehouse.

While logistics is top-of-mind in the short-term, Black Tux has larger plans for the consumer-facing side of the business next year. Expect more partnerships, Blackmon said. The company also intends to add showrooms. It has one at its headquarters and tested a pop-up in Manhattan’s SoHo last year.

“Both did extremely well, so next year we are going to expand that and add a couple of additional locations,” Blackmon said. “We’re still figuring out right now where they will be, but I think it’s important for an online brand to have some off-line experience, especially in this market.”

Establishing an off-line presence is arguably more important for a company like Black Tux that’s selling premium product, he added. About 95 percent of the people who come into the showroom to try on a tux end up renting from the company.

“People always like to walk into a store,” Gammarino said. “E-commerce is less than 5 percent of total retail sales, so there’s just a lot of people that like to go shopping and go to stores and it becomes an extension of the brand.”