The member lounge at the Peloton New York Studio space.

NEW YORK — Peloton, the leader in at-home and interactive fitness programs, is opening its most ambitious in-person studio at Manhattan West, across from the Hudson Yards complex, next week.

In a pre-opening tour of the space on Thursday, John Foley, chief executive officer and cofounder, said the location cost $50 million to construct, five times the price the company paid to open its original studio on 23rd Street in New York in 2014. When the Manhattan West location opens, Peloton will close its other two locations in New York City on 23rd Street and on Christopher Street.

“In 2013, I choked down a lease of a Duane Reade on 23rd Street and converted it to our original cycling studio,” Foley said. He said this was “before we had any money” and was still out in the market trying to raise funds. “We built it for $2 million,” he said. “This cost $50 million but I think it’s 25 times nicer.”

The space has dedicated cycling, running and yoga studios as well as a “swing studio” where Foley said additional programs can be hosted “if we get into another category. This will be a testbed for new innovative concepts.” The company has now branched out into strength training, meditation, sleep and other categories. 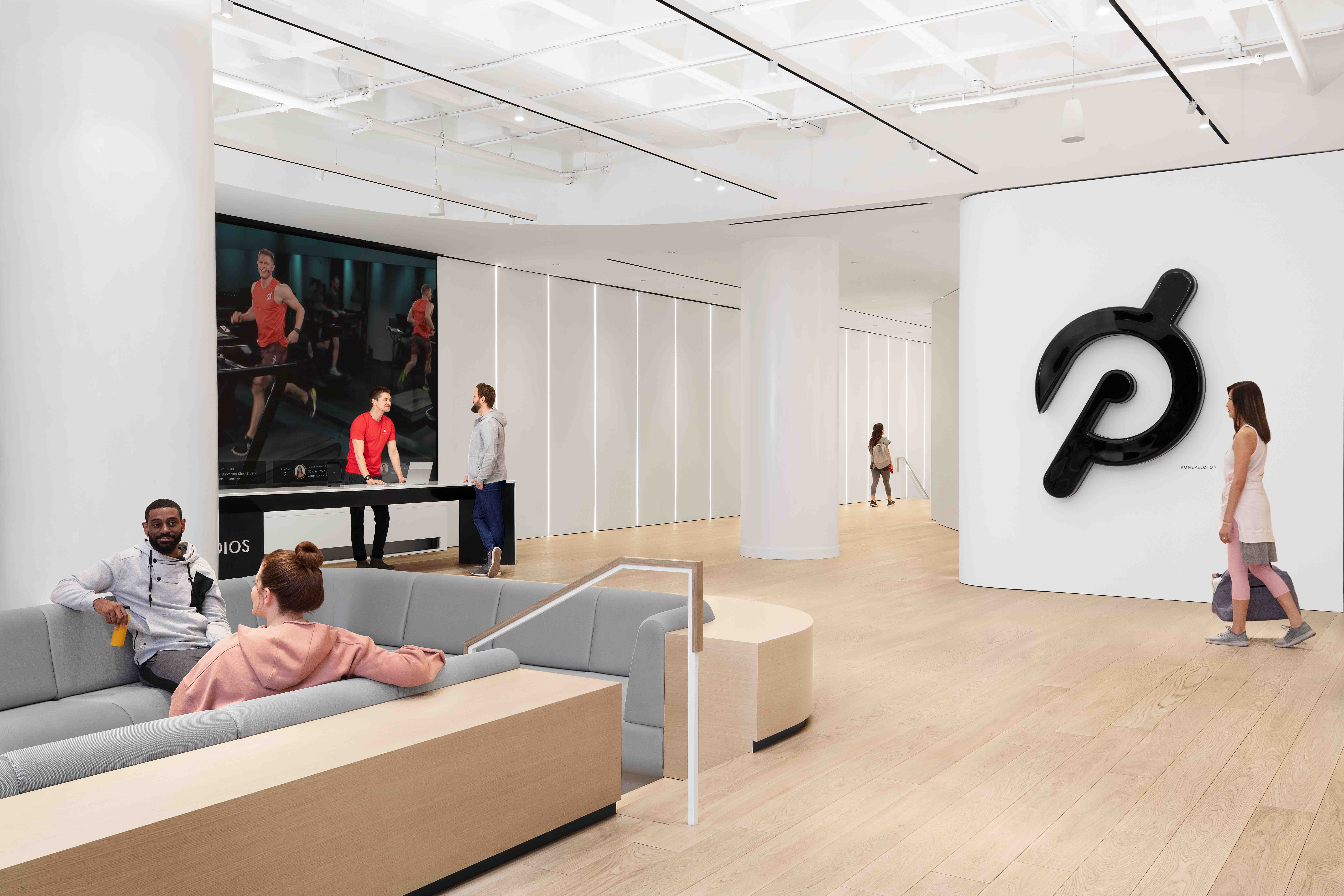 The member lounge at the Peloton New York Studio space.  Courtesy of Peloton

The new studio is also intended to be a gathering place for Peloton members and followers where they can take classes, meet instructors and buy product.

The retail space offers both the hard goods — bikes and treadmills — along with apparel. There is a section of black-and-white tank tops, hoodies, towels, water bottles and caps that are exclusive to the new New York studio. In addition, the spring collection of men’s and women’s apparel and accessories is on display. That includes co-branded product with Lululemon and Nike in the women’s section and Fourlaps, Rhone and Solfire in men’s wear.

Over the past couple of years, Peloton has partnered with a number of apparel brands for its collection including Athleta and Hill City, Outdoor Voices, Spiritual Gangster and others.

Foley said next on the list for Peloton is to open a similarly equipped space in Covent Garden in London in six months. “It will be an equally impressive facility,” he said, adding that that location will also cost $50 million to build.

Beyond that, Foley said there are no immediate plans to open additional studios in the States or internationally. “We’re hoping this one helps scale our verticals,” he said, referring to increasing the number of members and engagement with fitness enthusiasts to its high-energy programming.

In order to access the studio, anyone can walk into the site and take an available class or reserve it in advance online. Peloton also sells monthly memberships for $39 for an all-access, multi-use experience for at-home use, or $12.99 for a digital membership allowing access to the company’s app.

Ironically, Peloton is opening its latest studio in the midst of the coronavirus pandemic. Social media buzz has centered around the company actually benefitting from people being asked to work from home and avoid crowds. “Well, it’s not hurting us,” Foley acknowledged.

Peloton went public last fall with a valuation of around $8 billion. It currently has more than 2 million members.