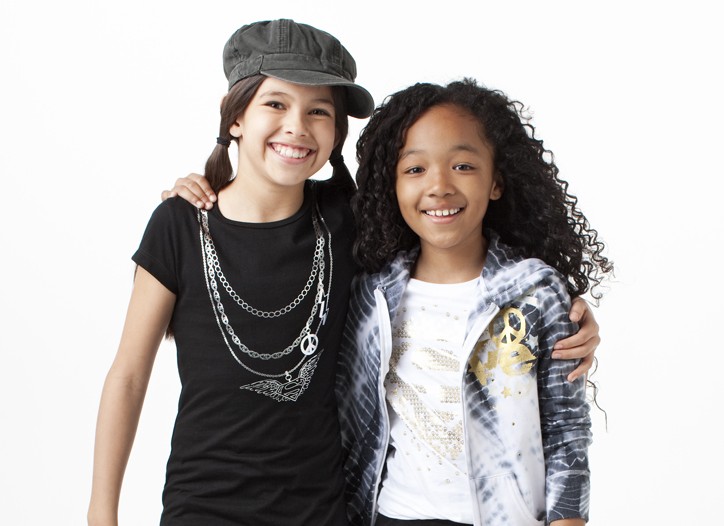 J.C. Penney Co. Inc. and champion Olympic gymnast Nastia Liukin are going for the gold with a full lifestyle collection for girls ages eight to 12, called Supergirl by Nastia.

The line, which will retail at between $20 and $38, hits stores July 20 for the back-to-school season. It includes knit dresses with detachable necklaces, tunics, tops, pants and leggings, as well as a dance and fleece activewear collection. For Penney’s, it also represents a re-entry into the girls’ activewear category.

Supergirl by Nastia is a three-year exclusive partnership among the retailer, Liukin and Warner Bros. Consumer Products, which owns the Superhero property. It will take up prominent real estate in Penney’s girls’ and activewear departments, with placement by the aisles, as well as a hot spot in the center of the department showcasing looks and images of Liukin.

“We’ve seen a big trend towards activewear in our boys’ department, and this is a natural complement to that — an ‘actionista’ collection with a real style quotient,” said Clark McNaught, Penney’s senior vice president and general merchandise manager for children’s apparel. “We’re not slapping a shield on a T-shirt. We’re trying to make it more relevant to what’s happening in the market.”

The Supergirl by Nastia collection will feature burnout and foil T-shirts, tie-dyed hoodies and other contemporary trends downsized for girls that will incorporate the S-shield and more subtle motifs. In fact, there’s not a trace of red in the first delivery, which is mostly black, silver and pink. The line will be manufactured by California-based licensee Jerry Leigh Inc., known for its fashion-forward hoodies and T-shirts.

Penney’s already features a stable of exclusives with California brands in its kids’ department, such as Rusty, Vans, Levi’s and Skechers, as well as Ralph Lauren’s American Living. But apart from skate brand RS by Sheckler, designed by skating champion Ryan Sheckler, there was no other personality-based brand until now.

“We know there is always an emotional connection between girls and a personality like Nastia, as well as an icon like Supergirl,” said Syndi Stark, Penney’s divisional vice president and divisional merchandise manager of girls’ apparel.

Liukin, 20, was the 2008 Olympic All Around gold medalist and won a total of five medals in Beijing. She has been a hands-on partner, meeting with Penney’s design team regularly to share her ideas, many of which she gleans from the girls with whom she trains.

“Being comfortable and stylish is always my goal, and I get so much inspiration from the younger kids, what they wear, what colors they like,” Liukin said.

She has taken a break from competing this year and plans to devote herself to promoting the line with personal appearances and interactive marketing, such as contests via social media.

Penney’s and Warner Bros. declined to give sales projections.

“This collection is a first for us in that it’s more fashion-oriented and it’s also more than just a six- to eight-week output driven by a movie or television show,” said Warner Bros. Consumer Products president Brad Globe.