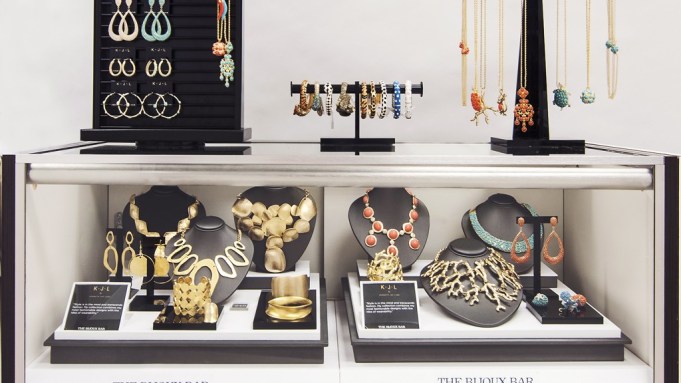 In the retailer’s latest maneuver in its controversial four-year reinvention, several jewelry designers — including some selling to Bergdorf Goodman and Bloomingdale’s and unfamiliar to most Penney’s customers — have created secondary lines for The Bijoux Bar, a new format for the store’s fine jewelry department.

The Bijoux Bar will debut in about 650 Penney’s locations and on jcp.com April 28. Sixteen collections will be in the space, which will extend anywhere from 15 to 34 linear feet, depending on the store. Some with higher-priced items will be sold in a more limited number of stores.

“This is really better fashion jewelry,” said Pam Mortensen, senior vice president and general merchandise manager of fine and fashion jewelry. “Some people call it bridge. We think The Bijoux Bar will attract a new customer and resonate with our current customers. The customer has been in our store but going to other places to buy this product.”

The Bijoux Bar reflects Penney’s efforts to plug holes in the merchandising and generate greater traffic and younger audiences to reverse the weak sales trends. Specifically, The Bijoux Bar fills a void in the jewelry presentation between opening prices and fine jewelry.

The center core, industry terminology for jewelry, accessories, beauty and cosmetics, typically on the main floor, has long been among Penney’s most challenged areas, though the addition of Sephora shops in beauty starting in 2006 did give Penney’s a lift and a solid stake in the sector. Sephora shops in 2011 generated $600 a square foot in sales, compared with Penney’s overall store productivity of $200 a square foot, and continue to be rolled out, though Sephora hasn’t spurred crossover shopping to other areas to the degree hoped.

Last year Penney’s overall revenues took an enormous hit, dropping 25 percent after the retailer tried a mix of everyday low prices and clearances, with no sales to compare old and new prices, or coupons. Ron Johnson, Penney’s chief executive officer, estimated that $500 million in sales alone were lost in 2012 because of not showcasing comparison values. So Penney’s this year is back to staging sales, offering coupons and “high-low” pricing, whereby it marks up to be able to mark down, as most retailers do. Penney’s plans to promote each week and last week ran an Easter sale, with discounts between 20 and 25 percent off across a wide range of merchandise. The Bijoux Bar will adhere to Penney’s new pricing scheme, which is really its old pricing scheme. “It’s almost like ‘back to the future,’” observed Craig Johnson, president of Customer Growth Partners. Not long ago the chain was among the most aggressive promoters in the industry.

While repairing the pricing has been critical, improving the merchandise offering and finding brands and designers to sell the chain seems even more vital and difficult. On the merchandise front, Joe Fresh launched in March; a revamped home floor with 15,000-square-foot furniture departments launches in 200 stores in May, and in the next few weeks, exclusives from Jonathan Adler, Terence Conran, Bodum and Michael Graves should arrive. Martha Stewart is questionable, pending the outcome of the contract dispute involving her company, Penney’s and Macy’s. Inc. Earlier, Pearl by Georgina Chapman of Marchesa and L’Amour Nanette Lepore were launched, and presentations for Levi’s, Izod and Liz Claiborne were converted into shops-in-shop.

“We do believe traffic is improving, and there has been a slight uptick in conversion rate in March, which does coincide with the launch of Joe Fresh and the huge amount of spring dresses on sale in Liz Claiborne, Worthington and other labels,” Craig Johnson said. He also cited $10 coupons as “ubiquitous.”

He believes the lineup of Joe Fresh and other new shops prominently near store entrances projects a clean and inviting appeal, drawing traffic from the mall. Joe Fresh, he thinks, is doing OK, “not flying off the shelves,” and skewing to an existing Penney’s customer, in their 30s and 40s, with fashions that are bright and colorful and more safe than edgy.

The cornerstone of Ron Johnson’s plan is to turn Penney’s into an umbrella for 100 shops-in-shop that will bring a fresh look to the retailer’s stores. Starting April 18, The Bijoux Bar will be featured on the jcp.com landing page and will have its own dedicated brand page. The Bijoux Bar will be included as a stitch-in book in the JCP mailer going to customers on April 28 and will be included in the dedicated fine jewelry mailer going to customers that day as well.

Penney’s hopes The Bijoux Bar could be a significant contributor to revenues and might stimulate more impulse shopping, which is often the case with jewelry. The Bijoux Bar will have a horseshoe configuration with its own fixturing and will be in a prominent spot in fine jewelry, next to Sephora, which is among Penney’s most productive shops.

Some of the designers for The Bijoux Bar have made careers selling in luxury stores and with Penney’s are venturing into mass distribution for the first time.

“Penney’s actually came to me. They were looking for something specific, for what I’m recognized for,” said Lana Bramlette, who has created the Downtown by Lana line exclusively for The Bijoux Bar. “It’s basically my homage to my favorite cities around the world — Chicago, New York, San Francisco and London. It captures the feeling of the downtown lifestyle and street style.”

The collection revolves around textured, colorful “boho chic” looks; a “rocker chic” component for flashier, embellished items, and a “sleek chic” architectural look. There between 60 and 75 styles, including necklaces; earrings and bracelets in highly polished plated brass, and crystals priced between $30 and $75. “This is something you definitely wear to be noticed,” Bramlette said. “It has a flavor of someone self-aware or self-assured, open to fashion and really trend-driven,” with layering necklaces, long chains and big bracelets.

Bramlette formed a second company to develop the collection, in addition to the one she operates for her high-end jewelry, which she said sells at Neiman Marcus, Nordstrom, Bloomingdale’s and Harrods. The new company, Bramlette said, could supply more retailers in the future. Given industry concerns over Penney’s dwindling cash pile and the costly rollout of shops-in-shop, it’s logical that designers and suppliers nurture other retail partnerships. Asked if getting paid by Penney’s was a worry, Bramlette said, “No. They are an innovator. They are transforming and so am I. We are on the same path…”

A Penney’s official assured that Downtown by Lana is exclusive to Penney’s. She would not disclose the length of the exclusivity agreement.

Kara Ross, who is known for raw precious stones, 18-karat gold and diamonds, has created 10021 Kara Ross for The Bijoux Bar. “The inspiration is the raw gemstones from my fine jewelry collection,” Ross said, adding that she sells jewelry priced $4,000 and higher at such stores as Bergdorf’s and Neiman’s and has a fashion line priced between $100 and $400. She said her The Bijoux Bar line is an opportunity to explore a lower price point and reach a larger audience with “everyday pieces that are wearable and chic.” There are 43 styles, priced between $45 and $225, including necklaces, bracelets, cuffs, earrings and rings in 18-karat gold-plated brass, glass and resin. The collection will be in more than 400 of The Bijoux Bars, she said. The zip code is for the Upper East Side, where Ross began her business. She described the partnership with Penney’s as a standard wholesale-retail relationship. “We are designing this collection for them. I am spending the money [to design it], and they are buying it,” though sometimes Penney’s buyers request design changes, such as making a pierced earring a clip-on.

Another exclusive line is by Kenneth Jay Lane, a name that’s widely distributed through the mass channel and would be familiar to many Penney’s shoppers. KJL by Kenneth Jay Lane is a collection of necklaces, bracelets, earrings and rings in plated brass with glass and resin, priced between $35 and $150.

Other lines for The Bijoux Bar are:

• Telio by Doris Panos fine jewelry with a Mediterranean twist, with necklaces, bracelets and earrings in plated brass with glass and crystals, priced between $45 and $130.

• Rodrigo-Brave, designed by Rodrigo Otazu, featuring bracelets, earrings, necklaces and rings in plated brass with glass and crystals, priced between $55 and $395 and inspired by art, music and different cultures.

• Diego Massimo necklaces, bracelets and heart charms in 18-karat gold and black rhodium and white rhodium plating over brass. The price range is between $75 and $195.

Asked on what basis Penney’s selected designers for The Bijoux Bar, Mortensen said, “We were trying to look at a cross-section. Each designer has a distinct and unique aesthetic. There is something for every woman at every age at any taste level for any occasion. Customers really want fashion jewelry. They want to change their earrings with every outfit.”