The retailer unveiled new in-store shops for Levi’s, Arizona Jeans and the new I Jeans by Buffalo, initiating the next leg of its reinvention. 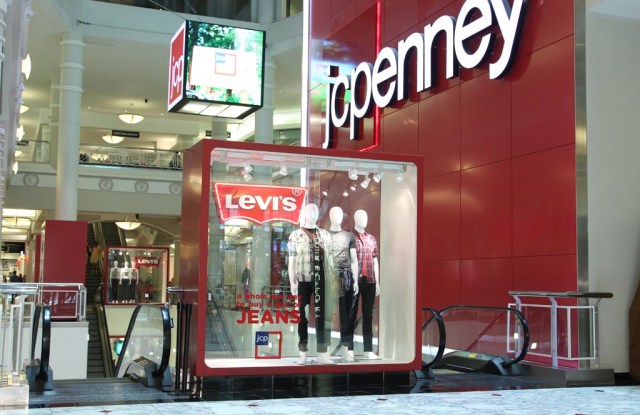 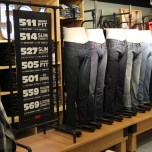 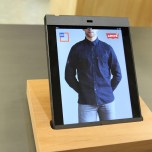 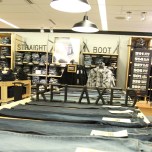 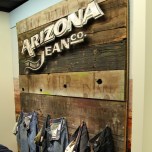 This story first appeared in the July 24, 2012 issue of WWD. Subscribe Today.

The chain — which has simplified its pricing structure by eliminating coupons and is overhauling its marketing message — unveiled the first of its new branded shops-in-shop Monday, pushing chief executive officer Ron Johnson’s transformation of the retailer into the next phase.

The initial wave of shops includes separate men’s and women’s outposts for Levi’s, Arizona Jean Co. and the new I Jeans by Buffalo. The shops will be in 683 of the retailer’s 1,100 doors by Aug. 1, but the new merchandise will be available across the chain.

The Levi’s shop marks the biggest change for Penney’s. It features a denim bar with 11 cuts and 88 washes-finishes. The shop features clean lines, gray tiles, wood fixtures and a tablet computer with access to Penney’s virtual denim bar. Levi’s helped train the sales associates in the area, who are Penney’s employees and will be armed with iPads and able to check shoppers out on the spot. Mobile checkout — a key feature of Johnson’s previous existence as head of Apple retail — will debut in all Penney’s stores by yearend.

“We are on the move and we’re just getting started,” said Ben Fay, executive vice president of real estate, store design and development, during a tour of new shops at Penney’s store in the Manhattan Mall here.

All the shops will be introduced during the back-to-school season, and Penney’s is trying to drive traffic next month by offering free haircuts at its salons for kids headed into kindergarten or grade school.

Outside of the denim bar and iPads for checkout in the new Levi’s setup, the first round of shops is composed of tried-and-true retail display concepts put together to create a more cohesive space. Mannequins face aisles and draw in shoppers, while fixtures, tables and signage delineate the branded shops. Fay said future shops could “suggest a storefront.”

“We have to be careful with our capital,” Fay said. “It doesn’t mean be cheap, but we’ve got to be smart.”

The company is trying to be penny-wise in a variety of ways. Streamlining its pricing has made it cheaper to maintain the store and there have been layoffs throughout the organization, the most recent two weeks ago when Penney’s cut 350 jobs at its headquarters in Plano, Tex.

To further bolster its balance sheet, the retailer on Monday said it raised $248 million in cash from Simon Property Group Inc. when the real estate firm redeemed 2 million units of Penney’s limited partnership interest in Simon’s operating subsidiary. Penney’s described the investment as a “noncore asset.”

The move raised a few eyebrows on Wall Street.

“This action comes three months after the company announced the elimination of its dividend, leading us to wonder if the additional liquidity was needed to buffer weak fundamental retail results,” said Deutsche Bank analyst Charles Grom.

In-store shops devoted to the new JCP basics apparel brand, Izod and Liz Claiborne will launch in September. If all goes according to plan, new shops will roll out each month until 2015, by which time Penney’s will have trimmed down from carrying 400-plus brands to about 100 shops.

Penney’s is steering a more fashionable course with its reinvention. New offerings for fall will include accessories from Betseyville by Betsey Johnson, Lulu Guinness and Vivienne Tam, as well as young men’s from DC and girls fashions from Dream Pop by Cynthia Rowley. Next year, styles from Marchesa’s Georgina Chapman and William Rast will be added, along with Watchgear by Tourneau.

The rollout of shops-in-shop is a key element of Johnson’s ambitious transformation plan, which customers began to get a taste of Feb. 1. The results since have seen plenty of bumps along the way. Sales were weaker than expected, first-quarter losses tallied $163 million and president and image guru Michael Francis left after only eight months on the job, leaving Johnson to handle marketing personally.

Change on such a large scale is inherently tough for such a big organization, but the rewards make it potentially very lucrative. Activist investor and board member William Ackman, who controls 25.2 percent of the company’s stock and helped recruit Johnson from Apple Inc., has been an advocate of turning the department store into a collection of specialty concepts and points to sales per square foot as a reason to make the change.

Getting anywhere near that would make for many happy investors. The stock rose 1.1 percent to $20.84 Monday.