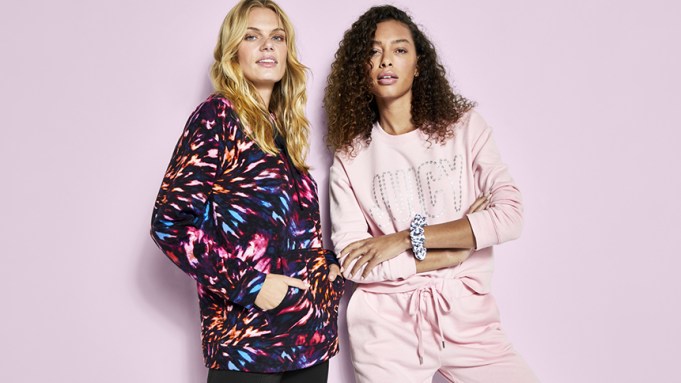 J.C. Penney, inserting the L.A. spirit, some irreverence and a touch of nostalgia to its assortment, today launches Juicy By Juicy Couture.

It’s a new brand — a “derivative” of the original Juicy Couture collection — selling exclusively at 501 J.C. Penney stores and on jcp.com, initially with women’s fashion and timepieces. Accessories, babies, girls, home, sleepwear, footwear and gift sets will soon be added to the offering.

According to officials from the Authentic Brands Group, which owns Juicy Couture, Juicy By Juicy Couture adheres to the DNA and spirit of Juicy Couture and will feature an updated spin on the brand’s signature tracksuit, launched in 2001. Juicy’s tracksuit was a red-hot fashion statement for several years.

Some consider Juicy Couture the original athleisure line. The brand was launched in Los Angeles in 1997 and purchased by ABG in 2013 for $195 million from Fifth & Pacific, which was formerly known as Liz Claiborne Inc.
“Juicy By Juicy Couture stays true to the ethos and DNA of Juicy Couture. It’s a brand derivative,” said Natasha Fishman, ABG’s chief communications officer and executive vice president of marketing. “The line is designed to really maintain the essential Juicy aesthetic and pick up on its core elements. The word ‘spirited’ applies here. It’s fun, feminine — the key item is the tracksuit. It’s accessible glamour.” Joggers, leggings, cropped sweatshirts and hoodies are part of the line.

According to Fishman, Juicy Couture’s volume, at retail, is between $400 million and $500 million. She said Juicy has a global distribution with department and specialty stores. The brand is sold at Nordstrom, Macy’s, Saks Fifth Avenue, Selfridges, Foot Locker, Simons, Urban Outfitters, neimanmarcus.com, Hibbits and other retailers around the world, including in China and Korea. Next year, Juicy Couture will also be sold at stores in Israel and India.

Currently there are 32 Juicy Couture stores — 15 in China and 17 in South Korea — as well as an e-commerce site. Penney’s is currently working with ABG on Juicy By Juicy Couture lines through fall 2022.

“We really have been able to expand the brand and make it regionally relevant,” said Fishman. “Juicy uniquely relates to girls all over the world. There is definitely an active and loyal following of legacy shoppers, while it’s continuing to grow with Gen X,Y and Z. We have an incredibly robust social media platform. We launched on TikTok last year, and have picked up significant momentum. Our Instagram audience is up 6 percent this year.” With Penney’s, an influencer program for Juicy by Juicy Couture is being developed.

Fishman maintained that Juicy Couture is as relevant to younger audiences as it is to older ones, and that ABG has worked hard to maintain its relevance. “It’s really more about an attitude, that unapologetic attitude that’s been there from the very beginning that has continued. It imbues confidence and self reliance. The Juicy business has not waned,” said Fishman. “Juicy has the luxury of being new and being vintage.”

Additionally, ABG is in a joint venture with the Simon Property Group called SPARC which owns Brooks Brothers, Eddie Bauer, Nautica, Forever 21, Lucky Brand and Aéropostale. ABG is helping to strengthen the merchandising at Penney’s, which was bought out of bankruptcy last year by its new owners, Simon and Brookfield Asset Management.

Michelle Wlazlo, Penney’s executive vice president and chief merchandising officer, said Juicy By Juicy Couture represents “a new, glamorous lifestyle brand to shop” and highlights “the diverse style” offered at Penney’s. Since joining Penney’s from Target in February 2019, Wlazlo has been leading efforts to differentiate and sharpen the identity of key in-house labels, like St. John’s Bay, Xersion and a.n.a. Women’s selling floors have been reset with an easier-to-shop, lifestyle format and the company has closed scores of underperforming stores and eliminated certain merchandise lines and labels.

Wlazlo first broke the news in a WWD interview last April that Juicy Couture would be added this year. “We are excited to have ABG help us fill some white space in our portfolio,” Wlazlo said at the time.