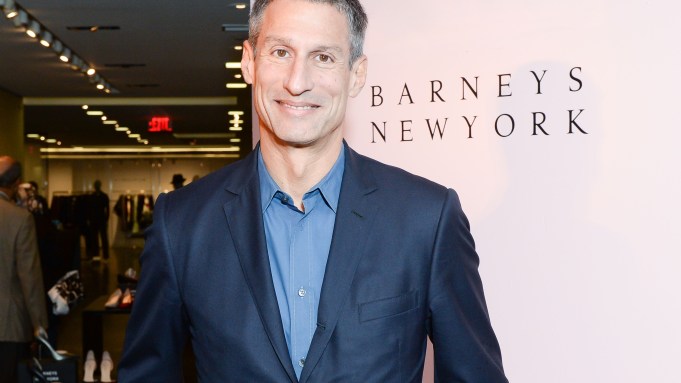 Richard Perry, the majority owner of Barneys New York, has retained Goldman Sachs to sell a piece of the luxury retailer, according to a company source.

While Perry couldn’t be reached for comment on Wednesday, it is presumed that the billionaire hedge fund manager would retain his majority stake in the business. Perry has been the majority owner since 2012 when he purchased most of the luxury chain’s $600 million in debt at the time, in exchange for equity.

Meanwhile, speculation that Barneys chief executive officer Mark Lee is on the verge of leaving the company appears to be false. A source close to the company said Lee plans to continue in his role as ceo “for the near future,” with Daniella Vitale continuing as chief operating officer. Last winter, initial speculation that Lee was leaving Barneys was vehemently denied by Barneys officials.

A report about Perry retaining Goldman Sachs and speculation about Lee, appeared in the New York Post on Wednesday. A company insider dismissed the Post’s reference to Barneys’ declining earnings before interest, taxes, depreciation and amortization and comp store erosion as inaccurate and said Barneys is “outperforming” the competition, with the company on an overall growth track. The strongest growth is being generated by Barneys’ web site and the new store in Chelsea on Seventh Avenue and 17th Street, which opened last February, the source indicated.

Still, on the brick-and-mortar front, challenges lie ahead. Barneys has been coasting with favorable rents at its Madison Avenue flagship ever since it emerged from bankruptcy in 1998 and commenced a 20-year lease in 1999. It has renewal options beginning in 2019, but that’s when the rents are subject to market rate adjustments and would theoretically skyrocket.

Sources told WWD on Wednesday that the lease continues to be under negotiation and that it would be highly unlikely the Madison Avenue site would be abandoned by Barneys. However, Barneys is in for some hardball negotiations with its landlord, Flagship Capital.

With the future market rate adjustment, Barneys’ rent on Madison Avenue might at least double, with estimates ranging from well over $30 million to topping $40 million.

While Madison Avenue rents have soared over the last several years, this year, there has been some softening of the market, which could help Barneys’ bargaining position.