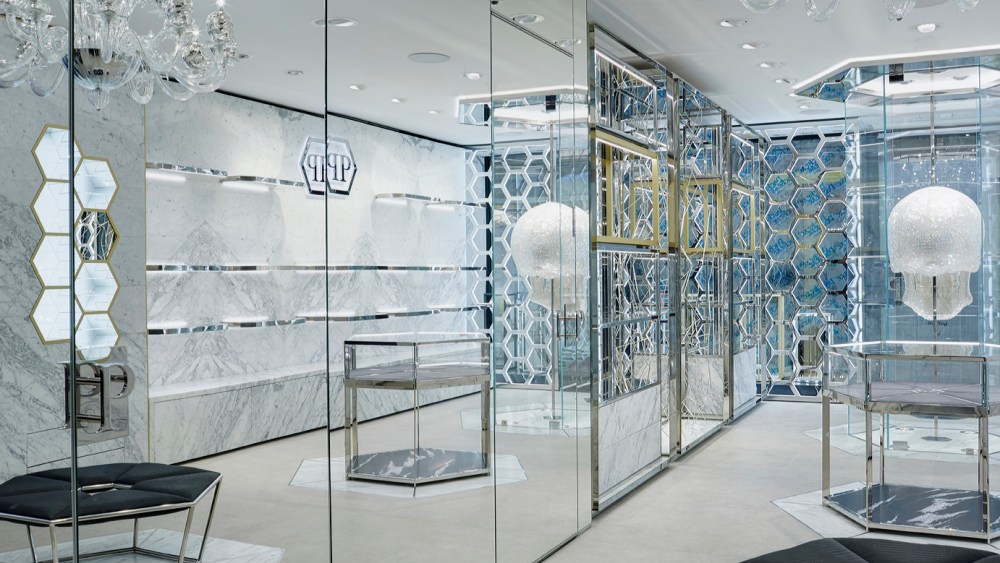 LONDON — Philipp Plein is continuing his retail expansion with two openings in Europe. The brand’s store in London, located on 98 New Bond Street, opened Thursday, and a new location in Paris for the company’s activewear line, Plein Sport, opened Friday.

Plein, the 38-year-old German owner and designer of the luxury label, said that his aggressive retail strategy stems from being a firm believer in the power of classic retail and the in-store experience.

“You know what makes a brand become a brand? Visibility in the market. Advertising is important but what counts is presence, that’s why we still need classic retail,” said Plein during a preview of the brand’s London flagship. “To this date no luxury fashion brand was built digitally, digital is only a complimentary channel. You still need the flavor of the luxury experience; going in-store, touching the product, feeling the atmosphere. All these elements come together to create the brand image.”

Plein pulled out all the stops to communicate his brand image of unabashed luxury in the New Bond Street boutique, which spans 4,520 square feet and is developed across three floors. It houses the brand’s full accessories, men’s, women’s and children’s wear ranges. The store features a mix of materials from raw concrete floor to glossier dark marble displays and glamorous chandeliers. The brand’s signature Swarovski skull installation graces the entrance, while the children’s wear section on the first floor features more playful elements such as M&M candy dispensers.

The label’s hexagonal shape is prominent throughout the space, on hexagon chairs and mirror tiles on the walls.

Even though Plein still likes to see his company — which is based in Lugano, Switzerland and was launched in 2008 — as a start-up, he was particular about securing a prime location on Bond Street for his first U.K. store, unlike other labels which prefer nearby Albemarle or Dover Streets, when opening their first retail locations in London.

“When you sell luxury you have to position yourself close to your competitors, to ensure the right visibility. It’s just like a food market, where each stand is placed next to the other and you have to choose. They are all so close together because that’s where the consumer is, there are synergies in between and you want to participate,” added the designer. “This is how the market works and we are not here to reinvent the market, we are not big enough to do that.”

The new London location will tap into the city’s international clientele which includes consumers from Asia and Eastern Europe where the brand is most established, but Plein also sees opportunity in attracting a new customer base.

“We are a young brand so we have the potential to attract completely new clients, who will come into the store for the first time to experience the label,” Plein said.

The designer is extending his retail expansion plans to the U.S. as it courts new customers.

“When you open in America, a new market for us, 90 percent of the people don’t know the brand, so they walk in and they don’t know what to expect — and that’s what we call brand-building. You have to enter and start to communicate. And the shop is nothing else but a meeting point for people. It’s a communication tool,” added the designer, highlighting the company’s most recent opening in Philadelphia, earlier this month.

Plein, who is best known for his over-the-top bejeweled sneakers, studded leather jackets and logo T-shirts, admits to feeling like an outsider in the industry and credits his success to this “outsider” status. “Sometimes it’s better to be outside, because when you are inside, you no longer see the bigger picture,” he said. “This is how we approach the business and this is the reason we exist. We are not Coca-Cola because when you are Coca-Cola you are for everybody, we are Whisky-Cola, we are for 1 percent of the people.”

Across the Channel, Plein is opening the first-ever point of sale for his luxury activewear brand Plein Sport. The brand mainly consists of cotton workout clothes for men tricked out in the designer’s trademark style, with the Plein Sport signature tiger motif and motivational workout slogans.

The boutique is located on Rue de Rivoli just steps from the Paris flagship for the main Philipp Plein brand, across from the Tuileries Gardens and Orangerie Museum.

The 1,000-square-foot space designed by CLS Architetti Milano resembles a blinged-out CrossFit gym, with the clothes suspended from faux dumbells and with imitation weight benches serving as the only seating. LED panels that completely tile the floor of the main showroom flash up video clips from Plein Sport’s promotional spot — including in the dressing rooms.

Hanging amid the hoodies and gym shorts, customers can find a punching bag upholstered in pleather faux-crocodile skin.

Female fans of the designer need not dismay: a women’s collection for Plein Sport is slated to hit shelves for pre-fall. After initial openings in Paris, Amsterdam and Milan, 20 to 25 additional Plein Sport stores are planned to open in the coming months.

The designer is also planning an additional 25 store openings for his main brand in locations including Bucharest, Philadelphia, Lotte, Seoul, Sawgrass, Barcelona and Beijing. And he is in the process of finding a location and creating the concept for his next fashion show, which will take place during New York Fashion Week in February.