What are four walls worth? It’s a surprisingly complex but vital question facing retailers in these digital days. E-commerce is giving brands most of their growth. The mall is less of a place to hang out and more of a place to get in and get out. And Wall Street has turned its back on so many of the darlings of yesteryear.

But the majority of sales — more than 92 percent — still come at a store’s register. That puts retailers, particularly mall specialty players, in a tough spot. And Wall Street knows it, as mall players get very little credit from investors for their vast store networks.

A WWD survey of publicly held retailers, including 16 prominent specialty chains and off-pricers, showed a stark divide between the strongest players — Ross Stores Inc., TJX Cos. Inc. and Victoria’s Secret parent L Brands Inc. — and nearly everyone else.

Portioning out the retailers’ collective market capitalization among their more than 25,000 stores, the survey showed that each door is worth $4.7 million to investors, while they bring in $3.9 million in sales annually. But almost all of that strength comes from the top three. Investors, for instance, give Ross Stores an average per-door market cap of more than $17 million, while TJX doors are each worth $12.9 million and L Brands stores are valued at $9 million.

The rest of the group has an average per-store market cap of $1.3 million, with a few relatively stronger players and plenty of companies with headaches: Pacific Sunwear of California Inc. and Aéropostale Inc. both have per-store valuations in the $25,000 area.

These companies have Web businesses that are growing, but e-commerce is also dependent on the marketing oomph and the shipping capabilities of the stores — making market cap by store a rough, if telling, metric.

That so many retailers get so little credit for their primary sales outlet is a sobering thought and a strong sign that even more change is coming to the already strained sector.

Oliver Chen, a retail stock analyst at Cowen and Co., tied the difference between retail’s haves and have-nots to their “prospects for growth” and “who deserves to exist given apparel deflation trends and an overdeveloped mall.”

“We’ve seen so many things come and go in retail,” Chen said. “Which concepts will stand the test of time and which won’t? The market’s being pretty harsh about penalizing those who are at risk.”

Retailers aren’t in this fight alone.

“In this ecosystem, it is also up to the mall owners to help drive relevant traffic, because they don’t want zombie retailers,” Chen said. “So, can pureplays play a role in the future of the malls? Can food and fitness and health care play a role with malls? Should there be a SoulCycle in the middle of Macy’s? Stuff like that.”

As the mall transforms and companies struggle, the pressure to consolidate the market increases — although there are few buyers for specialty chains beyond Ascena Retail Group Inc., which bought Ann Inc. last year, and Stefan Kaluzny’s Sycamore Partners, which acquired Hot Topic Inc., The Talbots Inc., Nine West and more.

There’s been a lot of talk of more consolidation, but an anticipated wave of retail leveraged buyouts from private equity players has not materialized.

Citi analyst Paul Lejuez said in a note to clients that “Anything can look good on paper, but…”

“It is not surprising that we have heard increased chatter about private equity as softlines/ department store stocks have been extremely weak recently,” he said. “But are any deals really likely to happen in our group [of stocks]? We don’t think the chances are high — the appealing businesses are generally expensive and the cheap ones aren’t generally appealing businesses. If we were wearing our private equity hats, the businesses we would want to consider are L Brands, Tiffany & Co. and Lululemon Athletica Inc., though size and valuation may stand in the way. And while we have been asked about Kohl’s Corp., Macy’s Inc. and Chico’s FAS Inc., business considerations make these unlikely to occur.”

The overriding danger for struggling mall retailers is that they won’t have the resources to really reinvent or a sharp enough brand to be acquired.

Edward Yruma, an analyst at KeyBanc Capital Markets, sketched out a simple thought experiment to gauge the prospects of retailers.

“If the store disappeared, would anybody miss them?” he asked, wondering if customers would take to social media to bemoan the loss of some of the sector’s weaker companies.

Much of it comes down to traffic.

“The stores have to figure out what’s going to make someone step [inside],” Yruma said, pointing to the increasing importance of e-commerce and mobile technology. “If you don’t [get more shoppers into stores] that’s a tough thing longer-term.”

Better malls — categorized as A malls — are more or less holding their ground and the retailers there have more time to adapt.
David Simon, chairman and ceo of mall operator Simon Property Group Inc., told stock analysts last week that customers are still coming.

“I know you’ve all heard about mall traffic decreases,” Simon said. “Well, let me give you some facts based on our internal data across the largest retail portfolio in the U.S. and not just estimates derived from arbitrary algorithms. Traffic at our malls was flat for [2015], including the holiday season. Traffic at our premium outlets increased 1.5 percent for the year and more than 2 percent for the holidays.”

Shyam Gidumal, leader of the consumer products and retail segment at Ernst & Young, said investors are trying to figure out which retailers really drive traffic to their stores and which are “availability businesses,” based more on convenience.
The divide is becoming more stark.

“Retailers have a wider spread of performance now,” Gidumal said. “These traffic patterns have shifted enough that stores that would have been marginal are now substantially underperforming. I think you’re starting to see investors look at it more as, you’re a portfolio of stores with a brand franchise. I don’t think that investors have gotten to a stage where they think stores are a liability.”

In the end, it seems the trick is to do what Ross Stores, TJX and Victoria’s Secret have all done: find ways to bring shoppers into the stores, whether by stoking a branded shopping safari experience or tapping into some high-wattage sex appeal. Or a deal that can’t be passed up.

“If you can influence a meaningful customer base to show up in your location, you’re starting to get the perception that you will have a lot more flexibility in where you locate and therefore you’re able to manage your rent expense,” Gidumal said.

It’s retailing 101: Get shoppers into the stores. Or else. 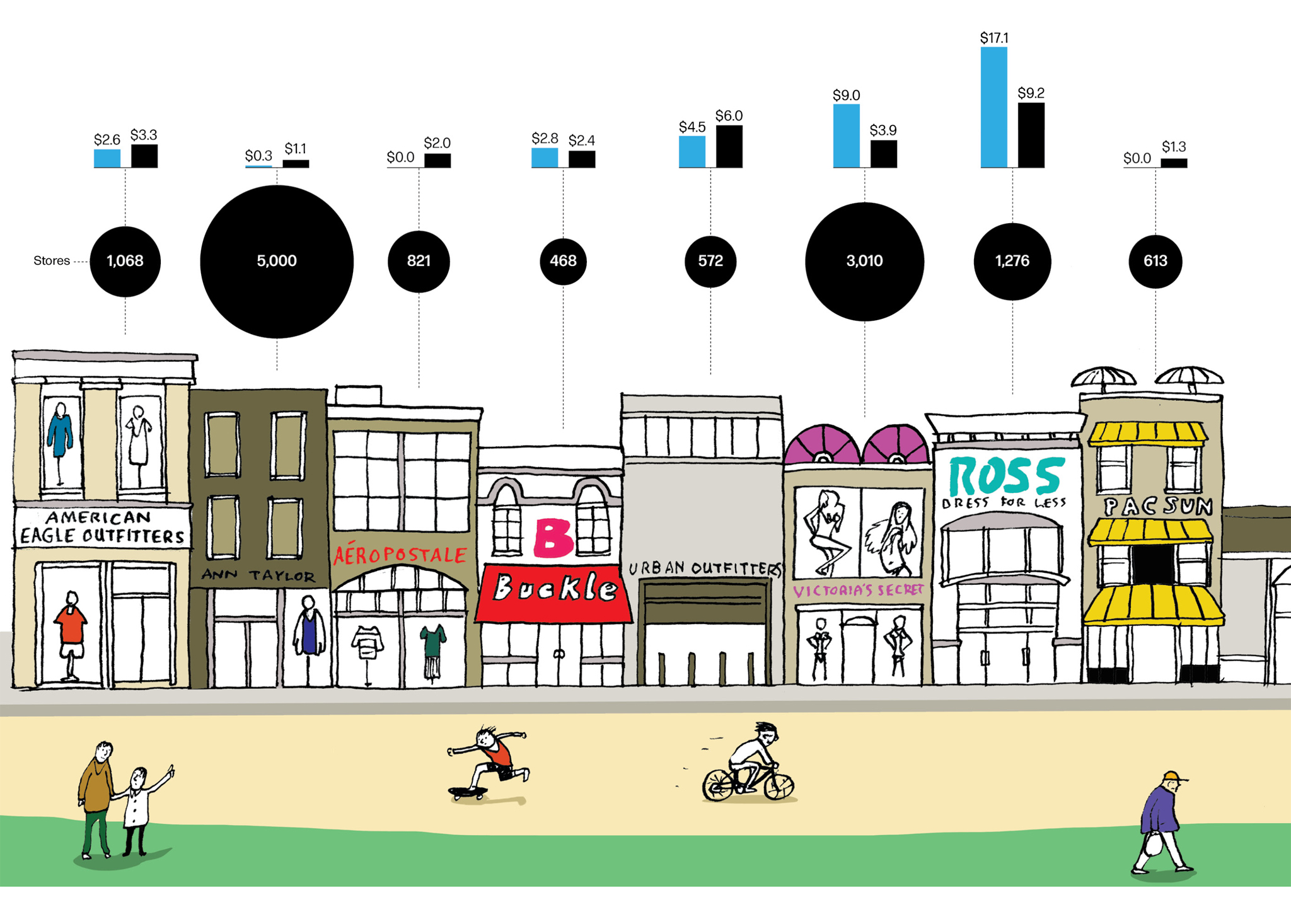