The historic stationery company has found a new home in a 3,229-square-foot space on central Via Manzoni.

MILAN — In a world getting increasingly more digital, there is still room for luxury paper and pens, as historic Florentine brand Pineider is proving.

The stationery company, which was on the brink of liquidation in 2017 until the Rovagnati family took over the company, has recently opened a flagship on Milan’s central Via Manzoni. The 3,229-square-foot space, located on the ground floor of the prestigious Palazzo Trivulzio, which also houses the Poldi Pezzoli Museum, was formerly occupied by a Feltrinelli bookstore.

“Previously, this store looked like a white box, but when we started the renovation works we discovered beautiful floors, skylights and these stunning, almost 20-foot-high glass doors facing the palazzo’s courtyard,” said Pineider managing director Giuseppe Rossi, who gave the commission to create the brand’s store concept to Milan-based studio Paolo Badesco & Partners.

“We curated the project from the first steps to the actual development, by studying and rediscovering the brand’s heritage,” said Paolo Badesco. “Giving a strong identity to the rooms of the former Feltrinelli historic bookstore has been the main goal of the project. We chose plaster frames crafted by skilled artisans, as well as handmade tiles by an antique Sicilian firm and we decided to exalt the sumptuous central skylight and the glass doors opening on the courtyard.” 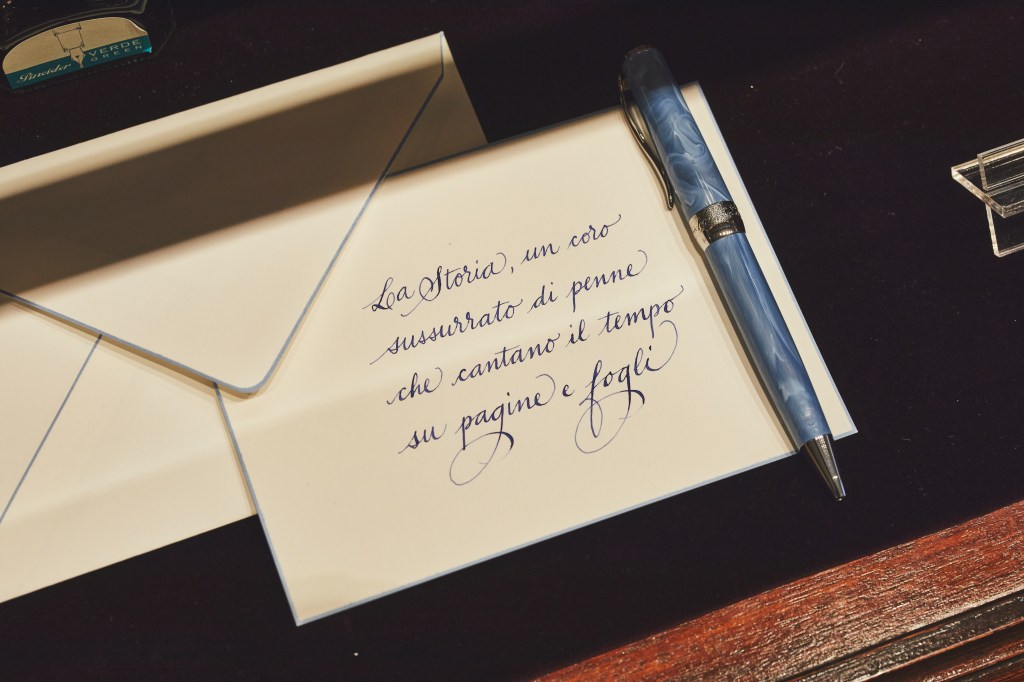 The store carries the whole Pineider offering, spanning from high-end pens and customizable paper to a range of men’s and women’s leather briefcases and work bags, which are also distributed by Milan-based accessories showroom Massimo Bonini.

“This flagship in Milan is conceived to show who we are to an international audience and now the goal is to replicate this concept with franchised corners and shop-in-shops across the world,” said Rossi, who added that last June the brand opened two shop-in-shops, one at Beymen in Istanbul and one at Isetan in Tokyo, while an additional one is expected to bow at KaDeVe in Berlin during the first quarter of 2021.

In addition, Rossi said the company aims to revamp its stores in Rome and Florence with the Milan concept.

The pen division is the fastest-growing category, according to Rossi, even if paper is also seeing a positive “mini-growing trend.”

“Pens and paper are perfect to be sold online,” said Rossi, revealing that Pineider is performing well on the most important luxury online shopping destinations, including Mr Porter, Luisa Via Roma and Matchesfashion.

“However, we have great expectations also for the relaunch of the leather goods division,” said Rossi, who revealed that before the coronavirus outbreak the company was expecting to close the year with revenues of 4 million euros. “We didn’t make any new forecast but we have very good expectations for the last three months of the year, which are usually key for our business segment.”