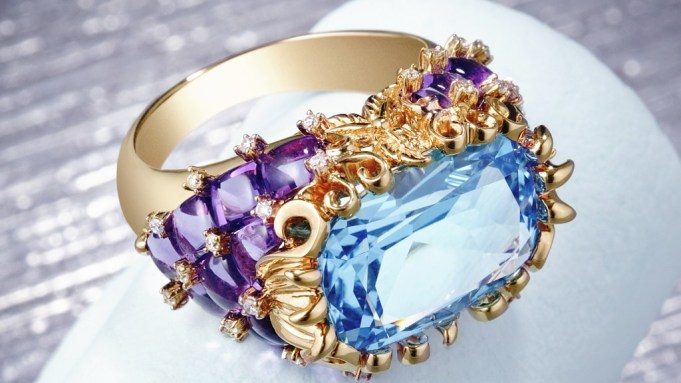 Plukka.com is Joanne Ooi and Jai Waney’s answer to the scant selection of e-commerce sites dedicated to fine jewelry.

The e-tailer, which launches today, aims to weld the group buying mechanism and manufacturing directly with a consumer retail paradigm that Ooi refers to as the “Plukka Value Proposition” — and at the same time offer on-trend, in-house-designed jewelry that costs between 70 and 90 percent less than the normal retail price.

“We don’t manufacture a product unless enough customers want to buy it. The more Plukka sells of an item, the less it costs the customer. If your friend buys the same item as you, it costs you less, provided your friend buys before the event deadline,” co-founder and chief executive officer Ooi told WWD of the real-time, reverse-auction-pricing model, multilevel referral incentives and social shopping practices that the site has adopted. She added that a patent has been filed for what she refers to as the “unique sliding scale calculator, which shows the price of an item falling in real time as more people buy it” in real time.

She refers to the current state of fine jewelry pricing as a “black box” to consumers. Along with director of business development Elle Hill — who has two decades’ worth of experience in the fine jewelry category — the two discovered that an almost $1,000 designer piece of sterling silver jewelry cost just $32 to make.

Upon further investigation, Ooi learned that it’s not unusual for a designer or brand’s jewelry to be marked up 30 times, and after a quick survey of the category, she concluded that markups vary between five and 30 times, with the average lying between five and 10 times.

“That’s what led to this huge epiphany,” Ooi said of the site that she and Waney financed at a Series A level. “[Our] business model potentially throws a lifeline to the manufacturing sector. Plukka enables manufacturers to directly sell to consumers and gain margin for the first time in decades. The Plukka business model sidesteps all of the deficiencies of group buying and flash sales, which are dependent on the existence of excess capacity and overstock. Instead, Plukka eliminates inventory risk in the first place.”

She projects between $5 million and $10 million in sales the first year.

Hardly a newcomer to the industry, Hong Kong-based Ooi was responsible for helping to revive the Compagnie Financière Richemont SA-owned Shanghai Tang in her seven years as creative and marketing director of the brand. Before that, the Singapore-born and Cincinnati-raised Ooi, who is formally trained as a lawyer (but “wanted to escape that as soon as possible”) relocated to Hong Kong after visiting the city in the mid-Nineties, working with brands such as Stephane Kélian, Katayone Adeli and Daryl K before opening two of her own boutiques and founding NGO Clean Air Network. In 2005, she appeared on the cover of Fast Company for revitalizing Shanghai Tang and, in this year, she was nominated for Time’s 100 Most Influential for her work on Hong Kong’s air pollution.

Plukka’s prices can go from $200 to $20,000, but the median price range will hover between $500 and $700 — featuring pieces comprised of 18-karat gold in varying shades, diamonds and every color and size of semiprecious and precious gem stones. Products are manufactured in the same factories as some of the top luxury brands, according to Ooi.

While it will start out as a “push model” based on an event-, newsletter-driven format with items that sell out within a certain amount of time, Ooi intends to transform this into a “pull” model.

“[Eventually we] will be selling hundreds of products — where you will come to us looking for something. It will become a very different model with a catalogue of products sold through the same mechanism, but with a deeper stock within each product category.”

The premiere sale will feature an $1,800 emerald-cut, blue topaz ring, set among 18-karat gold, diamonds and amethysts, affixed with tendrils of gold to resemble the spine of a sea urchin (which Ooi said might typically retail from $6,000 to $8,000). On Wednesday, a black rhodium sterling silver ring will go on sale that has 6 carats of gemstones arranged in a peacock feather motif — including rubies, orange sapphires and citrines. There will be a new, limited-time event — where customers will be notified via e-mail — introduced every other day to start, but this will take on a daily format in a few months.

“Plukka could only exist online,” Ooi said. “We are able to offer edgy, crazy things that would never see the light of day because a typical retailer doesn’t have the cost structure and the courage to actually sell this piece. I will be the arbiter of whether this is worthwhile to offer to the public.”

But Ooi wants to cater to the more mainstream audience, too — and she cites a cushion-cut amethyst ring that has a cloverleaf-shaped frame with diamonds surrounding it as evidence of this. Plukka will also launch a “forever” collection of basics in the coming months that will include diamond bangles, hoop earrings and stackable rings in varying colors of gold and diamonds.

Plukka will launch a mobile app before the end of 2012, and there are plans to unveil the site in Taiwan, Southeast Asia and Europe within the next year.