Poleci, the contemporary label with the oft-mispronounced name, is in expansion mode. 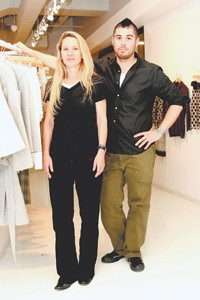 DALLAS —Poleci, the contemporary label with the oft-mispronounced name, is in expansion mode.

After quietly building close to a $30 million business since 1990, Poleci (pronounced policy) has launched a diffusion collection for fall and aims to introduce belts and handbags for spring ’07, sunglasses in spring ’08 and shoes in fall ’08, according to Janice Levin-Krok, creative director of the Los Angeles company. She’s also scouting for a store location in Europe and would like to open in London or Paris within a year.

“The business has grown tremendously every year,” Levin-Krok said in an interview at Fashion Industry Gallery. “I’m very influenced by making things I feel are going to sell. I think that’s more important than putting out pieces that are just about image. At the end of the day, it has to retail.”

The diffusion collection, called PII, is intended to extend the brand to a wider customer base. It features best-selling silhouettes from the main collection in lower-priced fabrics, including cotton twill, French terry, polyester jersey, wool gabardine and leather.

While the main collection wholesales from $44 for a tank to $400 for a leather jacket, PII starts at $25 for a garment-dyed T-shirt and rises to $110 for a cropped leather jacket with Swarovski crystals and $200 for a detailed coat. Styles include a striped wrap blouse with lace insets, corduroy pants with stitch detailing and sweats.

“It broadens our offerings,” Levin-Krok explained. “It’s more casual and a lower price point but has the same integrity. I put it out as a surprise. It’s having an unbelievable response.”

Diane Levin, chief executive officer and Levin-Krok’s sister, forecasts that PII will do $3 million in wholesale volume in its first year.

The sisters started the business in 1990 as a vehicle to help Levin-Krok move to the U.S. from their native South Africa. Levin, an attorney, was already living in Los Angeles.

Levin-Krok had worked as a clothing sales rep and managed her own fashion stores in South Africa and wanted to try design, her degrees in law and industrial psychology notwithstanding.

“It was very intimidating,” Levin-Krok recalled. “People wouldn’t even tell us where to buy poly bags. I had to get them from a dry cleaner.”

“When you start a new company, you just hope to survive,” Levin said.

They started with bodysuits that were snapped up by Saks Fifth Avenue. The company has since become known for forward sportswear and dresses with raw edges.

“People really come to us for fashion,” said design director Steve Sanchez. “There’s a lot of detail in each piece and you can dress it up or dress it down.”

The sisters first called the company Tokai after a small town in South Africa, but a lawsuit from manufacturer Kookai forced them to change the name. Levin-Krok came up with the brand name Poleci in 1994 as a twist on the word policy. The unusual spelling was designed to avoid possible conflict with similar names, but it led to a variety of pronunciations of the name — especially “poletchi” and “poleechi” — all of which the sisters have learned to respond to.

Poleci now has more than 600 accounts worldwide, distributing across Europe as well as Japan and in Dubai. Key accounts include Fred Segal in Santa Monica, Calif., Elements here, Harvey Nichols in London and Villa Moda in Dubai. Levin projected sales would increase 15 to 20 percent this year.

The company opened a store in New York’s Meatpacking District last October and has a five-year-old store on Robertson Boulevard in Los Angeles.