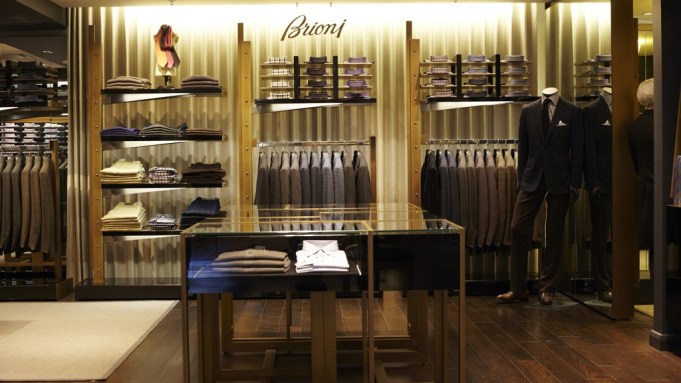 The Mitchells Family of Stores is ready to unveil the new Wilkes Bashford.

The Westport, Conn.-based retailer, which purchased the ailing Bay Area store in 2009, has completed a yearlong, multimillion-dollar renovation at the seven-level town house on Sutter Street in San Francisco that the 46-year-old Wilkes Bashford has called home for 28 years. The reopening party tonight is expected to draw, among many others, two of the city’s mayors — current officeholder Ed Lee and the former one, Willie Brown — to nosh on gourmet Italian food, listen to the tunes of the group SF Jazz and check out the completely transformed 23,000-square-foot location.

“It was, in all senses of the words, a gut job,” said Tyler Mitchell, who moved to San Francisco three years ago to lead the Mitchell family’s efforts to reinvigorate the retailer. “Literally, every fixture, every ceiling, every light is new. We started from scratch with everything. Even the bathrooms are new and in new locations. There is really nothing that remains as it was.”

As a result of the revamps, the San Francisco store picked up 30 percent more retail space and the Palo Alto unit added 20 percent more. The Palo Alto store added in-store shops from Brioni, Zegna and Kiton for men, and Brunello Cucinelli for men and women. The San Francisco store expanded space dedicated to women’s merchandise, including jewelry, by roughly 50 percent.

To Mitchell, some of the highlights of the renovations at the San Francisco location are a large staircase greeting customers on the first floor, a high-speed elevator at the side, rather than the center, and windows that allow natural light to illuminate its floors. In Palo Alto, old, cumbersome fixtures in the middle of the store were torn down to create an airier environment and more room for merchandise.

Although the event tonight is called a grand reopening, Wilkes Bashford actually remained open throughout the renovations. Mitchell was charged with the difficult task of coordinating operations during the renovations, which started at the top of the San Francisco store and went down. During the two months that the first floor was being redone, a red carpet was rolled out on the sidewalk in front and staff members from the men’s and women’s departments were outside informing people walking by that the store wasn’t closed.

“Managing the renovation from a sales point of view was a huge accomplishment, and I think we did a pretty darn good job,” he said. “We kept the growth going. We were comping in the double digits in a period where we didn’t even look like we were in business. That, to me, was a huge victory.”

The Mitchells Family of Stores is confident that Wilkes Bashford’s momentum will continue. “We are through our third year as owners of the business. It has grown by over 60 percent since we took it over. We strongly believe, with these renovations, that we can conservatively double the business in five years, and aggressively we think in three years we could double the business between the two locations,” said Bob Mitchell, copresident of the corporation.

He wouldn’t divulge Wilkes Bashford’s revenues, but did reveal they were 22 percent of the company’s total volume and could reach 30 to 35 percent with the expected sales increases.

Women’s will certainly play a big role in Wilkes Bashford’s future growth. Accounting for about 40 percent of its current sales in San Francisco and closer to 50 percent in Palo Alto, Bob Mitchell said half of Wilkes Bashford’s business could be from women’s in the years to come. He noted bringing in brands such as Alexander McQueen and Belstaff is going to elevate the women’s business. Moreover, the availability of jewelry from the likes of Kimberly McDonald, Kwiat and Oscar Heyman, and shoes by the likes of Manolo Blahnik and Jimmy Choo, is attracting female accessories shoppers.

“Wilkes Bashford is a man. It’s a man’s name. It has been known as a men’s store, but we are putting a huge focus on women’s. We anticipate that women’s is going to explode,” said Tyler Mitchell. “We have made the store feel really luxurious, and we think that women would feel proud to say they shop there.”

In both men’s and women’s, Bob and Tyler Mitchell are resolute that Wilkes Bashford can appeal to younger customers. Tyler Mitchell pointed to the introduction of Lanvin, Isaia and Rag & Bone for men as important milestones in helping the retailer resonate with younger men. “When we launched Isaia about a month ago in the store, I had 70 guys my age all come in and shop,” said the 33-year-old Tyler Mitchell. “Wilkes Bashford looked at me and said, ‘I cannot believe you rounded up all these young guys to come in. The store has been reborn.’ The young male doesn’t see Wilkes Bashford as his father’s store. It has been a little slower with women in my generation, but we are going to get there.”