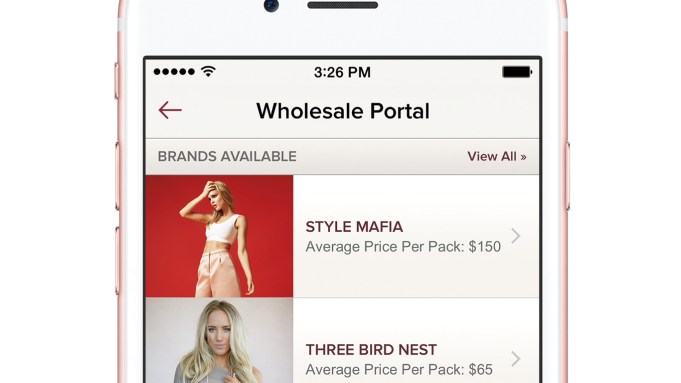 Social selling app Poshmark is making a move that puts it at the forefront of the trend toward mobile shopping.

Today, the peer-to-peer platform introduces an expansion into retail, meaning that in addition to enabling sellers to resell items from their closets, it will connect wholesalers with Poshmark members, who can then sell the items at retail.

According to founder and chief executive officer Manish Chandra, this launch is both a response to what some sellers had already been independently doing, and part of Poshmark’s vision of enabling mobile micro-entrepreneurs.

Poshmark has created a “wholesale portal” accessible to qualified sellers, who can buy “PoshPacks” of merchandise in the form of, for example, a range of sizes in one style or an assortment of coordinating jewelry. Chandra estimates that about 200,000 of the one million or more Poshmark sellers will qualify initially. (To qualify, Poshmark sellers must have 10 or more sales on the platform, a customer service rating of at least 4.5 and must complete an in-app retail certification.)

Poshmark will take “a very small” commission of the wholesale items, in addition to the standard 20 percent it gets from the sales in its marketplace. And just like in a traditional store, the Poshmark retail sellers choose the price of the inventory.

When a seller purchases an item from a wholesale seller, the Poshmark seller holds the inventory and ships it when it is sold to a customer, as is customary through existing Poshmark sales. The Poshmark platform facilitates the logistics and payments. To begin, it has partnered with more than a dozen smaller and more established independent brands, including Snob Essentials, Style Mafia and Lia Larrea, from inexpensive on-trend pieces to more luxurious items at $400, said Poshmark cofounder Tracy Sun.

“This is a staggering new channel for the fashion brands,” Chandra said. “Today, they have to go to showrooms, trade shows, connect with boutiques, host trunk shows.” He said the initial reception from brands has been positive, as many brand managers are either using Poshmark or know someone who is, and are eager to latch on to this potential new salesforce. “The access to a mobile selling shopping community for physical retailers is flat-lining, and we found that many of them are looking for new channels. This doesn’t force them to do anything more than they are doing.”

“We are always looking to increase the exposure of our a bags to a new audience,” said Snob Essentials’ Kelly Cook. “Their unique retail platform has the personalized experience we always want for our bags — each seller has their own personality and style.”

From the seller’s side, this is an easy alternate to creating a traditional boutique, without limits tied to a physical location. “They don’t need to pay rent or have hours or a storefront,” Sun said. “They can run the business on their phone.” She said that Poshmark sellers include a range of ages, from 21-year-olds making six figures to moms who sell on the platform as a part-time job, and most sellers have no fashion experience. “What we’re doing,” Sun said of today’s announcement, “is officially supporting what has already been happening.”

To encourage the shift toward using Poshmark’s wholesale portal, it will offer a “Fashion Entrepreneurs Fund” in the form of $500 grants to 50 sellers, who will be chosen by a panel of Poshmark judges “based on the most compelling vision for their retail stores in the platform.”

Poshmark launched in December of 2011 as a mobile-only app, and expanded with a Web site two years later. It focuses heavily on connecting its community with in-person “Posh parties,” but maintains that up to 95 percent of sales are mobile.

As attention on social commerce and mobile shopping are on the rise, Poshmark is poised to be at the intersection of a new type of “virtual” boutique. In April, the Menlo Park, CA, company raised $25 million in Series C funding led by Mayfield, Menlo Ventures, INventus Capital, Union Grove Venture Partners, Shea Ventures and SoftTech VC.