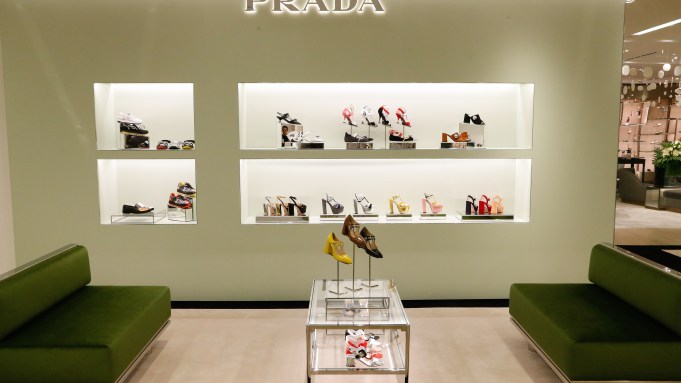 NEW YORK — Saks Fifth Avenue’s romance with footwear deepened Monday with the opening of a shop just for Prada at the flagship here.

Saks is one of Prada’s largest wholesale accounts in North America for women’s shoes — in no small part due to the store’s innovative 10022-Shoe concept launched in 2007 — but decided to bolster the business with a 700-square-foot shop on the eighth floor of its Manhattan flagship.

Prada officials said its Saks shoe shop reflects a strategy to strengthen its presence in “prestigious retail locations.”  At the Saks flagship, undergoing a $250 million overhaul, the two companies are discussing the possibility of offering Prada ready-to-wear, which has been a big hole in the merchandising. The new Prada shoe shop won’t hurt the cause. A Prada official at the shoe shop opening Monday declined to comment on the status of the rtw talks.

Previously, Prada footwear at the Saks flagship was set alongside other designer brands in a central part of the 10022-Shoe floor on the eighth level, making for a rather undistinguished presentation. Now with its own shop, Prada stands out with large signing, signature green walls and display niches, beige carpeting, steel and crystal tables, and velvet sofas.

It’s further differentiated by Prada’s made-to-order décolleté program, which is an exclusive in North America until April 10. Nineteen styles, including dècolletè and open toe, with and without plateau soles, are available on seven different heel heights, five types of soles and in 92 materials, prints and colors, creating more than 8,000 possible variations. The selection of materials includes brushed and metallic calfskin, leopard-print pony, python, Ayers, ostrich, crocodile and Saffiano Vernice amongst the fine leathers. Colors include classic and seasonal shades. The packaging comes in prints that match the shoes or in Prada’s classic blue box. The shoes are delivered in about 60 days from the order.

Among the other exclusives at Saks, Prada’s micro sole sneaker is offered in a range of special bright colors; chunky platform sandals also come in special colors just for Saks, and the 85-millimeter décollecté pump is offered in exclusive prints.  Prada’s lip print, introduced for spring 2000, and the Tulipano and Ottagon prints from fall 2003, are represented in the exclusives group. The made-to-order décollecté soles are offered in various colors, five styles, which can be initialized in gold or silver-colored metal.

Prada will have further opportunities to grow its shoe business with Saks. The first freestanding Saks Fifth Avenue shoe store, modeled after the 10022-Shoe department, will open in Greenwich, Conn., in fall 2016.