MILAN — In line with its new retail strategy, the Prada group is unveiling singular Prada and Miu Miu store concepts in luxury beach resorts such as Porto Cervo, on the Emerald Coast of the island of Sardinia.

In reporting 2016 results earlier this week, Prada SpA chief executive officer Patrizio Bertelli revealed the group has been shifting investments from store openings to renovations and working on giving the units “a new identity” and a “more exciting” customer experience to engage customers.

Illustrating the concept, Prada women’s and men’s stores in Porto Cervo’s Promenade, which opens for the summer season starting from Easter, feature the brand’s signature black and white marble floors and green fabric walls combined with natural materials such as teak wood. A coffered ceiling is revisited with a modern take in white and yellow. Original and imaginative prints are on the walls, reinterpreting elements of Prada’s collections, and add a colorful touch in sync with the resort’s holiday mood.

The stores have a sophisticated bazaar-like atmosphere and rare design pieces, including wicker armchairs on tubular structures from the Fifties as well as rattan armchairs by Franco Albini. The women’s boutique covers 1,836 square feet and the natural light is filtered by wide windows and wooden blinds, while the men’s unit spans over 1,080 square feet and features a skylight. In addition to the brand’s ready-to-wear, accessories and shoes, the units carry a selection of special, site-specific products. 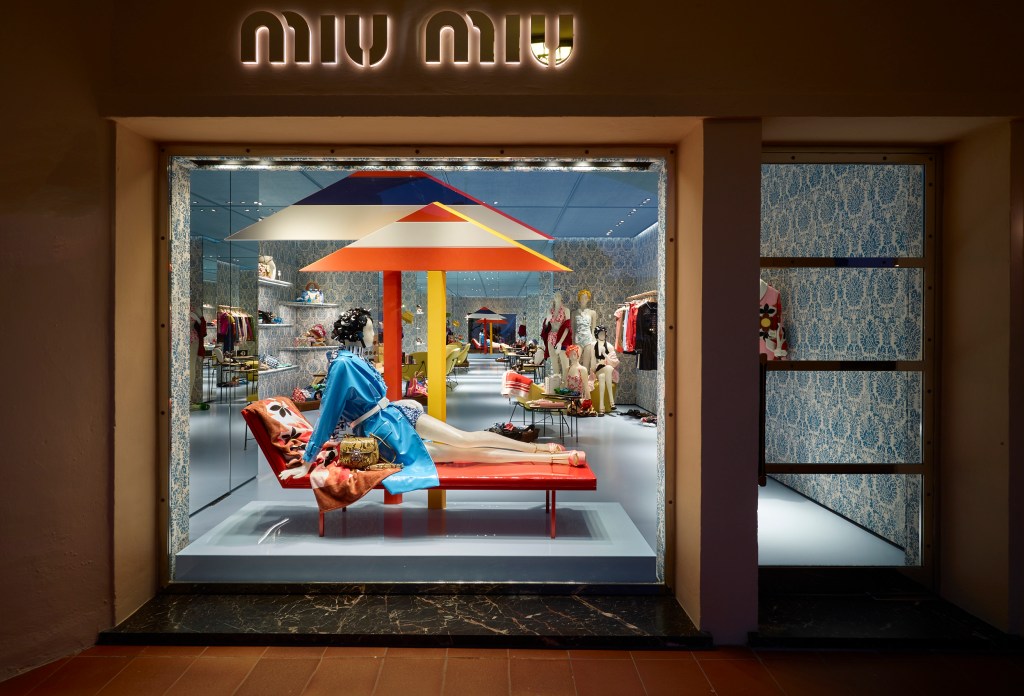 The paneled ceiling is covered in jute painted in azure and the cement floors come in the same hue. Tables in natural olive tree wood and black iron contrast with seats and armchairs in yellow fabric.

The group has also opened seasonal men’s and women’s Prada stores as well as Miu Miu units in Forte dei Marmi, Tuscany and in Capri.

The initial example of the company’s new retail strategy was revealed in November with Prada’s first store on the promenade of Saint Barthélemy, in the Caribbean, to consolidate its presence in Central American markets.

Covering 2,160 square feet on one floor, the location is differentiated by an original design with an exotic vibe, inspired by the architecture of Fifties South American mansions.

In the fiscal year ended Jan. 31, the Prada group opened 28 stores and closed 26 units, renovating 40 locations. The company has earmarked 50 stores for renovation in 2017.

At the end of January, there were 620 directly operated stores. Speaking last week about a store opening in Brussels, Bertelli said the company is working on giving it “a new identity.” These new-era stores “should be designed for new consumers, who have a different approach as they are now used to looking at everything [digitally] without being seen. Before, you had to walk in stores and talk to sales associates. This means retail stores need to have incentives and look more exciting.”

Bertelli said the company had seen an improvement in retail in December and January. Like-for-like sales were “positive enough” in February and March, he said.

In the year, the retail channel was down 14 percent to 2.63 billion euros, or $2.9 billion, but the company saw a progressive improvement in the trend in the second half, especially in the last quarter.