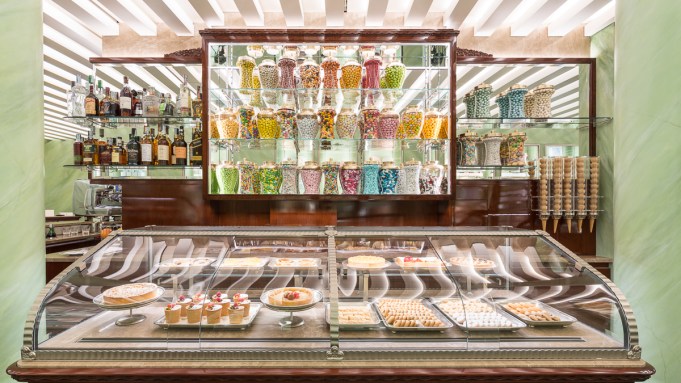 MILAN — Shopping is sweeter now on Via Montenapoleone — care of the Prada group, which opens the doors of its Pasticceria Marchesi on the luxury street today. This is the first unit for the historical pastry shop since the original landmark venue was founded in 1824 in Milan’s Corso Magenta district and the first since Prada became a majority shareholder with an 80 percent stake in March 2014.

Angelo Marchesi, great-grandson of the founder and chief executive officer, admitted it made “a certain impression to see one’s name” on a storefront on tony Via Montenapoleone. “It’s the first time that we leave our historical location, which has not been changed [since the acquisition]. Prada is even more committed than we are to keeping our heritage,” said Marchesi during a preview Tuesday.

Stefano Cantino, group marketing, communication and commercial development director, said Marchesi allowed the Prada group to achieve “credibility in developing the food [category],” in line with plans to open a Marchesi outpost in the new Prada flagship in Milan’s Galleria Vittorio Emanuele II, where its Fondazione will also have an exhibition space and which is expected to open next year. “This was a great opportunity,” said Cantino of the Via Montenapoleone space. He noted there are plans to open Marchesi shops in Hong Kong and another unit in Asia; one in the Middle East, either in Dubai or Qatar, and one in Japan. “It will be gradual, we don’t want licenses or franchisees. We’ll test results and create a structure. Montenapoleone 9 is a new company dedicated to this store.”

Cantino declined to provide financial figures related to the investment or expected revenues.

“We are certain that customers have such a broad vision of the concept of luxury and well-being that we can start a development strategy for such an important flag of Milan’s pastry scene,” the group’s chief executive officer Patrizio Bertelli last year, adding that food is also an important category when it comes to engaging younger generations.

Marchesi said he accepted Prada’s offer because the group offered “the idea of continuity. That was the first priority as part of the development.”

The new store has some common elements with the original venue, but Prada tapped longtime go-to architect Roberto Baciocchi to design its blueprint.

Aqua green marble walls in the entryway of the 1,296-square-foot store and a series of niches unfold a plethora of chocolates and sweets in their new elegant packaging. While a link with the first Marchesi shop, the central marble-topped bar with cherry wood and glass cabinets; the mirror-backed shelf with apéritifs, and the pastry display cases with curved glass hinge-tops are revisited in a contemporary way. Dark brown marble covers the floors, contrasting with light beamed ceilings.

Marble topped tables and soft green velvet armchairs and sofas are the main elements of two seating rooms. A green floral jacquard silk wallpaper is a standout in the store, juxtaposed with marble walls.

The new menu, conceived for this location, is served on fine china custom-made by Rosenthal, with custom Sambonet sterling silvery cutlery.

Marchesi has expanded the offer of its pastries, cakes, croissants and chocolates with new products, ranging from jams to chestnut candied in syrup or bite-sized dragées, displayed in 38 niches, strategically lit, with clear crystal shelves, and on the cherry wood counters.

All pastries are freshly baked daily in a kitchen at the location. It is understood Miuccia Prada and Bertelli were actively involved in all the stylistic choices, from packaging and design to the products. “Quality is a must for them and they prompted us to be even more selective in the purity of ingredients,” Marchesi said. Angelo Marchesi’s wife, Maria Rita, will continue to create her original thematic windows, almost artistic installations, with products dedicated to specific occasions, he said.

The store stands in a former Venini glass boutique, almost opposite the historical Cova pastry shop.

The unit is open from 7.30 a.m. to 9 p.m. serving from breakfast and lunch to apéritifs and is open all week, including Sunday — a must for Bertelli, who often lamented the fact that Cova was traditionally closed that day. Prada had tried to buy Cova, which eventually passed into the hands of LVMH Moët Hennessy Louis Vuitton in June 2013.