The season known most often in men’s wear as pre-spring is increasingly becoming a major cash generator for high-end retailers. 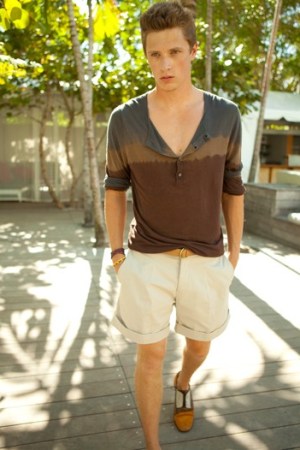 Resort, early spring, pre-collection — the description may vary, but one thing is clear: The season known most often in men’s wear as pre-spring is increasingly becoming a major cash generator for high-end retailers.

When these items hit stores right before holiday, they provide needed pop on the selling floor and give merchants an opportunity to sell fresh goods at full price during a heightened promotional period. Whether bought as gifts or by men shopping for themselves, pre-spring goods often are scooped up by shoppers seeking something new and different that hasn’t yet been picked over. “When was the last time you heard a shopper come in and ask, ‘What’s old?’” said one retailer.

Pre-spring collections serve a multitude of purposes. In a fast-fashion era of Zara and H&M, pre-spring appeals to the male consumers’ propensity to shop more often. The collections also address the need for lighter-weight goods at stores located in warm-weather regions. And they remain at full price all during the post-holiday clearance period.

True “resort” merchandise — swimwear, T-shirts and shorts designed for vacationers — is a small business in men’s and pales in comparison with pre-spring goods.

In fact, retailers said pre-spring has become so important that, depending on vendor and category, it can account for 30 to 60 percent of their budgets for the season.

As a result, designer brands ranging from Gucci, Armani and Dolce & Gabbana to luxury labels such as Ermenegildo Zegna and Loro Piana have come to embrace pre-spring collections over the last several years for providing significant add-on business. Although it requires more work in the design studio, the payoff on the bottom line is significant enough to warrant the extra work.

Pre-spring is “extremely important in men’s wear,” said Russ Patrick, senior vice president and general merchandise manager of men’s wear for Neiman Marcus. Over the past 10 years, the Dallas-based retailer has worked hard to encourage designers it carries to offer an extra delivery that hits stores in November.

“It’s really helped our business to work with the designers to deliver before Thanksgiving,” he said. This product “has a very long selling period at regular price. In many cases, from an open-to-buy point of view, it’s an even more important season than spring.”

This delivery, which offers a “wear-now” option in “more of a spring palette,” allows the store to offer fresh goods for holiday gifts as well as merchandise that can be worn on vacation, he said.

“The real growth is in transitional year-round weights in a spring palette,” Patrick said. “They’re in colorations that don’t feel like fall and can be worn through spring.”

These goods remain on the floor until the first spring deliveries, he said, noting: “When a customer comes to Neiman Marcus in March and sees it, it still makes sense at regular price.”

He said it’s not only designers who are offering pre-spring, but luxury and gentlemen’s brands, too. “It’s also exciting for our associates because they can tell customers this just came in — and they still have full-size runs.”

“Third-quarter deliveries are too heavy, so intermediate weights for the fourth quarter are a positive,” he said. “Pre-spring gives up the opportunity to start the season with lighter-weight product. Our customer thrives on ‘new,’ so he’s attracted by full-size runs, lighter colors and weights. The earlier deliveries improve our sell-throughs on a longer window of selling.”

During the holidays, Kalenderian said, traffic in the stores is at its peak, “so the visibility of this product is better and it turns in a shorter time.”

Despite the growing importance of pre-spring, not every designer brand, particularly those based in Europe, has the ability to produce and ship more frequently.

“Not every designer has the infrastructure to do an extra delivery,” Kalenderian said. “Most do, but it’s been a slow process to convince them, especially those in Italy. It’s more effort for the designer, but it’s worth it.” He said, however, that Barneys’ top 20 men’s brands offer pre-spring and that the store also ensures its own private label merchandise is available during this period, as well. “It’s a significant delivery for the Barneys New York label,” he said.

On the branded end, one company excels at fulfilling the demand for pre-spring, according to the retailers. “Zegna is terrific at it,” Kalenderian said.

He noted pre-spring works best in sportswear, followed by furnishings and accessories. But even in clothing, pre-spring deliveries are “valuable due to the weight issue. And it’s important to have clothing on the floor because once we go on sale, the sizes are broken and a customer might come in looking for clearance and wind up buying [pre-spring] at full price.”

Margaret Spaniolo, senior vice president and gmm of men’s for Bergdorf Goodman, is another big fan of pre-spring. “It’s a great shot in the arm to get a new delivery at this time of the year,” she said. “It’s brand new, it’s at full price and that gives it a longer period of time to sell.”

At Bergdorf’s, Loro Piana and Cucinelli are among the strongest players in pre-spring collections. Less-beefy cashmere sweaters, sport coats and outerwear from companies such as these, she said, are the most successful and appeal to the wear-now mentality of the male consumer.

However, some designer labels have yet to jump on board.

“Tom Ford doesn’t deliver until January or even February sometimes,” Spaniolo said. And Michael Bastian and Thom Browne have yet to offer a pre-spring package. “We’re pushing them to get the goods in early so we can help them grow and expand their business,” she said. “There’s never more people in the stores than December.”

Tom Ott, senior vice president and gmm of men’s for Saks Fifth Avenue, said pre-spring is “gaining importance” at his store. The lighter-weight goods appeal to the company’s stores in the southern U.S. and the West Coast, and vacationers will pick up a piece or two, as well. “That business is quite good now for our customers traveling to warmer climates,” he said.

Like other high-end retailers, Saks tries to bring in as much pre-spring as possible to capitalize on the holiday shopping frenzy. “There’s so much traffic at this time of the year and men are actually in the store, so we can really capitalize on that when they see great, new merchandise on the floor,” Ott said.

Pre-spring, he added, “is definitely a growth strategy for us, especially with our own Saks Fifth Avenue Men’s Collection product.”

Kevin Harter, vice president and men’s fashion director at Bloomingdale’s, said the store has not embraced pre-spring as much as some of its competitors.

“We’re in a wear-now moment, so resort is not as important as in seasons past,” he said. Although some merchandise, such as Vilebrequin swimwear or Zegna Sport sportswear is performing well, “it’s a small, niche piece of the business. Our outerwear business is terrific and we’ll sell that through the end of February. And our cold-weather businesses are great. Today’s consumer is really looking for wear-now merchandise.”