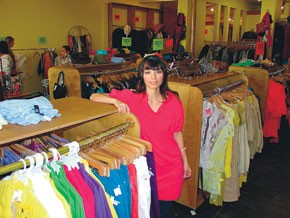 This story first appeared in the February 12, 2008 issue of WWD. Subscribe Today.

Price points, color and the inevitable scorching months ahead are some of the issues on the minds of retailers from New Orleans as they head to WWDMAGIC. With the spring and summer months looming, most are prepping for what they call their “hot” selling season, referring to the temperatures as much as the brisk volume of sales. Still, as they voice concern over strained budgets and vendors’ deliveries, few of the owners — from small shops in the historic French Quarter to the trendy boutique-lined Magazine Street — plan to commit their buying dollars too far out into the fall.

Hemline’s Bridget Holthausen has a boutique in each locale, along with nine others that she has franchised to owners in other parts of the city and state, as well as three in Texas and one in Nashville.

She shops for 70 percent of all the stores’ merchandise, and leaves some purchases customized for serendipitous discoveries — “‘Oh, this is so Texas,’ I’ll say to myself. Or ‘This is more Nashville,'” she said, describing her system.

Fresh from a buying trip to Dallas where she goes four to six times a year, she is hunting WWDMAGIC for new lines with good prices for the stores. “MAGIC seems to be the show for that,” she said.

Her 2,000-square-foot French Quarter store requires slightly more edgy merchandise than the 1,500-square-foot Magazine Street store, where merchandise has a more classic profile. Overall, however, loose cotton dresses will catch Holthausen’s eye because that category represents about 60 percent of sales. Dresses currently range in price from $80 to $150 for a casual dress from Three People or Karlie to $300 to $1,000 for eveningwear from Nicole Miller, BCBG, Yona Baraschi or Marc Bauer.

But she also wants to pick up a few new denim lines to augment the six to eight she already carries. “Denim for us is improving,” she said, noting that the category is climbing to represent about 20 percent of sales.

With a keen eye on the budget and the range of stores she has to stock with merchandise, Holthausen typically allocates a two-day spree at WWDMAGIC, where she has trained herself to sprint among the new lines. “I don’t like to spend much more time at any one show,” she said. “I’m afraid of getting tired and fear buying too much of the same look.”

At Hemline, a storewide drop in sales by 20 to 30 percent “was a little scary,” she said, attributing it to the recent blustery weather challenges throughout the Southeast and the economic speculation gripping the country. “January is always below expectations — and it gets worse when it’s cold and wet,” she said. “But we believe it’ll warm up in the next few weeks and we’re expecting a great spring and summer.”

Competition is stiff both on Magazine Street and in the French Quarter — where tourists and locals represent equal parts of clientele. At Red Lantern, Michael Marryshow’s 1,000-square-foot shop features women’s wear to men’s wear at a 65 to 35 percent ratio. He declines to mention lines he carries or might be looking to acquire at the show for fear of tipping off any of the 10 to 15 boutiques he considers competition.

Still, as much as 65 percent of his merchandise comes from shopping The MAGIC Marketplace, he said, although he leavens the inventory with this own Reggae music-inspired line of printed cotton jackets, T-shirts and hats for both men and women.

Strict adherence to price points keeps him focused on his parameters, he said, conceding that he rarely deviates from a range of $29 for a fashion top to $135 for a winter coat or a better-priced dress. He has learned the hard way, he says, that $180 dresses take a while to sell. His priority buying list includes light tops, miniskirts and color, color and more color. “Anything that’s color,” he said, ticking off his must haves: kelly green, yellow and pink.

Color is also on the agenda for Winky’s Noel Barras, a veteran of 13 years on Magazine Street, who keeps a firm grip on merchandizing the 1,200-square-foot store. Women’s wear accounts for 50 percent of sales, and children’s and men’s for 30 percent and 20 percent, respectively. She branched into baby clothes seven years ago when her son was born and she could not find clothes other than those with cartoon characters.

To satiate her female customers — ages 12 to 50 — she stays tuned to price points ranging from $60 for a Jessica Louise top to dresses at $84 for a Paper Doll dress and $100 for Easy Star. Aside from dresses, however, Barras will be searching for peg-leg shorts in pinstripe or seersucker to replace skirts that have not be selling for two seasons.

“What I look for is hard to describe even though I consider my customers not so much trendy as individual,” she said. “If someone says metallic or skulls are trends, I probably won’t buy that. I guess I’m kind of anti-fashion — I don’t consider myself in the ‘fashion’ business. We’re more individual than that.”

Barras is concentrating on price points more than ever — “because I think customers will be looking at price points this spring and summer, what with the economy as uncertain as it seems to be,” she said. “Price is a plus for those who shop here — they know they don’t have to break the bank to get something cute.”

Since money is tight, she plans to adjust her spending patterns. “I just can’t tie up money on clothes that will not be made or that won’t ship on time,” she said. “My new resolution: Buy for immediate delivery. In New Orleans, our winter is so short that if an order is two weeks late, the opportunity has passed. In the past, I’d buy further out, but now I won’t buy for fall until August. I’m sure I’ll miss out on a few things, but I would rather know exactly what I’m getting — and when.”

The story is not much different down the street at Kalliopi Nicopoulos’ 2,000-square-foot Frock Candy, where light streams through huge plateglass windows overlooking a bustling Magazine Street with plenty of foot traffic. Nicopoulos’ track record of flat sales in 2007 compared with the year before has not dampened her optimism for a growth spurt this year — but it has strengthened her resolve to be a conservative buyer for her average customer in the 15-to-35 age bracket.

“I’m being extremely discriminating about what we order and adhering to delivery date,” she said of her on-site strategy for WWDMAGIC. “It’s always a good exercise, but this time I’m going to be more judicious about honing my buying skills.”

This month’s show is crucial for her — given she considers she has an eight-month spring-summer selling season ahead of her. Given that long spell and a short fall, she’s putting off buying out further than for late summer. “I’m only buying things I know will sell, what customers want and what may be still on trend six months down the road,” she said, adding that other years at this time she would be also looking at early fall.

And as other retailers have agreed, timing is crucial for Nicopoulos, too. “I’m going to be paying more attention and track delivery dates more carefully,” she said, still feeling the pinch of late deliveries last season. “We have great vendors and use the same ones again and again, but when I see them at MAGIC I’ll have to tell them that we can be flexible in delivery dates within a week or two — but not a month.” She’s also more rigid on tracking orders of merchandise that never arrive — which in turn can jeopardize her operation when she has to place new orders at the last minute.

While she has a weakness for new vendors with great merchandise at great prices, she admits that she’s drawn first to vendors “I know and trust — I know they’ll make allowances and deliver on time,” she said.

Among her best-selling vendors are jeans from Miss Me and Sound Girl and separates from Nick & Mo. But it’s dresses — representing 60 percent of her sales — that occupy her buying time the most at an average price of $60 — “at which point we don’t encounter any resistance.”

“I’ll be looking for more girly dresses with bubble, tent or Empire silhouettes,” she said. “But I also want to find dresses with drop waists and layered dresses with a flap anywhere — or everywhere.”

Like other retailers, she’s also banking on color — turquoise, peach-oranges and just about any bright color. “But I won’t be buying any black,” she said.

While retailers are heading full bore to WWDMAGIC with color-coded merchandise wish lists, they are also approaching it with some sobering business tactics after experiencing stagnant growth or sales declines. In response to a first-time drop in sales, Winky’s Barras sees this buying season as another milestone in her retailing career. “I’ve been in retail since I was 14. This season, I’m keeping it tighter, with my finger closer to the pulse. I don’t want any surprises.”

For her Hemline stores, Holthausen banks on sales volume increasing, but at lower price points for spring and summer merchandise. “It’s easy to sell in the beginning of the season, but by June, July and August, people have built their wardrobes — and we want them to want to buy something new despite that,” she said.