Macy's dives into the off-price sector — and adds some wrinkles of its own. 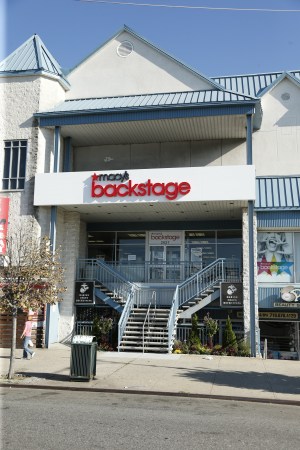 The off-price sector is mature and becoming more crowded by the day, but Macy’s is striving to get a piece of the pie with its new Macy’s Backstage format — which it claims is different.

“We are building a brand here — a sub-brand,” Peter Sachse, Macy’s chief innovation and business development officer, told WWD during a preview of the Backstage store in Sheepshead Bay, Brooklyn, which opened Thursday. “The young Millennial mom is the focus.”

“You are going to see themes throughout the store, curation, great value and a wide variety of product unexpected from Macy’s,” added Vanessa LeFebvre, senior vice president and general merchandise manager of Backstage.

According to the executives, the Backstage strategy is to capture that young mom with a “neat, efficient, fun and fashionable assortment” with clothes, home and food products for the family in a mix of brands that may or may not be sold at Macy’s. The idea is to encourage consumers to eventually graduate from shopping Macy’s Backstage to shopping Macy’s, just like Saks Off 5th sees its shoppers over time graduating to Saks Fifth Avenue. Backstage does offer some Macy’s private brand products, INC among them, which are in much greater supply at Macy’s and macys.com. If customers see INC at Backstage, they may want to shop more of INC at Macy’s. There are also travel-size fragrances at Backstage sold at Macy’s in the full-size versions.

Backstage discounts range from 20 to 80 percent off regular prices, and the vast majority of the merchandise is bought from the market. There are a smattering of clearance items and nothing is manufactured specifically for Backstage, though that could change in the future. Some of the merchandise, primarily cosmetics and Sunglass Hut, is full-priced, though Sunglass Hut does offer some clearance.

“We have been scouring the market, leveraging our relationships, making new ones, and being very opportunistic in our approach,” LeFebvre said.

Categories include sportswear, outerwear, furs, intimates, active, kids, jewelry, sunglasses, cosmetics, men’s, luggage and food. “It’s a wide sampling of product categories within a relatively small space compared to a Macy’s,” LeFebvre said. The Sheepshead Bay store is 30,000 square feet over two levels, and on the site of a former Loehmann’s location.

Macy’s moved fast to get Backstage up and running, and has the advantage of utilizing the department store chain’s existing infrastructure, including logistics, human resources, asset protection, creative and operations, though Backstage has its own merchandisers and planners.

“A year ago, Vanessa and I and other members of the Macy team debated whether Macy’s should be part of the off-price scene,” Sachse said. “We took about 60 days to look at the market. We did a deep dive.”

When consumers were asked where they stopped shopping to instead shop at T.J. Maxx or some other off-pricer, the number-one response was Macy’s. “We were donating [market] share to this burgeoning format,” Sachse observed.

The first Backstage leases were signed last April and currently six locations are set. Three opened for business this week, in Sheepshead Bay (2027 Emmons Avenue); Queens Place in Elmhurst, Queens, and in the Melville Mall in Huntington, Long Island.

Backstage will open in the Lake Success Shopping Center in New Hyde Park on Long Island on Sept. 9; at 400 East Fordham Road in The Bronx, N.Y. in mid-October, and in the Essex Green Shopping Center in West Orange, N.J., in the first week of November.

“Six were chosen purposely, so we could learn,” Sachse said.

Macy’s did learn some lessons back in the Eighties by launching Macy’s Clearance Outlets, which operated on a different business model that revolved around clearance. The company still operates furniture clearance centers around the country but none for fashion.

Macy’s long saw no need to operate off-price units because its department stores, becoming very price promotional, served the purpose. But the recent research indicating losing share to off-pricers like T.J. Maxx — as well as the off-price sector’s high level of profitability and Macy’s need to find new growth avenues — changed the thinking.

But Macy’s doesn’t want to be regarded as copycatting. During the preview of Backstage, Sachse and LeFebvre emphasized how the store differentiates from other off-pricers, singling out, among other features:

• 100- to 300-square-foot “center stage pads” and trend boards to spotlight trends or themes like fringe, distressed leathers, gray metallic pillows and “country life,” which run through much of the fashion and home-decor merchandising;

• Mobile point-of-sale checkouts so the shopping is faster and easier;

• A whimsical approach by playing off the Backstage name as a whimsical motif. Store managers are called “directors,” fitting rooms are designated “dressing rooms” and as Sachse said,  “Every associate is part of the stage crew” as the red T-shirts they all wear indicate;

• Fitting rooms with three-way mirrors, grids to hang clothes, and funny signs like “selfie-time” and “you look fabulous” to keep the mood light;

• A café called “Macy’s Taste Bar” at the Sheepshead Bay Backstage serving Starbucks, sandwiches and soup among other items on the menu;

• Movable fixturing so categories can be increased or downsized depending on sales trends.

Backstage will encourage repeat visits by having weekly deliveries of new merchandise. “This is the thrill of the hunt,” Sachse said. “We want this place to be fun, fresh and fashionable.”

“We are taking a My Macy’s approach,” said LeFebvre, referring to the chain’s localization program. Backstage stores on Long Island, for example, will offer a greater furniture assortment compared to Backstage in Sheepshead Bay. “We know the customer on Long Island is more likely to have an SUV.” LeFebvre said.

On the other hand, Sheepshead Bay has a robust fur salon in the front of the store to cater to Brooklyn’s large population of Russians, who are prone to buying furs.

“We know what works in what location. We are not going into this blind,” Sachse said, noting that data accumulated from Macy’s stores operating in Brooklyn and Long Island informed the buying for Backstage.

Still, “We are testing a lot of things. It’s not going to be perfect, but we want it to be agile and fast,” Sachse said. “We want to get in there and learn. Backstage is now in a pilot phase.”

If the initial wave of stores proves successful, additional real estate will be sought, typically existing, freestanding sites rather than malls that could have been vacated by another retailer. It’s also possible that Backstage takes over some underperforming Macy sites, as was the case in the Essex Green Shopping Center. “We will roll out Backstage rapidly,” Sachse said.

But Macy’s has an enormous amount of catching up to do, considering the $30 billion T.J. Maxx has 3,300 stores and just reported a strong second quarter, as did the $11 billion Ross Stores, with 1,259 Ross Dress for Less units. Nordstrom Rack is also performing well, with 178 stores at the end of the second quarter, while Saks Off 5th is accelerating its growth, too, with 90 seen operating by the end of the year in the U.S, and 20 openings planned for 2016.