Coming to America: The Primark Plan

Primark will launch its first U.S. on Sept. 10, a 77,300-square-foot location in the former Filene's building in Boston. 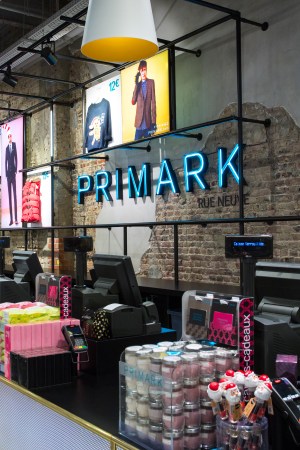 Watch out Old Navy, H&M and Forever 21. Primark, the low-priced, fast-fashion chain from Ireland that has expanded through Europe, is invading the U.S. and determined to grab a piece of retailing’s highly lucrative and fast-growing value sector.

All industry eyes will be on Boston on Sept. 10, when Primark makes its U.S. debut. The Boston opening will be followed by one in November in King of Prussia, Pa., then six others in 2016, in Burlington and Braintree, Mass; Freehold, N.J.; Willow Grove, Pa.;  Danbury, Conn., and Staten Island, N.Y.

“We’ve always felt confident about our ability to take Primark to new markets,” Paul Marchant, the chief executive officer of Primark, told WWD on Friday, in an exclusive interview about the U.S. strategy.

“The U.S. for a number of reasons feels like a natural fit for our brand. Boston is a great first move for us. The Irish connection we think is important. There is also a very large student population — we have a business that’s very popular with students — and the climate is similar to Europe, which is a way to ensure product mix is appropriate to the marketplace.” Primark, based in Dublin and owned by the Associated British Foods Plc conglomerate, targets shoppers under 35 years old.

It didn’t hurt that Primark landed some prime property — the former Filene’s flagship — in Boston’s Downtown Crossing district. “It’s an old historic building that’s very much part of Boston culture,” Marchant said. “One thing the customer will experience is how we truly embraced the history and essence of the building. We’ve restored many of the original features to bring the building back to its former glory,” including exposing the original brick work and terracotta ceilings. Boston is also where Primark has established its U.S. headquarters with a team of 20 including talent tapped from Target, Wal-Mart, H&M, Uniqlo and Forever 21. José Luis Martinez de Larramendi is president of Primark U.S.

At the entrance to the store, customers will first encounter Primark’s “trend room” with 1,000 square feet of the latest styles, then there’s “a small army of mannequins” for women’s fashions and “clear directional signs” navigating consumers through the selling space. There will also be many digital displays, which Marchant said provide a fresh contrast to the historic character of the building.

The Boston store sits at the corner of Summer and Washington Streets, and has four floors covering 77,300 square feet that are connected by escalators and glass elevators. There will also be 73 cash registers and 84 fitting rooms to keep the traffic flowing, and 530 mannequins and busts to encourage wardrobing.

“It feels like the ideal time to make this significant strategic move,” Marchant said, when asked about the timing. “We have a very strong business in Europe. We trade in nine countries.”

The company, which opened its first store in Dublin in 1969, was for decades slow to expand. It entered the U.K. in 1974, yet it wasn’t until 2006 that it opened its first store in continental Europe, in Spain. “Since then, we’ve been fairly aggressive,” Marchant said. Recently, Primark announced entering Italy with up to three stores, the first set for early summer 2016 in a new shopping center in Arese, northwest of Milan.

“Opening in the U.S. in no way restricts our plans for Europe,” Marchant noted.

Currently, the company operates 290 stores and 11 million square feet in nine countries and has 62,000 employees. Newer stores tend to average around 60,000 square feet, while the older generation of stores were in the 38,000-square-foot range on average. Category growth, Marchant noted, has encouraged the business to open larger units.

In the U.S., seven locations were attained through a deal with Sears Holdings enabling Primark to carve out space within Sears stores. Three are in Massachusetts, two are in Pennsylvania and one each in New York, New Jersey and Connecticut. The Boston store is leased from Millennium Partners.

“We think these eight stores will give us a very good indication of how the U.S. consumer will react to the Primark brand….As we trade in Downtown Crossing and King of Prussia before Christmas, hopefully we learn our lessons very quickly. We want to get the eight stores opened,  get through 2016, and make an assessment on our next move.

“We have always believed the proposition at Primark is a unique one.”

Marchant added that it’s possible Primark soon locks into another two locations in the U.S. “A couple more may surface over the forthcoming months. We are absolutely in research mode, looking at the total U.S. market to understand it as much as we can. But I wouldn’t expect to see any more significant surprises,” beyond the eight to 10.

Asked what type of locations Primark prefers, Marchant replied: “The only criteria we have in terms of locations is that they’re really good quality shopping environments where we are surrounded by our competitors. We want our competitors to be close. It attracts footfall.”

He said his company conducted extensive research into the U.S. market, and that the team visited more than 60 locations in the Northeast corridor alone.

In Europe, the ceo noted, there’s an equal mix of mall and high streets locations where Primark stores operate. In Spain, he said, the majority of the retail market is shopping malls as opposed to city sites, whereas in the U.K. and Ireland, there’s a greater propensity for retail brands to be on high streets. “It does vary by market.”

With eight stores, “We feel we need that level of scale to learn the lessons,” Marchant said. A leased, 650,000-square-foot distribution center in Bethlehem, Pa., will service Primark’s first wave of U.S. units and will be operated by a third party, Exel.

“Speed of reaction is very important to us,” Marchant said. “Each store will receive new deliveries every day.” He described the assortment as offering “high levels of newness” with 10 percent of the inventory changing every week. It’s a mix of fashion items, key basics and key wardrobe essentials. Primark’s collection is entirely private label with the exception of a very small amount of beauty products.

With its offering of men’s, women’s and kids’ clothing, accessories and footwear; cosmetics, gifts and home, Primark brings a consistent assortment to each market it operates in, though there are tweaks to the presentations, depending on location. “The majority of the product is consistent,” Marchant said. “The feel of the stores and product is pretty much the same everywhere, but we absolutely treat each store as an individual. Some markets will be more fashionable; some more casual…and we do develop some unique products for each market.” In the U.S., for example, the bedding is sized differently to adapt to smaller beds, Marchant said.

“We really believe that we need to let the consumers tell us what they want and that it’s our job to make quick adaptations.” In Boston, “we will learn more in about 10 hours of being in business than in three years,” of researching the market.

Ask what sets Primark apart from the competition, Marchant boasted about the fashion as well as “very sharp, very competitive prices and great service.” The ceo also said that Primark’s store environments that “far outweigh” what consumers would expect from a retailer with very low prices. “We have an incredible amount of merchandise sitting under the $10 mark,” Marchant said.

Marchant acknowledged the challenge will be to build name recognition in the U.S. “We have a fairly big job to raise the awareness. If you look at brand recognition in Europe, it’s huge. We are number one in terms of units of clothing, footwear and accessories combined in a number of the markets in which we trade. We are number one in the U.K., Ireland, Spain and Portugal.”

To build awareness, Primark launched its U.S. Web site Aug. 10, and has developed a marketing campaign commencing Sept. 1 across a number of mediums, including outdoor advertising at train stations and bus shelters in Boston and digital signage. Ads will showcase products and “amazing values,” Marchant said.

While Primark will be up against several big players entrenched in the value sector, “We are not overly focused on the competition,” Marchant contended. “We are obsessed with satisfying our customers. If you asked who is it that Primark mirrors the most, it’s H&M, Forever 21 and Old Navy. But it’s very important to say that we consider everyone to be a potential competitor.”