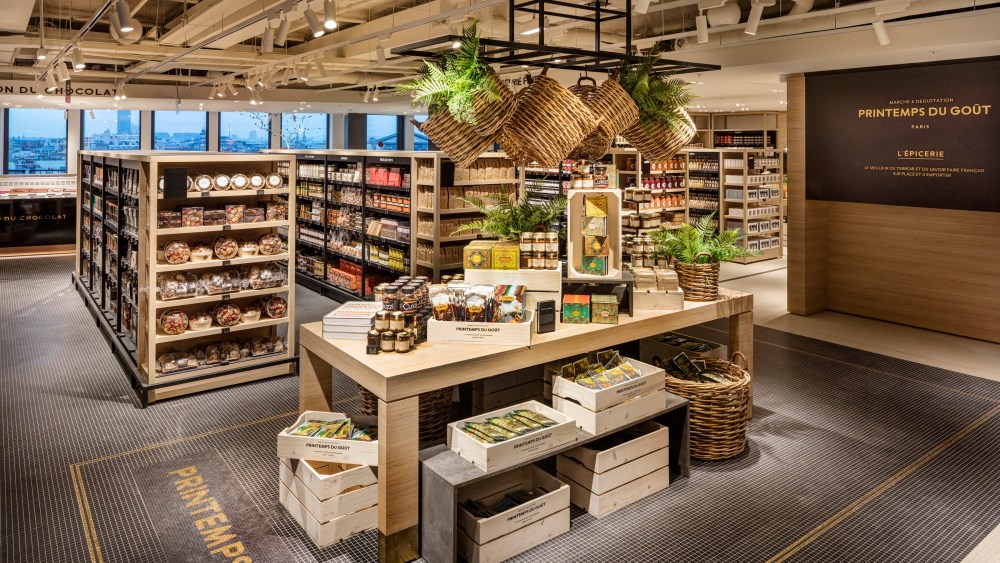 PARIS — French department store Printemps is putting the finishing touches to an ambitious cycle of renovations with the opening today of a brand new food court, the first of its kind for the 153-year-old retailer.

The Printemps du Goût is the crowning glory of its historic building at 64 Boulevard Haussmann, since unlike other department stores in Paris, it has chosen to house its gastronomic offer on the top floors, providing visitors with vistas spanning from the nearby Opera building to the Eiffel Tower.

“We don’t want the customer to see the street; we want them to see the roof and the view. This is something unique that only Printemps can offer,” Paolo de Cesare, president and chief executive officer of Printemps, told WWD over a breakfast of pastries from renowned baker Gontran Cherrier.

The latter is one of four chefs with dining facilities on the eighth floor of the flagship. Others include Christophe Michalak, crowned World Champion of Pastry in 2005; cheese maker Laurent Dubois, and Michelin-star chef Akrame Benallal, who is in charge of the fish, meat and fresh produce menu. 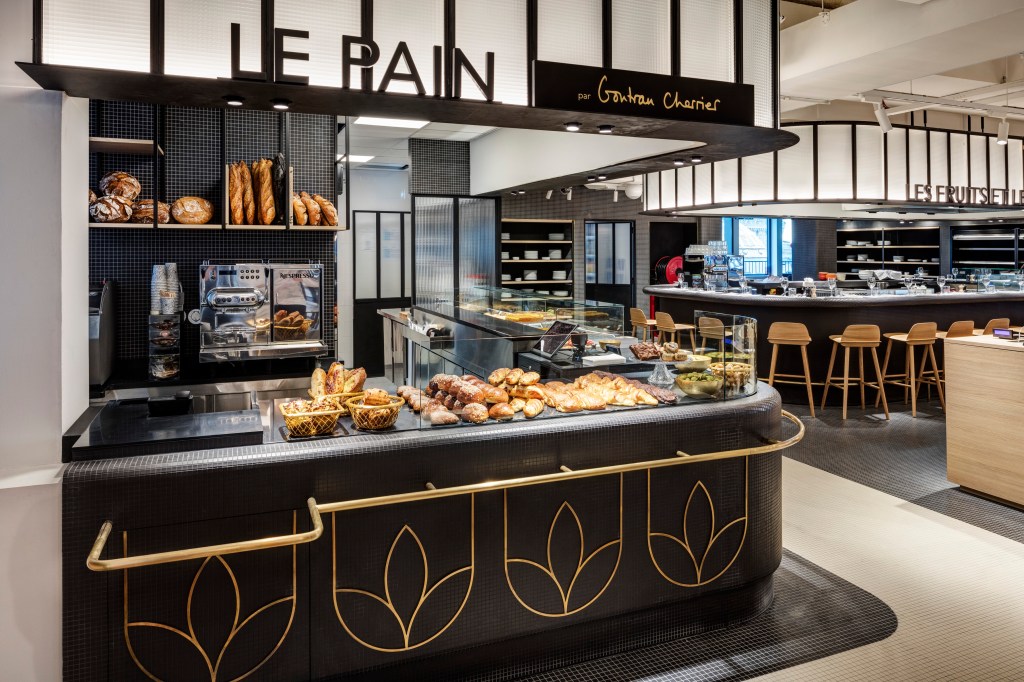 The seventh floor, meanwhile, is home to a gourmet grocery featuring 2,500 products including jam, biscuits, chocolate and honey, which is made on the premises. Many of these were previously available only to chefs, such as smoked salmon from Byzance, one of seven specialist brands with their own counters on the floor.

In addition to a gift department and book section, the floor is home to a wines and spirits store run by wine merchant Le Repaire de Bacchus. It features an original 19th-century wood-and-marble Champagne bar in the shape of a horseshoe, and a cellar storing fine wines, such as a 1990 Petrus that retails for 6,600 euros.

A window near the escalators provides a view of the store’s soaring atrium, featuring a giant curved wall known as “The Sail,” and glimpses of the five-floor men’s department, completed last year.

That sets Printemps apart from competitors like neighboring Galeries Lafayette, which unveiled its revamped Lafayette Maison and Gourmet store in 2014, and Le Bon Marché, which recently opened a second location for its La Grande Epicerie food emporium.

“The approach in Paris is that you do an annex, and you put food in the annex,” said de Cesare. “We want food at the core of our building.”

Printemps has decided to make the offer 100 percent French — down to the Bellevoye whiskey that comes with patriotic blue, white or red labels. “The three concepts of this were the product, the people and the place,” said de Cesare. “The idea is to do things that are very simple, where the product is the hero.”

Emmanuelle Touboul, head of food and beverage at the store, scoured the country for products made the traditional way.

“We wanted the selection to be made on the basis of taste alone, because that is what matters to us the most. We conducted blind tastings on 18,000 products and kept the best 2,500,” she explained. “We really want to be a showcase, an ambassador for French gastronomy and eating well.”

The store’s greengrocer, Joël Thiébault, insists on offering only seasonal produce. “There won’t be any tomatoes in winter at Printemps,” said Touboul. “It’s really only products that are in season. We are strict about this and there will be no exceptions.”

The Printemps du Goût aims to provide alternative dining options for businesspeople and tourists in an area dominated by traditional brasseries. Spread over 18,300 square feet, it has seating for around 230 people indoors and 70 outdoors.

In addition, Printemps plans to open a 220-seat rooftop restaurant in June, as well as a café on the ground floor, adjoining the men’s accessories hall.

The dining areas on the eighth floor feature globe pendant lights in a nod to the decor of the staff canteen that occupied the premises in the 19th century.

The interior design, by the retailer’s in-house architects, is both elegant and convivial, with traditional touches such as mosaic floors and wood furniture contrasting with a graphic black-and-white color scheme set off with yellow metal accents.

The Printemps du Goût, which replaces floors previously occupied by children’s wear and luggage, marks the final phase in the renovation of around half the store’s surface, with the transfer last year of the homewares and beauty departments to the former men’s store next door.

“In three years we will have renovated 20,000 square meters, invested about 100 million euros and created what we believe is the most iconic men’s building in the world, with the food offer, and an incredibly unique home and beauty building,” said de Cesare.

Like other bricks-and-mortar stores facing increased competition from e-commerce, Printemps is placing a growing emphasis on the shopping experience, as opposed to just selling products — though it also provides the option of ordering groceries online via the application Epicery.

The new department marks the latest addition to the French capital’s burgeoning food retail scene, with the planned opening this year of Eataly’s first flagship here, in partnership with Groupe Galeries Lafayette, and a second branch of gourmet grocery Maison Plisson in May.

“It’s a beautiful evolution for Paris. I think it creates […] another reason for international customers and tourists to come and discover Paris,” said de Cesare.

“It’s very nice that every concept is very different and in this sense, we have a very unique approach, very focused on the quality of the product, very focused on partnerships with unique chefs. We have a really distinctive reason for being and we will live very well with the other approaches. So it’s a case where the more, the better,” he added.

While the executive expects food to account for just 3 to 5 percent of revenues at the Haussmann store, he sees it representing 30 percent of customer tickets.

“It will bring huge traffic to the store and we know that this traffic will eventually convert into visits and purchases in the other sectors. So we are very bullish on the fact that with this renovation, Printemps is becoming a top destination for visitors — domestic and international — and is going to benefit from the increased traffic,” he predicted.

Business picked up in 2017 after a year marked by the aftermath of the series of terrorist attacks in France and elsewhere in Europe. Printemps, which is under Qatari ownership, expects to post growth of 5 to 6 percent in the fiscal year ending March 31 after a drop of 6.5 percent the previous year, de Cesare said.

The Haussmann flagship recorded 8 percent growth in the 2017 calendar year, despite the renovations that closed off large sections of the store, with a strong pick-up in local business fueled by an improving economy, a new in-store loyalty program and the renovated men’s and beauty departments, he noted.

“The traffic at Christmas with the local clientele has been nothing short of fabulous. The 10 days before Christmas, our traffic in the store grew 20 percent compared to last year, and we had on average everyday 80,000 people entering our store — so a performance that is absolutely a record,” he reported.

This compensated for a slight drop in revenues from Asian clients, which are growing in the low-single digits. This was due to a lower average ticket, resulting from Chinese government measures designed to curb spending overseas, de Cesare said.

Nonetheless, he was optimistic for 2018, forecasting mid to high-single-digit growth. “If the macroeconomic environment doesn’t change dramatically, this would be the plan. With the completion of all the works and the loyalty program we have, I think it is well within reach,” he said.