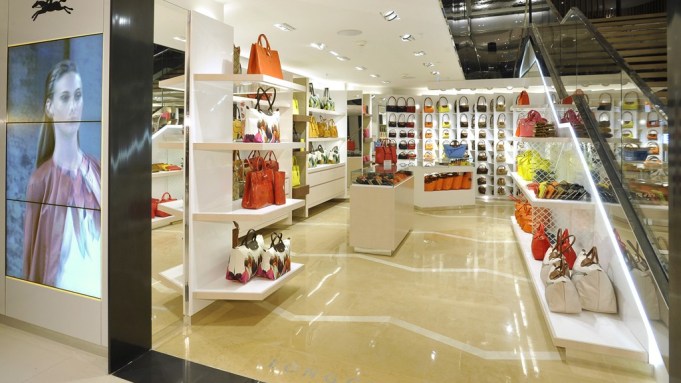 PARIS — Printemps is opening today its first new store in 32 years in the Carrousel du Louvre shopping mall in Paris.

The two-story unit located next to the entrance of the Louvre Museum offers designer leather goods, accessories and beauty on the ground floor, while a mezzanine hosts watch and jewelry brands, a luggage corner and services such as value-added tax refunds.

With just 27,000 square feet of retail space, it is considerably smaller than Printemps’ flagship on Boulevard Haussmann, which covers roughly 463,000 square feet, but chief executive officer Paolo de Cesare said the retailer has high hopes for the space, which sits across from Apple and was previously occupied by a Virgin Megastore.

“We are creating a new store concept, and we are doing it in a location that is incredibly iconic and gives us huge visibility with every tourist,” de Cesare told WWD. “Not all [of them] go to [Boulevard] Haussmann, but everyone goes to the Louvre.”

The museum drew 9.7 million visitors in 2012, the latest year for which figures are available. Printemps hopes that level of foot traffic will help the store generate revenues of between 20 million euros and 30 million euros, or $27 million to $41 million at current exchange, in its first 12 months.

It is the first large-scale project to see the light of day since the retailer was taken over last summer by Qatari investors via Luxembourg-based investment fund Divine Investments SA, or Disa. “That is an investment that shows the commitment of the Qataris to continue to develop the business and the image of Printemps,” said de Cesare.

The refit cost 25 million euros, or $34 million, and required 18 months of construction, as the existing store was expanded into previously unoccupied areas to create an extra floor.

Designed by architecture firm Antonio Citterio Patricia Viel and Partners, the unit features a large open entrance facing the inverted glass pyramid in the shopping mall. The store itself consists of a 20-foot-high rectangular space decked out in the same limestone as the Carrousel du Louvre and the museum itself.

“The architectural concept is openness — a bit like a room in a museum where you can go check out all the art pieces,” said de Cesare. “We wanted for the customer to come in and feel they can circulate freely in the space. We didn’t want to put any barriers.”

The offer is designed to represent the best in European luxury know-how, with the Printemps du Luxe section offering handbags by Salvatore Ferragamo, Stella McCartney, Chloé and Saint Laurent Paris. It is followed by individual units for Bottega Veneta, Givenchy, Prada, Coach, Burberry, Longchamp and MCM.

Over the next three months, that space is hosting “Pop the Bag,” a temporary exhibition of colorful, oversize works by contemporary artists around the theme of handbags.

“We felt it was a very important touch to make a statement that this is not just about selling products, but about entertaining,” de Cesare explained. “We will alternate exhibitions, products, novelties and demonstrations.”

Printemps expects 60 percent of customers to come from overseas, compared with an average of 40 percent at its Haussmann flagship — a proportion that rises to between 50 percent and 60 percent during the peak summer tourism months.

The group plans further openings in the harbor of Marseille this year and in Cagnes-sur-Mer on the French Riviera in 2015, and has set its sights beyond France.

“Clearly we are looking at opportunities for international openings, but we will do it in a very different way than others have,” said de Cesare, referring to rival Galeries Lafayette’s franchise agreements and partnerships with local retailers in countries including Indonesia and China.

The arrival of Printemps is part of wider efforts to revitalize the Carrousel du Louvre, which lies outside traditional Paris shopping circuits like the Champs-Élysées, the Marais and the Grands Boulevards.

“The fact that we are coming in is a clear reflection of this movement to make the area of the Louvre a much more interesting shopping area,” said de Cesare. “In the current economic environment, I think showing the courage to innovate in retail in France is a very significant step.”

Printemps expects to post continued growth in its 2013 fiscal year, which ends in March, though the executive indicated the holiday season was lackluster.

“It will not be as strong as 2012, which was a pretty good year, but still it’s a year of growth despite a very difficult market environment,” he said. “I would define the Christmas season as respectable, in the sense that we grew, but clearly it was subdued in terms of overall customer enthusiasm for shopping.”

De Cesare called on local authorities to take measures to make Paris a more attractive shopping destination, such as loosening the rules governing Sunday shopping and the hiring of temporary staffers.

“The fact that Paris [department stores are] closed on [Sundays] is really hurting commerce. And I think that is really a key, key point. I think the opening hours are also ridiculous — the fact that you cannot occasionally open later at night,” he said. “Clearly, there are a lot of steps that can be taken to encourage and favor retail.”