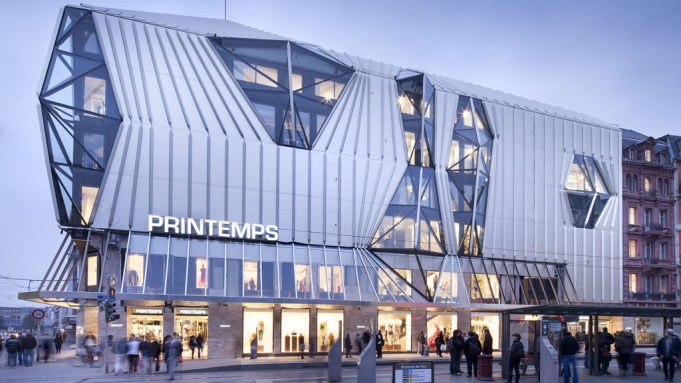 PARIS — It’s the dawning of a new expansion era at Printemps.

On track to become a 100 percent property of a group of Qatari investors by this summer, the French department store operator intends to become an even bigger, and more international, player on the retail scene.

“Our new investors are very committed to making Printemps an icon in luxury retailing,” said Printemps chairman and chief executive officer Paolo de Cesare, referring to the still unidentified group of Qataris who are poised to take over the company. Via the Luxembourg-based investment fund Disa, the group plans to acquire a 70 percent stake from Deutsche Bank’s RREEF and the remaining 30 percent from Italy’s Borletti Group.

De Cesare told WWD the Qataris’ interest in Printemps stems from the department store’s “long-term potential, good track record and growing leadership position in luxury retail, not only in France and Europe, but worldwide.”

“They don’t like things that are risky,” he assured. “They are very focused on building long-term assets.”

Since de Cesare joined the company in 2007, the focus has been on rebuilding and investing into brands. Now, he said, it’s time to spread out.

That’s big news for the Art Nouveau gem on Boulevard Haussmann, originally built in 1865, which has not opened a new store since 1982.

“We are targeting the top 10 cities in France,” de Cesare said in an interview. In the frame are three openings: in the harbor of Marseille in 2014; at the Carrousel du Louvre in Paris, also in 2014, and in Cagnes-sur-Mer on the French Riviera in 2015.

De Cesare would not reveal which international locations he is eyeing, as “it is too early to call.”

The chain’s new flagship in the French city of Strasbourg, which opened Saturday, will set the template for Printemps’ future face.

“At some chains, you get the feeling of being in a box, but we don’t want that. Every new store will be tailored,” he said. “The vision I have is to be a department store haute couture, where everything is unique and hand-made.”

For the Alsatian branch, which de Cesare dubbed the “Guggenheim of Strasbourg,” the group employed local architect Christian Biecher, who already put his stamp on Hong Kong’s Harvey Nichols. The retailer also tapped a group of local artists, including Julie Legrand and Christian Melaye, who will expose their works at the store for six months at a time.

Following “a radical refurbishment” that lasted two years, the original five buildings have become one, comprising seven floors of 10,760 square feet each.

The branch’s new facade is striking. Made from glass and aluminum and evoking large pleats of fabric, it’s an utterly modern foil to the city’s more traditional architecture.

Inside, escalators have been moved from the middle to the front of the building to bring in more light, a fact that is much appreciated by local customers since “the weather there is not the best,” said de Cesare, who expects sales to jump 20 to 30 percent compared to before the renovation.

“We have invested a lot into merchandising and product presentation. Forty percent of the brands present are new,” he said.

Showcasing women’s and men’s fashions, accessories and home wares, the store’s most outstanding feature is probably La Belle Parfumerie, with a so-called “scent room” built on gray marble in its center. It is home to a number of niche brands including The Different Company, Maison Francis Kurkdjian and Diptyque, underscoring the chain’s effort to become more exclusive at a time when “people buy a bottle of perfume as if it were a pack of cigarettes,” de Cesare lamented.

Printemps’ overall reorientation toward luxury “has absolutely paid off,” de Cesare said. “Our sales have increased more than 30 percent in the last four years, and our profitability more than doubled.”

He said whereas the company was worth 1 billion euros, or $1.3 billion at current exchange, six years ago, it now stands at between 1.6 billion to 1.7 billion euros, or $2.08 billion to $2.21 billion. “That’s clearly an increase in value. When you consider that the past six years have been very difficult for retail, with many [companies] going out of business, we have been outperforming the market,” de Cesare said.

He projects Printemps will grow another 30 percent within the next five years.

Asked whether the chain had the capacity to grow beyond that, he answered: “At the end of the decade, we need to see where we are, but we are looking into e-commerce and we’ll play internationally,” he said, adding that he doesn’t know why “the unions came up with this fear that we were transforming Printemps into a mall, closing down the chain and cutting jobs. This is absurd. We are by definition creating new jobs with our investors committed to the new chain, continuing the current strategy and management. We are securing a brilliant future for Printemps.”

The Qatari quest has caused heated debates in France over who and what would be the best solution for the historic department store, next-door neighbor of Galeries Lafayette, which also expressed a desire to own its rival.

The unions deplore the fact that the identity of the Qatari investors has not been revealed to them, posing “questions of responsibility,” as Disa appears to be an investment fund “without proper funds in its bank account,” said Georges Das Neves, secretary general of the Printemps union. “We don’t know if it’s just a letter box where money comes and goes. Who do you call should the company go through difficult times?”

The unions are also balking at what it characterizes as exorbitant six-figure fees to be paid to Borletti Group, which has confirmed it would remain at Printemps for a transitional period of seven years to oversee the execution of the retailer’s strategy.

Das Neves said this comes at a time when the unions are in the middle of renegotiating the salaries of more than 3,000 employees, pushing for a “collective raise of 2 percent. If Mr. Cesare agrees, the Qataris will, because they find his management is good.”