By Molly Prior and Rachel Brown on January 22, 2010
View Slideshow 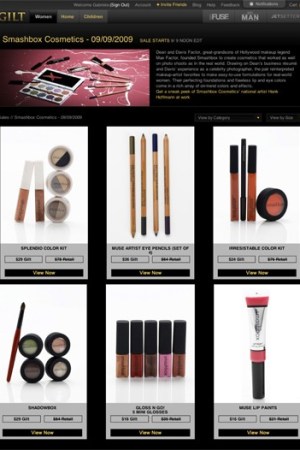 The growing pool of members-only sample sites boldly tout steep discounts, as much as 80 percent on beauty items. But inventory issues and aggressive promotions at brick-and-mortar stores have made the venture online more palatable, particularly to smaller companies. None of the major beauty brands have been spotted on the sites — at least so far.

The spoils of an online sample sale can be alluring. Industry sources estimate a beauty brand can move thousands of units, or roughly $50,000 to $60,000, over two to three days, the average length of a sale. As a point of comparison, the average segment on a TV shopping channel generates $8,000 a minute in retail sales, said sources.

“Initially, everybody was terrified,” said Jill Sherman, cofounder and chief marketing officer of BeautyTicket.com, which sells premium beauty brands for up to 85 percent off. “[Brands] started to realize that the recession was not temporary and that they are going to be stuck with this merchandise they can’t sell.”

BeautyTicket.com went from offering five brands at its launch last spring to a steady rotation of 15 to 25 brands, including Smashbox, Pop Beauty and Fusion Beauty.

The sites are a cross between a magazine, a brick-and-mortar-store and a TV shopping channel, suggested one beauty executive. Most importantly, they offer chief executive officers another avenue for sales in a tough economic climate.

It’s not a strategy advocated by all in the industry, apart from selling through excess inventory or older packaging.

“In the long term, they will never get the volume [on these sites] that they will get at retail,” said Jani Friedman, a managing director of the Demeter Group, a boutique investment bank. She advises beauty firms to stick to one or two key retail partners, which often includes a TV shopping channel.

Some sites say they offer brands a more discreet outlet to sell their wares at a discount. In fact, Rue La La, an invitation-only private sale site with 1.2 million members, declined to discuss what beauty lines it has featured in its 48-hour sales. Earlier last week, the site hosted a Bare Escentuals sale, and in the past it has worked with the spa Exhale. Rue La La added the beauty category last February and spa packages in May, said Stacey Santo, vice president of marketing communications.

Gilt Groupe began testing beauty brands in March, hosting sales for Perricone MD Cosmeceuticals and Smashbox Cosmetics. It has since dedicated an entire team to the category and widened the assortment to include fragrances and devices, like Clarisonic and Baby Quasar.

The site generally offers a 20 to 60 percent discount on beauty products.

She said some brands, namely DDF and Perricone, have already appeared multiple times on the site, and given Gilt’s luxury apparel offering, it is not perceived as a discount vehicle.

Fellow online sample sale site Ideeli has had 80 percent sell-through on beauty since introducing the category in November with a 50 percent-off sale on M Labs skin care, said Elizabeth Musmanno, a brand and marketing consultant for Ideeli. The company also has hosted a sale for Tarte cosmetics, and on deck is a presale planned for an upcoming Aveeno collection.

The site boasts some 1.5 million members, and hosts sales events with discounts of up to 80 percent. It also generates revenue from marketing platforms, including sampling programs to drive trial of the product and members to a brand’s own site or off-line retailers, and promotional vehicles, like product giveaways. Musmanno said Ideeli can help retailers and brands drive traffic to in-store events.

For instance, during New York Fashion Week next month, the site is promoting a pop-up shop with Pop Beauty, where the cosmetics brand will offer free makeovers. Musmanno said Ideeli’s revenue is growing by 20 percent each month. In December, the company received $20 million in financing from StarVest Partners, Constellation Growth Capital and Kodiak Venture Partners.

The newly launched Market for Drama is a beauty-focused private sale site that intentionally slows the frenetic pace of its peers, where sales usually are short-term affairs. Founder and ceo Stephanie Nash handpicks the items displayed in the site, favoring unisex skin care and fragrance brands including Själ, M Lab and Histoires de Parfums. Sales on the site, which launched Nov. 17, tend to last three to five days.

“We are trying to create a relationship. Our intent is not just to flip product,” said Nash, who previously worked on the vendor side, including in posts at La Prairie and Clé de Peau. “Market for Drama is not a sample-sale Web site. It’s more of a promotional tool for brands,” said Nash, noting the site’s e-commerce model is “value by choice,” an alternative to gift-with-purchase and discounts on excess goods.

On MFD’s homepage, one side of the minimalistic-style site features a weekly sale spotlighting a single brand for up to 70 percent off, and the other is dedicated to the Journal, a photo-heavy, content-driven space. The aim is to post weekly narratives from contributors, ranging from photographers to stylists.

“We challenge how beauty should be presented,” said creative director Lukus Eichmann.

Also introduced in November is The Skinny, which hosts a sale at least once a week. The site offers discounts of up to 70 percent on brands, which have included Perricone, Lisa Hoffman Skincare and 100% Pure.

“In the Nineties and early 2000s, if you could get into Neiman’s or Bendel’s, you were set,” said co-founder Lauren Fornes. “Unfortunately, those aren’t profitable models anymore. There has to be something new.”

Online membership outlets argue they can build audiences for beauty brands and be an integral component of a long-term strategy to engage customers. To do so, they aid the brand’s marketing efforts. The Skinny, for example, creates videos touting a brand’s products. Some sites enable brands to better understand customers with a variety of data that, at the private sale Web site HauteLook, can be accessed in real time during a sale to reveal customer demographics.

“Initially, it may have been something to do with the recession,” Paula Scandone, vice president of beauty for HauteLook. But now, she continued, “It really comes down to acquiring new customers. As we know, customers are not shopping the same way they used to, and they never will again.”

Scandone said HauteLook beauty customers buy anywhere from two to three items per sale, which translates to 2,000 to 15,000 units. And price point doesn’t seem to be a barrier, with items selling from $5 up to $500. She said research on new customer acquisition found brands experience double- to triple-digit increases in traffic on their own Web sites as a result of HauteLook sales, and between 5 and 8 percent of customers replenish the product they purchased during a sale within a six-month period.

Still, there are brands that remain unconvinced these sites are positive for the beauty industry. Richard Murad, general manager of the skin care brand Murad, decried the “closeout nature” of the sites and indicated a brand’s participation with them could harm its performance at traditional retail.

“We just can’t see any justification in giving special pricing to online sale site companies that have not supported Murad through the years to basically compete with our existing customer base,” he said. “To expect the Murad consumer to be excited about paying a fair retail price for our goods once they have purchased the products from an online sale site that we have ourselves sanctioned seems to be asking too much.”

Woodley & Bunny salon co-owner and distributor of niche beauty lines, namely SachaJuan and Six Scents, Misha Anderson said, “I don’t want to use discounts as a motivator.” She added after a tough year, many brands are trying to move away from discounting in 2010.

Art Swanberg, ceo of prestige beauty private sale site The Fairest, acknowledged the online closeout model has limited potential. Because beauty brands don’t release entirely updated collections as frequently as fashion brands, he forecasts the drive to get rid of excess inventory will ebb as the economy improves. “If you are a brand in skin care and cosmetics, and you are constantly going to one of these big flash sales sites and having 50 to 70 percent off, that will kill a brand,” he said.

To survive when excess inventory becomes scarcer, The Fairest is working to provide a more tailored experience for the customer to get them excited to try new products. “We find ourselves at the epicenter of traditional e-commerce, home shopping and flash sales,” he said. “On a weekly basis, we are only going to be dealing with a handful of brands and focusing on their message. It is much the same as if you were in a small retail environment.”

When it launched in September, The Fairest’s first-year revenue goal was $5 million, a drop in the bucket compared with large horizontal private sale sites such as Gilt Group, which was projected to reach $400 million in sales in fiscal year 2009, and Rue La La, which has notched $100 million-plus in annual revenues.

Online beauty private sales have a long way to go before they rival traditional beauty distribution choices. Beauty accounted for a fraction of HauteLook’s sales last year, estimated at between $50 million and $80 million across all merchandise.

But those behind beauty in the online private sale movement are confident it will become a standard of the industry.

Swanberg said, “This category can be an extremely large category. It could be half-billion pretty easily. There is that opportunity if someone really jumps on it and occupies the space.”