Pronovias is trimming its stable of designers as the bridal manufacturer transitions to becoming more of a retailer. 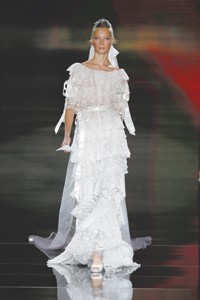 BARCELONA — Pronovias is trimming its stable of designers as the bridal manufacturer transitions to becoming more of a retailer.

Alberto Palatchi, founder and chief executive of the company, based here, said Pronovias’ licensing deals with Emanuel Ungaro and Badgley Mischka will end this year and will not be renewed. That will leave Pronovias’ portfolio with four designers — Valentino, Elie Saab, Manuel Mota and the southern Spain-based Hannibal Laguna. Next year will be Valentino’s second collection for the company.

“It’s important not to spread yourself too thin; I’m a retailer now,” Palatchi explained, referring, in part, to the November opening of a company-owned five-story flagship on London’s New Bond Street and next year’s scheduled opening of the largest Pronovias store in the world, an 18,000-square-foot location on New York’s 52nd Street. In addition, the group plans retail launches in Tokyo and Taipei by yearend, he said.

Earlier this month, the company invited 1,600 specialty retailers and 60 foreign journalists from 46 countries to Barcelona for a preview of 2007. The guest list, mainly customers from the multinational company’s global network, included 60 U.S. retailers and major buying groups from the U.K., Italy and Germany, according to a Pronovias spokeswoman.

In addition, retailers from Australia, New Zealand, South Korea and Kuwait were first-time participants in the company’s annual presentation, which kicked off with a nighttime catwalk show in the Barcelona fairgrounds’ Pabellón Italiano featuring body-conscious silhouettes, ruffles and bows in every size and guise, laces, Empire styling and dropped waists.

All in all, retailers attending the 2007 preview were generally upbeat about the offerings. Mindy Woon, bridal manager at Bergdorf Goodman, said, “I liked the collection very much. Next year’s brides will have plenty to choose from. It’s feminine with lots of details, texture, light fabrics, ribbons, lace — and it’s very salable.”

Woon said key bridal trends include innovative textures and more formal bridal styling, with casual chic on the back burners. She praised Pronovias’ double-layered lace treatments and “strategically placed” ruffles. “I really liked Elie Saab,” she said. “It’s very pretty with gorgeous use of flowers and unusual lace. But Manuel Mota [the signature line of Pronovias’ in-house designer and creative director; Bergdorf’s has the New York exclusive] is the strongest for us. His style speaks to our bride and the label offers a lot of bang for the buck.”

Karen Jones, owner of Gowns By Design in Mechanicsburg, Pa., said she was looking for alternatives to the ubiquitous strapless neckline. V-necks were of particular interest, “because we don’t do one-shoulder.” She noted that dresses with dropped waists are a tough sell in her store.

Echoing other U.S. retailers, Jones said shades of ivory and gold are her top sellers. “White is almost nonexistent.”

Independent retailer Mercedes Morrissette, owner of Bella Mia Bridal in Savannah, Ga., said she was shopping for form-fitting silhouettes to the high hip with flared skirts and slightly curved or V necks. “My brides are 27 to 37 years old; they’re college-educated, sophisticated and they know fashion — and they love Manuel Mota. I’ve been buying Pronovias for seven-and-a-half years, but no designer gowns.”

Armine Chanessian, owner of R-Mine Bridal Couture, which has two locations in Los Angeles, said quality for the price is “a very good selling point.” She said she was picking up Pronovias’ lower-end line. “It’s more interesting. I’m looking for something different, like crushed metallic organzas, but I’ve bought Elie Saab and Valentino in the past and I will be buying them here, too,” she said.