Pronovias Struts Its Stuff for 2006

BARCELONA — Pronovias, the world's largest bridal manufacturer, knows how to put on a show and U.S. retailers responded — snapping up innovative gowns and body-conscious silhouettes in soft, tissue-thin fabrics and feathers. 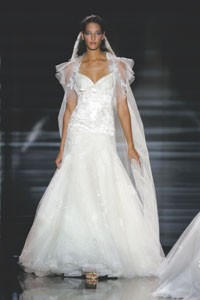 BARCELONA — Pronovias, the world’s largest bridal manufacturer, knows how to put on a show and U.S. retailers responded — snapping up innovative gowns and body-conscious silhouettes in soft, tissue-thin fabrics and feathers.

“I’m trying out feathers for the first time,” said Mindy Woon, bridal manager at Bergdorf Goodman. “Our brides are a little more sophisticated — they’re looking for something different like beaded lace and novelty fabrics.”

Elena Grapsas of Ultimate Bride in Chicago, said she was shopping for couture gowns “with a difference, something nobody else has.”

Pronovias invited more than 1,500 specialty retailers and journalists from 45 countries to its hometown on June 17-18 for a preview of 2006. The guest list, mainly customers from the multinational’s global network, included 500 retailers — 65 from the U.S. — and major buying groups from Germany, Italy and the U.K., organizers said.

“Valentino was not a disappointment; he had four pieces to die for,” said Mara Urshel, president of I. Kleinfeld, the famed Brooklyn retailer that is to move in July to a 35,000-square-foot Manhattan store with 52 fitting rooms.

Key bridal trends are “romance, fantasy, glamour and detail,” Urshel said. “Strapless is still number one, and for the American market, white and ivory, that’s it.” Destination weddings are “still big” and, in general, weddings are alive and well, “more so then ever,” she added.

Valentino’s premier collection for Pronovias was the big draw for retailers who could afford it. Depending on the style, a Valentino gown might sell for as much as $25,000, sources said.

Pronovias makes 480,000 gowns a year, which the 41-year-old firm distributes through 3,500 sales points in about 60 countries, including 250 doors in the U.S., 115 company-owned and franchised stores in Spain and three each in France and Greece.

The next day, buyers got down to business at Barcelona’s Palacio de Congresos de Cataluna, where Pronovias sent out its in-house bridal line of more than 170 gowns priced from $280 to $3,000.

Cocktail and mother-of-the-bride collections featured beaded mesh and lace dresses with matching jackets and a few bold — and mature — prints in colors such as ruby, teal, lemon, pistachio and creamy mint. One of the best was a knee-hovering beige lace suit with hem ruffle, for $480. Prices ranged from $80 for a straightforward series of red crepe dresses to $930.