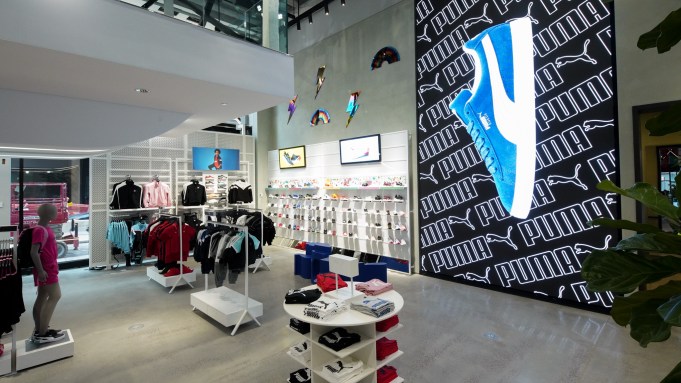 “This is not only a store. It’s a place to communicate with customers — a global flagship so the brand can talk to, interact and engage with customers,” said Bjorn Gulden, chief executive officer of the Germany-based Puma S.E., who visited the store on Wednesday.

It’s no surprise, then, when asked if the flagship experience could be duplicated elsewhere, Gulden replied: “Probably Shanghai. We are always cooking up something.”

Puma is building a new North America headquarters location in the Somerville section of Boston, and considering three to five full-price brand doors over the next three to five years in North America, or at a rate of about one a year. The retail plan is conservative and will incorporate elements of the flagship, depending on how successful they turn out. In North America, Puma operates only four full-price stores as well as 85 outlets in the U.S. and 18 outlets in Canada.

The two-level, 24,500-square-foot Fifth Avenue flagship, with 18,000 square feet for selling, is by far Puma’s largest and most technologically advanced store in the world. Among its special features geared to increase “dwell time” by shoppers and bring a big lift to revenues:

• A zone for New York-themed products sold only at the flagship.

• A virtual skill cube to test your running and soccer abilities.

• A DJ area on the mezzanine.

• Four kiosks to buy online and get free shipping to your home or the store.

• Three interactive electronic tables to scroll through the Puma timeline and shop online.

With the flagship opening, Puma joins the pantheon of athletic brands — Nike, Adidas and Asics — already operating flagships on Fifth Avenue, within a few blocks of each other.

“We’re on the 50-yard line on Fifth Avenue. It’s the best location on the avenue,” said Russ Kahn, senior vice president of retail, Puma North America, who was instrumental in selecting the site.

The flagship wraps around the southeast corner of 49th Street, providing major exposure. The site was previously occupied by American Girl, which moved to a smaller location within Rockefeller Center. Puma also will be benefited by feeding off traffic from Saks Fifth Avenue, right across the street.

Puma’s dramatic all-glass facade mimics the pattern on the soles of its classic suede sneakers and enables views well into the store, drawing shoppers in. Right past the entrance, there’s a giant, nine-foot long, three-foot high replica of Puma’s classic suede lifestyle shoe.

With its 27-foot high ceiling, there’s an airy, spacious feeling, though there’s plenty of product, zoned off by category, on the two selling levels.

“There are things to tingle your senses without overwhelming you,” said Kahn. “The giant video wall in the back of the store isn’t overwhelming. It doesn’t hit you in the face but it grabs your attention and has really cool content.

“And there are little touches through the store to make you feel more comfortable, particularly female consumers, like the walls having a green patina and the living trees in the seating areas. The fixtures are very light, not heavy metal. They’re thin gauged.

“It all helps you feel more at home as opposed to being in a meat market just trying to get your money. It’s all about the product, not the store itself. The store is not over-designed.” Design Republic worked with Puma’s global design team to create the store.

Puma’s timing for the flagship couldn’t be better. It’s in advance of the holiday season and ath-leisure and sneakers are perhaps the hottest categories in fashion due to the casualization of America and the wave of designers, athletes and celebrities developing or endorsing products.

Last year was Puma’s biggest in volume and profit growth. The Herzogenaurach, Germany-based brand generated 4.6 billion euros in revenue and 419 million euros in earnings before taxes, interest, depreciation and amortization.

Bestsellers at the store so far have been the Puma RS-X men’s and women’s lifestyle running shoe, priced $110; the new Cali lifestyle shoe for women, priced $80 (Selena Gomez is the ambassador for it); the Clyde Court men’s performance basketball shoe, $120; men’s and women’s T7 track jackets with the seven-millimeter stripe down the sleeve, priced $70, and for kids, the Sesame Street collection of shoes, apparel and accessories including the Cookie Monster shoe. The collection of performance and sport-inspired lifestyle products covers soccer, running, training, basketball, golf and motorsport categories.

“Ath-leisure has really started to become a viable fashion choice for men and women,” said Kahn. “It used to be for just hanging out on the weekend. But now people are wearing it to go out to clubs, for dinner and for parties. It’s become mainstream and part of the fashion culture, and it’s more resonant with Fifth Avenue and accepted by luxury brands than it ever was.”

Kahn characterized the Fifth Avenue site as Puma’s “first true flagship” for Puma North America and designed to be “completely engaging and interactive for the consumer in ways we have not been able to in the past. The whole purpose, with things like Birch Coffee and customization, is to increase the consumer dwell time and the relationship with the brand. You want to create an emotional connection with the consumer, a relationship that’s not just transactional.

“We will learn from this as we grow the business,” with additional stores. “Ultimately the goal as soon as this works the way we anticipate, is to start opening other brand stores throughout the U.S. and adapt some of the Fifth Avenue experiences globally to our worldwide stores. But there is nothing like this Fifth Avenue flagship anywhere in the world and we have over 3,000 stores.”

He acknowledged the agenda for retail expansion in North America is very conservative. “We want to make sure we are in the right cities and the right markets where we can really show the full breadth of the brand. We are exploring Chicago, L.A., Miami, Toronto and Montreal,” for potential stores.

What makes Puma distinctive from the competitors on Fifth Avenue? “We’re a culture rooted in sports, the sports lifestyle and street culture. All of our products are grounded in sport but have a great street appeal. We have a great balance,” he said.