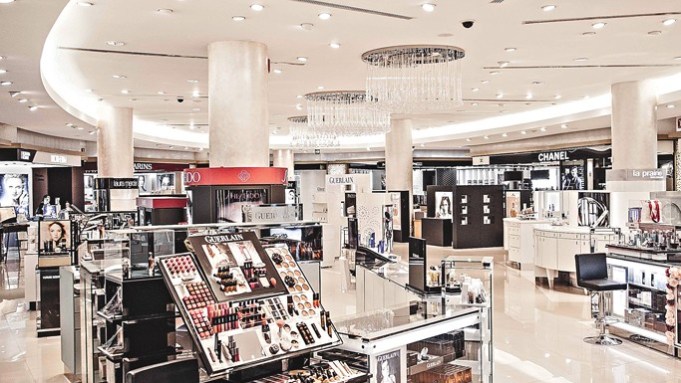 The beauty market is a tough, highly competitive one in Mexico.

So to keep holding steady in the fray, El Palacio de Hierro has mounted a series of events and additions in the stores. The retailer hopes beauty sales will grow 4 percent this year, thanks to strong makeup marketing efforts at a time when Latin America’s second-largest economy is growing at a slower-than-expected pace and competition is heating up.

According to Adriana Lizarraga, director of El Palacio’s beauty division, the retailer strove to market its leading makeup brands during its annual beauty festival, which ran from June 17 to July 7, helping bolster sales beyond expectations.

The retailer also opened a Chanel pop-up store in its Antara store in Mexico City in May — an effort that has sparked other brands’ interest to open similar doors next year, Lizarraga said.

This year’s festival — and other near-term makeup marketing efforts — will focus strongly on young people.

“We are focusing on young people and on doing more dynamic things with them, such as allowing girlfriends to try products on each other or offering makeup sessions with renowned makeup artists,” Lizarraga said.

In other efforts to grow sales, El Palacio will also exclusively launch in November the Michael Kors Color brand in Mexico for a three-year term, Lizarraga revealed.

Asked why makeup has become so key for the retailer, Lizarraga said the category has become increasingly competitive in Mexico, largely due to French perfumery chain Sephora’s successful arrival in fall 2011. The LVMH Moët Hennessy Louis Vuitton-owned retailer, which has a thriving makeup enterprise, has made the product much more popular by bringing an array of exclusive and cleverly marketed brands, analysts say.

Salcido said Sephora’s 2013 expansion plans, combined with Liverpool and other rivals like Sears’ and Sanborns’ aggressive expansion schedules, will make it difficult for El Palacio to beat competitors’ growth on an aggregated basis, including new stores. However, he said the retailer should be “on par” with rivals’ same-store sales growth.

“In the past few years, we have grown above the market, except for last year, because our rivals opened so many stores,” Salcido said. “The competition is brutal.”

El Palacio’s projection of 4 percent growth in same-store beauty sales this year is down from a previous forecast of a 7 percent hike to around $100 million. Last year, sales rose about 8 percent on a similar basis — and 11 percent after including two new store openings.

Despite Sephora’s splash, Lizarraga stressed El Palacio will continue to differentiate itself from the chain, as well as Liverpool (which caters to Mexico’s middle class) and other competitors, by stocking a larger and more diversified portfolio of luxury labels.

Moreover, El Palacio targets women ages 30 to 50 compared with Sephora’s target of 18- to 26-year-olds, and offers makeup and skin-care treatment cabins for each brand.

By 2017, the retailer hopes to maintain or slightly increase its current Mexican beauty market share, which stands at 20 percent compared with 50 percent for Liverpool, which is close to opening its 100th store. The chain also hopes to maintain a high-single-digit annual growth rate and or slightly lift it, depending on trading conditions and how Mexico’s economy performs.

The effort won’t be easy, however. Despite the competition, Mexico’s beauty market is becoming increasingly mature and saturated, with consumption turning sluggish on the back of a weakening economy.

“The market is not as buoyant as a few years ago when there were many new brands and new malls opening,” Lizarraga commented, adding that the industry grew 14 percent in 2010 and 12 percent in 2011.

For 2013, top industry association Canipec is predicting the market will grow 6 percent to just less than $10 billion, though it claims promotional campaigns to promote emerging beauty categories should boost future growth rates to “sustained” double digits.

Beauty festivals apart, one way El Palacio hopes to grow sales is by opening a slew of stand-alone beauty shops across Mexico. El Palacio has no plans, however, to deploy a perfumery chain like Liverpool’s Kybela.

Liverpool and Kybela did not return calls seeking comment.

El Palacio currently operates six stand-alones for MAC and two for Kiehl’s, and plans to open one for Benefit Cosmetics soon.

“We plan to open more of these pop-up stores in the future,” Salcido said. The shops, which will be opened under joint ventures with the brands, could be located in a mall near an El Palacio store or in a shopping plaza without one, depending on the location’s strategic benefits, Lizarraga added.

By 2016, El Palacio could have three more MAC freestanding shops and three more for Kiehl’s, she said.

El Palacio also intends to improve the layout and shopping experience of its stores’ beauty sections, which usually measure about 10,700 square feet. In 2008, the chain changed the section’s layout to an in-store shop structure, giving each brand 320 to 430 square feet to showcase its products in a more boutiquelike and organized fashion.

Lizarraga said future stores will continue to boast this layout, which she said has been “very successful.”