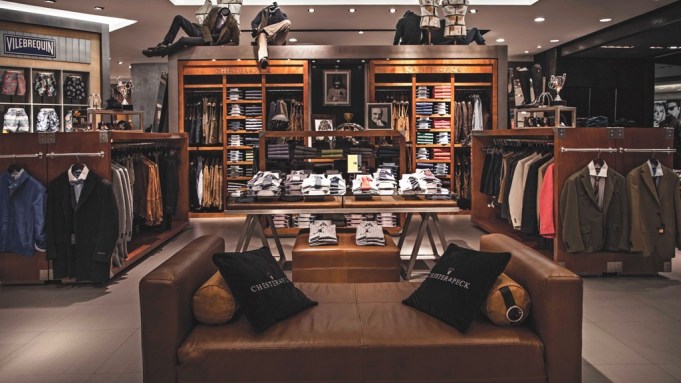 The Mexican man loves Italian brands — so much so, in fact, that 60 percent of the merchandise in El Palacio de Hierro’s men’s department is of Italian origin.

“Our [biggest] brands are from Italy,” said Alvaro Arismendi, divisional merchandise manager for the retailer. “Made in Italy is very important in Mexico. It represents value.”

And while American labels are not as well known in Mexico, they are beginning to make inroads.

And not even an American household name like Michael Kors means much to the Mexican consumer right now. “We’re just starting to carry Michael Kors for fall,” he said, noting that the brand is only now beginning to develop a following there. “The Mexican customer needs time.”

One exception is Polo Ralph Lauren, which is the third-ranked brand in the men’s area.

Spanish brands such as Adolfo Domínguez and Purificación García are also popular with the El Palacio customer. “Spanish brands have been in Mexico City for more than 10 years,” he said. “So they’re top-of-mind for consumers. They’ve been here a long time.”

For most of its early years, Arismendi said, El Palacio carried mainly local Mexican brands, but the mix has morphed over time to rely much more heavily on European labels. And so today, “Our most important brand is Salvatore Ferragamo,” Arismendi said. “Second is Ermenegildo Zegna, third is Polo Ralph Lauren, fourth is Hugo Boss and fifth is our private label, Chester & Peck.”

Arismendi, who shops Pitti Uomo in Florence twice a year, as well as showrooms in Italy and the U.S., said artisanal brands too have yet to find a following in Mexico.

He said when he visits New York, he will walk through Barneys New York, Bergdorf Goodman and other well-known American stores, “but it’s a different market,” he said. He appreciates the artistry of the small labels that these stores carry, but it won’t work at El Palacio. “In New York, there are tourists from around the world walking the streets and visiting the stores. But not in Mexico.”

Instead, El Palacio caters to a high-end local customer — lawyers, politicians and other businessmen who look to the company’s 13 full-line stores and three boutiques for their wardrobing needs. “Our customer is luxury Mexican society,” he said.

Indeed, the annual report attributes the company’s success to its laser focus on this segment of the market. “The luxury segment continues to be central to the company’s strategy,” the report said.

As in the U.S., younger men are turning to slimmer-fitting silhouettes in suits, especially in urban areas such as Mexico City, he said. However, these younger guys are gravitating toward private-label offerings, which retail for around $300 to $400. In contrast, the older customers tend to purchase high-end European brands such as Zegna, Canali, Pal Zileri and Hugo Boss, with suit prices averaging around $1,300, he said.

Even so, this represents a shift for the company. “We started selling suits to young men around five years ago,” he said. “Before that, it didn’t exist. It started when Zara came to Mexico City and introduced it. After that, we began offering it in our private label.”

Another area of strength within men’s is made-to-measure.

“We have made-to-measure events with Loro Piana two times a year,” he said. Other brands also offer this service to the Mexican customer, including Zegna and Pal Zileri. “It’s a very important business to us and growing with different brands.”

He related a story about a customer at the Monterrey store who bought $100,000 in suits at a Loro Piana event — suits that cost around $15,000 each. “We have important customers with a lot of money,” he said.

Beyond clothing, Arismendi said contemporary sportswear is also on fire at the stores. “It’s been growing more than the average over the past two years,” he said. One of the strongest brands is Boss Orange.

He said the contemporary brands appeal to a “young man who is just starting to work. He’s 25 years old, he’s an architect or something like that in the professional area. He’s modern and contemporary.”

Arismendi continued, however, that “Our most important business continues to be [tailored clothing] in terms of turnover, but we see how contemporary is growing every day.”

Men’s wear is offered in all of the company’s stores, and Arismendi said the mix in the Mexico City flagship is the same as in the other areas. “We carry the same merchandise in all our stores. Ermenegildo Zegna is in 98 percent of our stores.”

He said El Palacio has a database of around 700,000 customers and keeps in contact with them through a twice-yearly catalogue that provides details on everything new and noteworthy within the men’s arena. In addition, the store advertises in local newspapers and has been beefing up its social media presence to communicate with its men’s wear shoppers.

Arismendi, who has run the men’s division at El Palacio for seven years, is a veteran men’s merchant. Born in Argentina, he attended law school but opted for a career in fashion instead. He worked for Yves Saint Laurent as a men’s wear manager in his home country as well as Chile before joining Haber’s Group, a retail conglomerate, overseeing Robert’s, High Life and Hugo Boss stand-alone stores in Mexico.

He said that upon joining El Palacio, he worked with many of the same brands that he’d carried at Haber’s. “But some, like Canali and Burberry, are exclusive to us.”

Looking to the future, Arismendi said he expects men’s wear to continue to grow in popularity at El Palacio. Besides brands with a contemporary sensibility, he expects tailored clothing to continue to be the leader five years down the road.