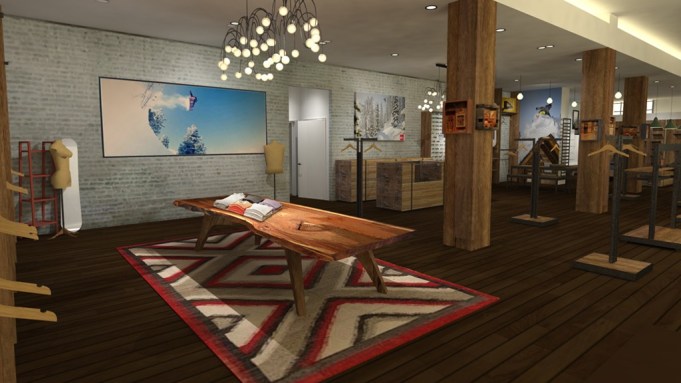 The Huntington Beach, Calif.-based action-sports apparel and retail company’s stores in the Americas haven’t had a bad year so far, delivering positive same-store sales results in each of the first three quarters, but Paul McAdam, the senior vice president and general manager of retail who joined Quiksilver last December from AllSaints North America, believes the stores could be doing even better if only they looked and functioned better. He is embarking on an overhaul of their operations and unveiling updated store templates for Quiksilver and Roxy early next year, marking a significant investment in the stores that he asserts will boost revenues and profitability.

A big reason why the current stores have become indistinct is that brand messages are muddled within them, according to McAdam. Quiksilver has lumped together the brands under its umbrella — namely Quiksilver, Roxy and DC Shoes — in the stores. That will change. McAdam is adamant the brands should be housed separately in their own dedicated full-price stores. “They speak to different consumers,” he explained.

Kenna Florie, vice president for sales and marketing for Quiksilver women’s, added, “The Roxy brand is such a powerhouse when it comes to the juniors market that to not give them their own store, with the outside of the store saying Roxy, is almost doing a disservice to Roxy.”

With the brands out on their own, McAdam wants to make sure they are in retail environments that show them in their best light. That means spending more money. McAdam estimates that in the updated retail templates for Quiksilver and Roxy, which are slated to make their debuts in the spring at units in Santa Monica and Laguna Beach, Calif., respectively, the dollars per square foot invested in building the stores will double, although costs will decrease with future stores. “We haven’t spent enough on the store aesthetic historically,” McAdam said. “We’re trying to become a little bit more premium, a little bit more aspirational. We want our vertical retail stores to be the pinnacle of what we do, so it can help influence our wholesale business.”

The Roxy and Quiksilver stores will be designed to feel like beach cottages that McAdam, who worked with the firm Roger Russell Design, described as light and airy. The Roxy facade will be white, and the interior will have a white wood ceiling and aged-wood flooring. Aged-wood fixtures will be important in both the Roxy and Quiksilver stores, and McAdam emphasized the modular nature of the fixtures so the stores can be rearranged easily. He is also uncluttering the stores by scaling down the graphic presentations to key projected images and brand signage, and reducing the number of stockkeeping units.

“We didn’t really speak to our product strengths. We just tried to throw a lot of merchandise into the store and hopefully something stuck,” said McAdam. “What we’ve found is about 20 percent of the merchandise is driving about 80 percent of the sales, so we have a very long tail.” Since the fall, he added, “We’ve really shifted the way we’re buying to really focus on the top 20, so I’ve been very, very brutal on cutting the end of the tail off.…Our inventory hold is down by 40 percent, so we’ve turned a lot of stock to cash.”

It’s not just about pinpointing the right merchandise but getting the right merchandise to the right stores. Starting with the spring deliveries, McAdam has implemented merchandise allocation and planning strategies to respond to regional differences in demand for products. He said, “One of our biggest opportunities to see comp growth in retail is the planning and allocation piece. If we did nothing else, if we didn’t change any of the aesthetic of the store and if we bought better, which we are, and we planned and allocated differently, we’d see 10 to 15 percent comp growth.”

McAdam has rethought Quiksilver retail down to the staff level. He said Quiksilver is elevating retail sales associates’ salaries and uniform allowances, and enacting store-based commission “so at the end of the month, there’s an opportunity for the entire store to be rewarded if the store does X volume.” The aim is to lift the average retail transaction, which is about $50, by at least 10 percent. More broadly, he added, his goal is to increase retail sales “by 10 percent, and we’ll significantly improve our EBITDA [earnings before interest, taxes, depreciation and amortization] through operational efficiencies, buying efficiencies, payroll control. You name it, expense line items will be much more controlled.…We want all our stores to give us a four-wall contribution of between 20 to 25 percent return.”

Next year, McAdam — who has already revamped Quiksilver mountain stores in Vail, Colo., and Park City, Utah, for Nov. 16 and Nov. 19 openings to heighten their winter sensibilities in time for skiing and snowboarding — said 10 to 15 stores, including probably three to four that will assume the Roxy nameplate, would be refurbished. If the remodels prove successful, the American fleet of stores will be completely redone over two to three years. The ideal size for a Quiksilver store is 3,500 to 4,000 square feet, with 35 to 40 percent dedicated to women’s and the rest men’s, and 2,000 square feet for a Roxy store. McAdam contends that malls aren’t the ideal settings for stores. “You’ll see us opening beach, tourist, high-trafficked locations. That’s where we’ve had our success, and that’s where we’ll continue to have our success,” he said.

In Quiksilver’s third quarter ended July 31, retail sales were up 6.8 percent to $119.3 million. Third-quarter same-store sales at company-owned retail stores grew 4 percent on a global basis. At the end of the last fiscal year, Quiksilver had 117 owned stores and 16 licensed stores in the Americas. This year, McAdam predicted the store count would remain roughly the same in the region. He said, “Next year is our rebuilding year. [We are] perfecting the model and then 2014 will be about, Let’s roll it out.”